Featured Article (History)
June 2018
This page was so awesome, it had to be featured on the main page! 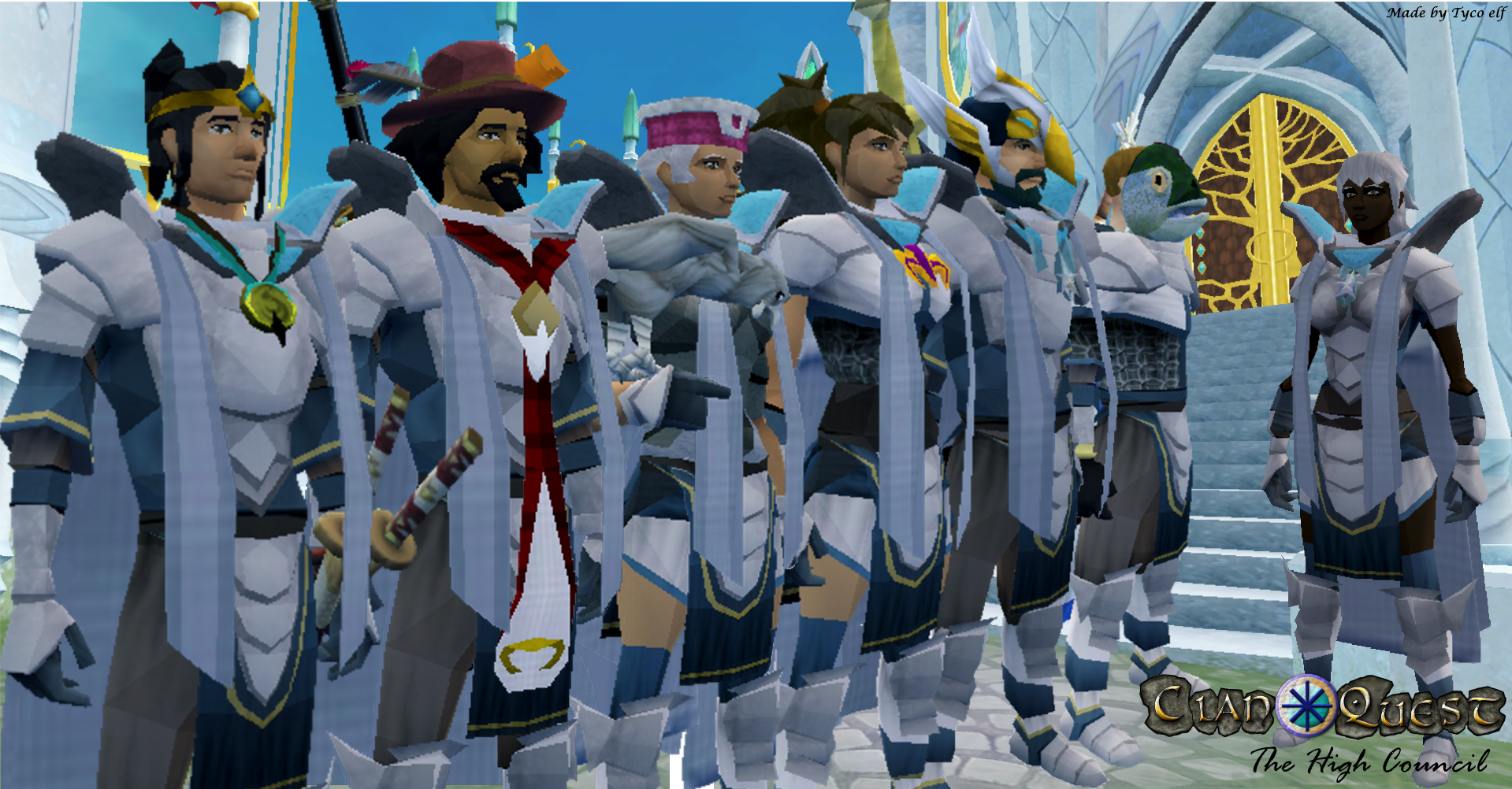 The Clan Council in RuneScape, Circa April 2016, by Tyco elf

The "Clan Council", formerly known as the "High Council", is the top administrative level of Clan Quest that oversees all website management, official branding and media creation, Guild application processing, social media, and finances. They are, in effect, the "leaders" of the Clan as a whole, but as of the implementation of the Constitution do not hold explicit power within any individual Guild that they themselves are not personally a part of.

Who is the Clan Council

As per the Constitution of Clan Quest, the Head of Clan Council is defined as:


As this says, the Clan Council's membership was originally comprised of every member who had held the rank of High Councilor before this version of the Constitution was implemented. For a new member to be promoted, they must be serving on one of the other two official Councils within the Clan structure(Honor and/or Guild) and prove themselves as fully committed to the clan and its survival. Additionally, a member must have been in a Guild for a minimum of ninety days before being elidgible for a position on the Clan Council, but for someone to be promoted any sooner than a year after joining is rare.

Like Guild Councils, the Clan Council is able to create subgroups that can serve additional functions not officially described anywhere else. Clan Council subgroups do not apply to individual Guilds, and instead are held as a clan-wide position. Members of these groups are not actually a part of the Clan Council itself, rather they were created by the Clan Council, who also directly oversees them.

Main Article: Moderators
The term "Moderators" refers to the group of people that the Clan Council has assigned additional permissions to so that they can assist with the moderation of non-Guild Clan platforms, such as clanquest.org, it's Wiki, or the Clan Discord. Members of Moderator groups are always given a cyan name to indicate their role, across all platforms.

Main Article: Content Editors
The "Content Editors" are a group that were created to manage and consistently put out issues of the clans Magazine, Questaholic. However, members of the Content Editors team have since been entrusted with handling social media, editing on the Wiki, assisting in the creation of branding, creating video content, and so on. They generally serve the purpose of creating things for the clan, whatever form that may come in.

History of the Clan Council

The original Clan Council was vastly different than the one that exists now. As the clan was originally founded on November 9th, 2009 on RuneScape, there was much less in the way of formal organization. The Clan's founders, "Draziw", "Sethron", and "Kappathegray", served as the Clan's "Generals", which was the name of the official top level rank in Clan Chat's at that time. For a time the Clan was hosted within Draziw's own personal Clan Chat, but this highly limited Sethron and Kappa's abilities to moderate and manage the Clan, and so soon after the Clan was relocated to a Clan Chat under the name "Clan Quest", where all three could moderate equally.

On January 15, 2010 the first Clan Quest Constitution was ratified, and in it the "Captains" were made an official arm of the Clan. These were members of the Clan that had completed every quest in RuneScape and achived the coveted "Quest Cape", around which the Clan was based, and the "Captain" rank was given to them to signify this achievement. However, with the ratification of the original Constitution these Captains were also given moderator priviledges within the Clan, in order to help ease the burden on the increasingly inactive Generals, who could not always be there to rectify any given situation. By February Draziw, who had been acting as the head General at the time, realized he was becoming increasingly less active and passed on his position to Kappathegray, who assumed primary leadership status over the Clan.

On March 8, 2010 the first ever Clan Quest website was launched by Early Hope, giving members of the Clan the means to communicate with each other outside of RuneScape. This meant that those who were inactive in the game could still actively interact with other Clan members. It also gave members a more permenant forum on which they could make announcements, and on March 19, 2010 the Generals did just that. For the first time since the Clan's inception, two new members were added to the General's team: ChaDMcBaDD and GL im Kody. This was a monumentous day for Clan Quest, though one that wouldn't be formally celebrated in RuneScape until a few weeks later, on April 10.

On July 14, 2010 the first major fight of Clan Quest history occurred between the new General ChaDMcBaDD and Captain CupOfChips, resulting in the former temporarily removing the latter from the Clan. While the fight was silly in retrospect, it raised a few concerns. With arguments generally on the rise, the Clan realized that while it had Captains and Generals to remove troulemakers, it really had no system in place to mediate disputes without bias. To answer this, the Generals devised the "Honor Council", which was implemented on August 1, 2010 under the leadership of Hemsky. This further seperated power among Clan Members, though the Generals still maintained a prominent leadership role.

September saw the return of Draziw to RuneScape activity, and with Kappa's activity in decline, he resumed his duties as head General in the clan, a position he would hold for the next few years. Soon after, on the 26th, Artson was promoted to the Generals group. The next month, October, would prove to be an interesting one though, as on the 1st of that month changes were officialized in the Constitution that legitimized the Honor Council and strengthened the Captains. On the 17th, though, the Generals were forced to remove one of their own when GL im Kody was discovered to have been cheating in RuneScape. "Botting", as it was called, was perhaps the worst sin in the game at that time, and still is, and as a violation of both Clan and game rules, Kody was promptly removed. This would be the only incident of a Clan Councilor actively being removed from the Clan or Council. However, a few weeks later, on the 31st, 82ndAirborne was promoted to General, once again bringing the groups numbers to six.

The Clan continued to grow for the next several months, and during this time the Captain Tohtli led an effort to upgrade the Clan's website, resulting in the creation of clanquest.org on February 5, 2011. This would ultimately play a large part in the decision for Tohtli's eventual promotion to the General's on November 27th of that same year. Before that, though, RuneScape Clans experienced a major update: the Clan Camp. This implemented a far more official version of Clans complete with additional tools for recruitment and member management. There update came in a few waves: the base update on April 16th and a Clan "Citadel" on July 26th. On May 10th, though, the new Clan structures were given significantly more physical ranks to work with, and the "General" rank was no longer the top level. As a result of this, the ranking within Clan Quest shifted. "Captains" became the new "Generals", and the "Generals" became "Administrators", but it was at this point that the term "High Council" began being used more commonly to describe the group.

With the newly provided Clan tools, Membership on the rise, and a growing body of "Generals", or Low Councilors as they were sometimes being called, the High Council slowly became more of an administrative force rather than a day to day one. They still served as active leaders and role models in the community, without a doubt, and they alone determined most of the important clan policies, such as those on recruitment. Still, the High Council continued to grow in numbers: On April 16, 2011 both Anamona and Bigg Doggg were promoted to the group, and then Tohtli on November 27th of the same year.

As time went on the High Council's role as an administrative force increased, with the Low Council taking on more of the day to day activities. The Clan Council, while many of whom were still active, became more and more involved behind the scenes, and its growth slowed significantly. After Tohtli's promotion in November no one was offered the position until nearly a year later. On October 21, 2012 a clan meeting was held where the leaders of the Low and Honor Councils, MsKonnan10 and Skills2Quest, were offered positions within the Council. Both accepted, breathing a new life into the High Council. MsKonnan, for her part, would go on to replace Draz as the Head of High Council in October 2013, nearly a full year later.

With all the losses and drama of the last two years behind them, the High Council moved on to take a more active role in clan management once again, largely led by its incredibly active newer members. On November 10th, 2014 Cireon took over the position of Head of High Council from MsKonnan, a position he still holds to this day. Still, as time went on the High Council once again became more of an behind the scenes entity. This is not to say they were never heard from, many were still active members of the community. But at this point the day to day management of the clan was managed almost entirely by the Low and Honor Councils. And for a couple years, there was absolutely no change in the High Council's roster. This would remain true until February 26, 2016 when LizBeth voluntarily left the Clan and High Council. Liz had long been a staple in the Clan community, and so this one hit many people harder than others.

Following Sirapyro's promotion to the High Council, work began on setting up the Clan to function in other games, besides just RuneScape. The single most important part of this was the drafting of a brand new Constitution, which had not been updated since the Clan Charter was drafted in 2011. The Constitution aimed to restructure the clan so that multiple different games could have Clan Quest "Guilds", and that the High Council, now referred to as the "Clan Council", would not be required for each individual game's Guild to function. Instead, the Clan Council would oversee the Clan as a whole, managing the website, branding, and other external communication platforms, among other things.

To go along with this dramatic change in policy, the Clan Council always worked to further upgrade the website, along with the help of the Honor Councilor Shane. Between him, Cireon, and Earth the website was upgraded to a newer format, redesigned with a more modern look, and the MediaWiki framework was implemented so that users could have more free reign over creating content on the website. Much of February 2018 was spent preparing the MediaWiki portion of the site before its eventual launch coinciding with the March issue of the Questaholic Magazine.

On March 11th of that year, considering his monumental effort in upgrading and maintaining the website, Shane was promoted to the High Council. The very next day the Clan's new Constitution went into effect, officially renaming the High Council to the "Clan Council".