State of the Union

In progress. Don't yell at me (yet) -Choto 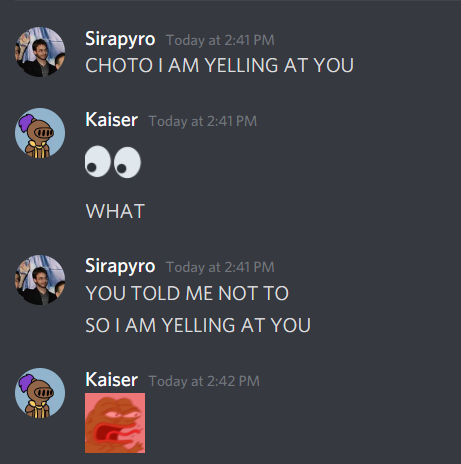 The State of the Union is the name given to official Clan meetings since its foundation up until today. These meetings have always been called for and hosted by the High/Clan Council, with the intention of announcing current/future plans, changes in direction, promotion of individuals and receiving feedback or commentaries from the membership-at-large.

There currently exist records of 8 State of the Union meetings, which are detailed below.


Following a big fight between High Councilor ChaDMcBaDd and Event Coordinator CupofChips, the High Council called for the first meeting of this kind, mainly because it had been made clear that the Clan was not prepared to mediate disputes, specially when two or more officers where involved.

At the reunion, the clan brainstormed what would be a viable solution. It was overwhelmingly decided that the Clan needed to create a third council, a group designed solely to interpret the rules of the clan, and mediate differences thereby. This group became known as the Honor Council. Said Council was set up in a unique way: The Head of the Honor Council would be selected by popular vote amongst members, who would then choose two persons from the Clan Body to assist them. All three would have the same amount of power, and none could be removed without all three being removed. Right before the meeting ended, the attendants elected Hemsky as the first Head of the Honor Council.

This meeting also prompted the creation of the Guardians, a secret group who were tasked with rendering judgement on all new recruits and determining whether or not they were a good fit for the Clan.


On this meeting, Bigg Doggg and Anamona were promoted to the High Council, while Spaded Ten, Its Drama, vss and Sir Macsimus were promoted to the Low Council. Sinistral was appointed Head of the Low Council following Bigg Doggg's promotion. It was announced that NeNe Mom was resigning as Head of the Honor Council, and the Clan elected Skills2Quest as her replacement, who in turn chose Jedi Bom and PureUranium as his assistants.

Recruitment process, a new ranking system, a uniform change and a Constitution Ammendment where also discussed.


The third State of the Union was also held in-game, with more than 30 clanmembers present. High Councilor Draziw introduced Daviddts, the leader of the absorved Wolf's Eye Clan, and it was announced that he would have the power to sponsor all his clanmembers into Clan Quest Recruitment in general was also discussed: Attendants were told that recruitment was being re-opened, after having been closed for a couple of weeks, and a review on how to sponsor and bring new members to the Clan was shared. The Razzers were recognized as an official sub-group, with MsKonnan10 and LizBeth as its leaders, and the newest Recruitment Thread {T-6} for the RuneScape Official Forums was to be opened on the following weeks.

Regarding in-game activity, this meeting also saw the foundation of the Event Thugs, yet another sub-group, that would be led by The Rerecros and MockTurtle.

Finally, the High Council urged the clanmembers to contribute to the Clan Citadel.


During the 2012 State of the Union, MsKonnan 10 and Skills2Quest were nominated and subsequently promoted to the High Council. As they were, at the time, Heads for Low and Honor Councils, respectively, both positions became available. Ytse was offered the Low Council, and Dirty Rain was nominated for Head of Honor Council, a position he received 19 days later.

The Event Thugs made a call for 5 volunteers to join their ranks. Those willing to host one event per week were invited to the group and given extra permissions on the offsite for better management and advertisement.

It was announced that recruitment would be formally re-opened by Saturday, October 27th for an indefinite period of time, at which point certain changes in requirements and procedure were to be made: The minimum amount of Quest Points needed to join the clan was increased to 200. Current members with under 200 Quest Points, however, were not affected by the change. The leader of the Razzers, Jamie k1990, called for volunteers to join the group.

Changes were made to the ranking system, with the intent to show inactive members as inactive and to display a player's weekly contribution to the citadel. High Councilor Bigg Doggg also congratulated the membership for reaching Citadel Tier 7 and unlocking Nogard, the Clan Dragon. 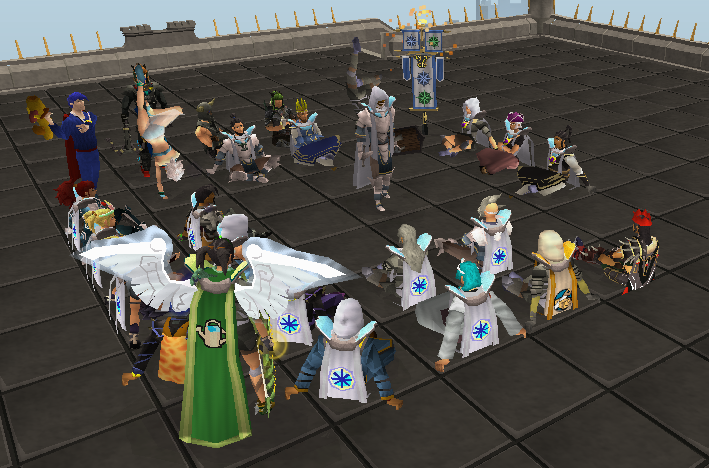 Draziw announced that recruitment was closing temporarily by November 11th and up until March 2016. He also stated that Recruitment Policies would be modified slightly, and that all members were requested to revue and suggest changes to the recruitment process of the Clan. There were also talks about rank changes, and a potential Roster Sweep, as we were close to reaching the 500 members mark.

Cireon spoke for the first time about the Offsite Revamp Team. During the meeting and for the following weeks, the High Council recruited volunteers for the project.

There was a new call for volunteers to join the Event Thugs, at the time led by Earth, and, for the first time, the Combat Marshals were open for applicants.

Finally, it was announced that the Clan Magazine, Questaholic, was back in business, and that Santa Ends would be its Chief Editor.


Nearly 5 years went by without another meeting of this sort. The Clan's communications became more quick and accesible with the opening of the Discord server, and announcements could be made there. However, on April 28, 2020, the Clan Council called for yet another State of the Union, the first hosted outside of RuneScape, and with participation from all three Guilds (RS3, OSRS and RL).

This meeting saw the promotion of Questcaping to the Moderators team, due to his work managing the Clan's social media. The speaker, Draziw, also spoke about Discord, Website and Wiki changes and upcoming plans, and recognized Evilphan's work to keep the Magazine up and running.

For the first time in the Clan's history, all three Heads of the the Guild Councils were given time to speak about the current state of the individual guilds. Shane, at the time Head of the Questing Clan of RuneScape Guild Council, announced a "competition of sorts" for any Guild member to author the new recruitment thread. Francine1225, Head of the Old School Clan Quest Guild Council, presented Doobz007 as the newest Councilor, while Dawn, Head of the Rocket League Guild Council, asked for volunteers to help with recruitment.


The 2022 State of the Union was the second one to be hosted on Discord, and it saw the presence of Clan Quest's three Guilds. During the 30 minutes it lasted, the Clan Council presented the balance of the previous year, focusing on the success of the Advent Calendar. It was also announced that Cireon was looking for one or two co-conspirators to help set up monthly board-game nights, as well as Jackbox or similar games.

A mention was given to the social media and content creation groups. Help and feedback were asked for people who would like to help manage video content, handle YouTube metadata, schedule video releases, etc. A reminder was given about the ability for all members to open new guilds, and a new call for a Dungeons & Dragons Guild was made

Xurdones was also given a few minutes to talk about the Magazine revival, what to expect and how to volunteer. The first issue of the 4th run is expected to be released in April. The representatives of the Questing Clan of RuneScape and Old School Clan Quest, Miss Alaska and Sk8r_dan_man respectively, made their own announcements about their Guilds' businesses.

Miss Alaska discussed the current activity taking place in the RuneScape Guild, such as the group questing streams, weekly minigame and PvM Gateway events, and the bingo events for Treasure Trails and boss drops. She also covered some housekeeping ("admin tasks") for the guild across the various platforms it exists on, as well as some of the future plans in the works such as templates for event preparation and an end-of-year guild reel video. 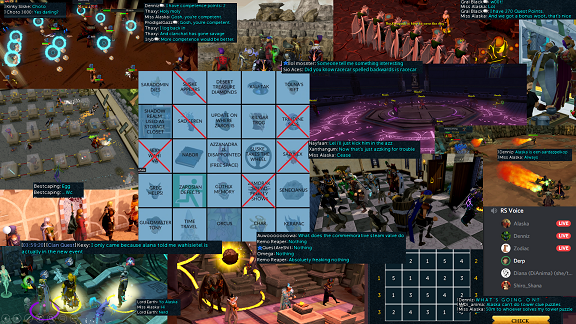 Collage of activity within the RuneScape Guild Miss Alaska presented during guild address.

Sk8r_Dan_Man spoke on the behalf of Head of OSRS Guild Council and also his sister, Francine1225. He discussed the new quests that were released in the past year: Below Ice Mountain, The Kingdom Divided, and A Night at the Theatre. Each of the new quests came with notable new training methods, equipment, and interesting lore to dig your teeth into. More recently, the Land of the Goblins quest was just released this year, so as protocol, all members with the Quest Cape Symbol were demoted to the Black star signifying 250+ Quest Points. You can also request for a Myth Cape or Legends Cape Symbol cause that looks cooler than a Black star.

He also spoke of current activities taken place within the clan, one of them being a game of tag with Brassican Prime's "Cabbage Round Shield." At the time of the State of Union, it is believed that Santa is in possession of it. The two rules of tag is simple. No tag backs to whoever tagged you. No trading within: the walls of the Grand Exchange, the walls of any bank, or near a bank chest/NPC.

Sk8r_Dan_Man took a look back on the year within the OSRS Guild Council. When Group Ironman was released in October 2021, FerrousQuest started their Journey. Members being Four Guild Council Members joined by Defend. Ir0n_Dan_Man, Ferrous Fran, GIM Defend, GIM Verac (Slayona), GIM Torag (Doobz007). As for other OSRS Council members, it is noted that Skeezer is playing GIM with friends not in the clan. Also noted is Sugam, Prinessi, and Choto have a group together.

Sk8r_Dan_Man took a look back at the Clan Advent Calendar 2021. On Day 21, Francine1225 and Dan hosted a Taboo event where Miss Alaska, Santa, UptheIrons05, and Nate all participated and donated to charity water. Francine and Dan then matched the donations. In total the event raised $30. Both Dan and Fran are excited to host the event again with more people over voice chat in discord. Potentially this can raise gold pieces in game for the OSRS Clan Bank that has been in the past only received generous donations.

Lastly, as a group congratulated Toxic Rival for being the newest member of the OSRS Guild Council. After meeting him in person at the meetup in Toledo, Ohio, we decided he is a great addition to the council. Other than the QPC, He is also a holder of the Music Cape, and soon to be Achievement. Only two other clan members have achieved a Achievement and Quest Cape in OSRS, PistoleroTSJ and nmLz

Right before ending the meeting, Earth announced Choto 3000 was finally being banned from the Clan. This was a joke, of course, and he swiftly added that while Choto wasn't gonna banned, he was being promoted to the Clan Council.