Featured Article (History)
June 2019
This page was so awesome, it had to be featured on the main page! 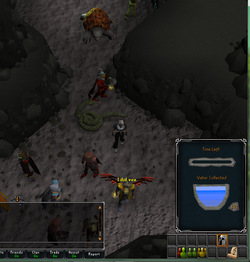 Between January 9th, 2011 and July, 2014, the Questing Clan of RuneScape hosted irregular but popular events centered around the RuneScape "distraction and diversion" (D&D) minigame, "Tears of Guthix".

The "Tears of Guthix" D&D was a short reflex-based clicking game in which the player tried to collect as many blue "tears" in a bowl as possible. Blue "tears" would give the player additional points, whereas green "tears" would take them away. The spots where tears were gathered would randomly swap between blue, green, and none, forcing the player to pay close attention in order to maximize their score. The score the player received would ultimately determine their prize, which came in the form of free ingame experience for their lowest skill. The more points you got, the more experience you earned. This was balanced by the limitation that players could only play the game once every seven days.

The "Tears of Guthix" D&D had always been a popular activity among the players of RuneScape because it was a quick and easy distraction from the monotony of gameplay that still allowed them to earn experience, and often for skills that they didn't typically spend much time on. On January 9th, 2011, Ragulu hosted the first ever organized Tears of Guthix event, organized through a forum thread on clanquest.org. While not originally planned in the original post, Ragulu ended up recording the number of points everyone who attended the event earned, and ranked them from most to least. This set the precedent going forward that would eventually turn the event into a friendly competition.

Even from its earliest days, the event was hardly consistent. It was held for three straight weeks after its inception, and then the next didn't occur until a month later. Then another two weeks passed before the next. And three after that, and so on and so forth. The event occurred plenty of times, for sure, but it was always per availability, and usually required someone willing to organize it every week. The activity did start to pick up, though, throughout April and into May and June. That June is when the event evolved, though, into more of a friendly competition. 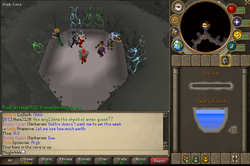 On June 20, 2011, Anamona (who had become one of the most consistent hosts over the months) abandoned Ragulu's original forum thread and started a new one, the "New and Improved" Tears of Guthix event. The time was changed, it was officially set to be held on the Clan homeworld, and rewards were implemented. The rewards were never particularly groundbreaking, there was a price limit of 100,000 gold for the winner, 75,000 for the runner-up, and 50,000 for third place. Because of the relatively low price limit, the rewards were often silly or useless outside of their resell value. 100,000 gold worth of buckets or cabbage were not unheard of as rewards, but it was usually up to whoever was hosting the event that particular week.

In addition to all of that, Anamona also recorded every single event that occurred up until the end of 2012, and every month tallied up everyone's score throughout that month and determined an overall winner. It was during this time that the event truly began to soar, and according to the scoreboard maintained by Anamona, only 8 weeks were missed between June, 2011 and December, 2012. This part of the contest continued into February 2013, at which point Anamona ceased updating the monthly records and went largely inactive. And so, the monthly winners portion of the event was dropped. During this time, and in the years after, many of the events most prominent hosts joined up, such as Cireon, Ytse, and Loud12100. The event became such a staple of Clan Quest that its hosts were even given their own group and color on clanquest.org, though this was ultimately short lived and removed.

Unfortunately, towards the later months of 2013, not only did participation in the event start to fall, but so did its list of people willing to host it. Cireon began to have less time to host, and Ytse and Loud 12100 both resigned from the Clan, ending their tenure as hosts. Still, even with attendance declining and weeks going by without an event, much like the early days, the event continued through the early months of 2014. A couple weeks would go without an event, followed by a few of consistent hosting. Attempts were made to increase attendance by changing the time, or by setting up a second version of the event for people in a later timezone. Unfortunately, even though things started to look like they might pick back up, the "New and Improved Tears of Guthix" thread went suddenly silent on May 25th, 2014.

For the next few weeks, Cireon continued to make attempts at hosting the event, but opted to create new threads every week rather than continue on with the "New and Improved" one. He had become the last person actively trying to host the event, and despite a surge in April/May, the attendance dropped to a point by the end of July that Cireon stopped hosting the event altogether. Althought there was no official, definitive end to the event, it was effectively over by the end of July, 2014. To this days it remains as the longest running weekly event in the Guild's, and Clan's, history, even if it was not consistent every week.