Featured Member (History)
May 2019
This person is such a noob, they had to be featured on the main page!

Francine1225, aka Fran, is mostly known to be Sk8r_Dan_Man's, aka Dan, younger sister. Dan and Fran are only 8 years apart, with a sibling wedged between them. They come from a family of 6 children. Fun Fact is that they are in alphabetical order with age. Oldest starts with an "A" and Youngest starts with an "F" such as Francine. With this, you can conclude that Dan is the 4th and one of the middle children.

Fran has always been interested in Runescape because of her big brother Dan. She has always watched over his shoulder as he slayed cows or traveled through Gielinor. She even helped him smith bars in Al Kharid. When Quick Chat came out, Dan finally trusted Fran and gave her an account of her own. At the time, Fran wasn't into questing as much as Dan, but when OSRS came out in 2013, they did all the questing together and never apart. When reading for an NPC, Dan would take on the male roles and spoke the way he thought they would. The same thing goes with Female NPCs, Fran read for them in the way she thought they would sound like. When an NPC thanked one of us, we would insert the other name. "Oh Thank You Sk8r_Dan_Man (and Francine1225, you are such a great duo!) Please accept this reward." 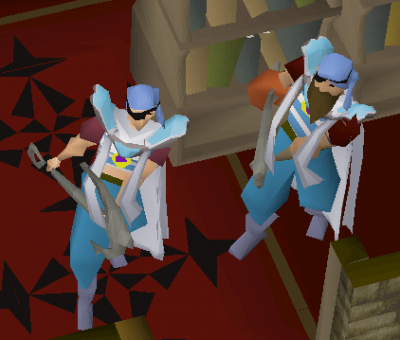 Dan and Fran traveled throughout Gelinor to complete quests together. They did this while wearing their pirate costumes and hauling around their Anchors. Finally, they received their Quest Cape together in OSRS on October 22, 2015. Francine completed this milestone while being combat level 85. As a requirement to start the quest Dream Mentor, it is the lowest combat level to be able to receive the cape. Now, in OSRS, more and more quests such as Monkey Madness II and Dragon Slayer II have been in their way to be able to wear their capes again. Jan. 26, 2019 marks the finish of Making Friends with My Arm for both Francine and Dan. Dan then went on to defeat Galvek in the final battle of DS2. Francine took her time because she wanted to be prepared. However, she died multiple times and paid the 100k multiple times to receive her stuff back, which made her spend about 2M+ to defeat Galvek. On Feb. 17, 2019, Francine finally defeated Galvek herself and continues to wear her well-earned quest point cape alongside her brother Sk8r Dan Man. Once the new quests Song of the Elves and Fremennik Exiles were released, Fran and Dan began questing together again. On Dec. 30, 2019, Dan was able to equip the cape after defeating the Jormungand. Fran then had one boss standing in her way, The Fragment of Siren. On Jan. 6, 2020, Francine was able to equip the Quest Cape after finishing the first-ever quest storyline! June 4, 2020, a new quest was released, Sins of the Father. Dan and Fran then spent 5 hours on the quest that day, again, reading for the NPCs in different accents. While Dan went ahead and finished the boss fight soon after, Fran waited until September 16th to finally complete the quest herself. Again, able to wear the fashion-scape of the prestigious Quest Cape.

Francine1225 completed her first road to 99 on March 31, 2020 at Falador Park at 4:42 pm EST. She then walked her way to Draynor Village to grab herself an untrimmed Farming cape from Martin. Those who joined Francine in the celebration in-game were as follows: Sk8r_Dan_Man, Prinessi, Sarsaparilla, and PistoleroTSJ.

Francine1225 completed her second road to 99 after she safely stored her untrimmed in Zulrah free death storage. On October 26, 2020, at 4:02 pm EST in the cooking guild bank 99 cooking was achieved. She was joined by Sk8r_Dan_Man, Ragulu, ToxicRival, and Tarpon Man. Soon after she got her cape and headed to her house in Yanille where everyone joined around her table for cake and some chat.

Francine1225 participated in the Twisted League, released on November 14, 2019, and was restricted to the Korend and Kabos Lowlands. She went to receive 7,110 points, 1,718 total level, and 58.8M experience. She chose five relics over time which included: Endless Endurance, Unnatural Selection, Eye of Artisan, Treasure Seeker, and Xeric's Wisdom. For the Rewards, she received the Twisted Horns and now has and imbued Twisted Slayer Helm. She also received trophies up to Adamant, which signified she was among the 20% of league players with at least 5,270 points.

Francine1225 plans to participate again in the Trailblazer league set to Release on October 28, 2020.

In March of 2018, Fran decided to try the complicated and daunting task of becoming an ironwoman. Starting as F2P, Fran began skilling and was tempted to pick up other player's "junk" because it was "treasure" to her. The first skill she began training was fishing and cooking at the barbarian village. Then went to woodcutting and firemaking at Draynor Village. Fran then began mining copper, tin, and iron south of Varrock. Fran's biggest struggle was watching the run energy drain so quickly. She then bought a bond and began agility. She also took the time thieving in Ardougne to get plenty of cakes for 300 birthday parties, but don't tell anyone, the baker already doesn't like her. She then began fletching iron arrows like it was no one's business. When her membership shorted out, she used those cakes to start training combat. Throughout all this training, you can count on Fran completing quests. That is the most important part! She finished all the Free quests while F2P. Now she needs to continue her membership to be able to complete more member quests.