Featured Member (History)
March 2018
This person is such a noob, they had to be featured on the main page!

Sirapyro is a long time member of Clan Quest who serves on its High Council as of May 4th, 2017. He joined the clan through its RuneScape guild on July 22nd, 2012 and has been a consistently active contributor to it since early to mid 2013. The name "Sirapyro" is derived from two different sources, "Sira" and "pyro"(as if those pieces weren't already obvious). The latter, "pyro", comes out of his affection for fire in a fictional environment(i.e. the Avatar or Pokemon franchises), while the name "Sira" is derived from his original RuneScape username "Siradam157". He quickly became sick of his chosen account name, but grew fond of his given nickname "Sira". The "Sirapyro" name was born on the very day RuneScape released its update allowing users to change their display name, and it is a name he has used across all platforms ever since.

Some of the things Sirapyro is known for are his movies, a hobby that has since become his career. For some time he created Machinima videos within RuneScape, though these largely predated his time in Clan Quest. To this day he continues to edit and write new content, hoping to return to his Machinima ideas while also applying his skills to further benefit the clan. Sirapyro is also infamous, for better or worse, for being the clans "archivist", as he has consistently maintained accurate membership rosters and, more recently, an extensive account of the clans history. This has led to the recurring joke that "Nothing gets past Sira".

Sirapyro was originally introduced to RuneScape by a friend in September 2005, but after playing it for little more than a few days he stepped away for a few minutes, only to be logged out by the games then-90 second autolog feature. Young and ignorant, he took this to mean that he had been killed(by the cows he was fighting, no less), and promptly never opened the game again.

Returning to the Game

At least, he never returned for the next year and a half. In March 2007 he was reminded of the game by a group of friends and decided to pick it back up, making a new account in the process. Thus the "Siradam157" account was born. At this point he mostly played with his neighbor, who had originally gotten him into the game, his brother, and a few of the friends who had gotten him back into it. His early days of playing were largely boring and noobish, and had key updates such as the Grand Exchange not been released, he likely would have left once more. During this time he and his friend briefly made an attempt at forming a clan, but general inactivity among the group and a lack of anyone truly caring made these efforts nearly impossible, and so for the most part he played on his own, enjoying the spontaneity of content such as Castle Wars, house parties, or other more community-focused areas of the game.

In the November of 2007, Sira began to contribute to the official RuneScape stories forum, after having been aware of it for some time. The stories he wrote were really, really bad additions to the "Noob Story" genre, which often followed noobish or idiotic RuneScape characters on their adventures, and were almost entirely plagued by poor grammar, bad spelling, and even worse storytelling. Nevertheless, this was one of Sirapyro's first real experiences with being creative in a group environment, and despite the quality of the content it allowed him to meet several new friends that he still keeps in contact with nearly a decade later. Sira worked on this "Noob Story" and its sequels for two years(to the day), finally ending it in the November of 2009, around the same time Clan Quest was being formed.

In the summer of 2009 Sirapyro became aware of, and promptly joined, an unofficial Stories forum clan/friends chat known as "The Word", which sought to bring together the writing community from the forums ingame. This was Sirapyro's first clan, of any sort, and it is a group he remains a part of to this day. More importantly, he met several friends here who would go on to be long lasting friends of his, as well as fellow clanmates. It was here that he met Pacrat4, who was ultimately responsible for him later joining Clan Quest. This is also where he met Xanthangum, another clanmember who has been around for some time.

When the Clan Camp was released in 2011 the members of The Word came together to form a true clan, with Sirapyro serving as one of its founding members. Unfortunately the foundations of the clan proved to be its most active period of time, as its membership quickly fell off the face of the game, moved on to other clans, or outright neglected clan duties such as capping at the citadel in an attempt to upgrade it. It very quickly became apparent their their group was not big enough to warrant a formal clan, and so they stuck to their friends chat that they had used for so many years prior, which still functions to this day.

It was during this period that Sirapyro made his first major accomplishments in the game. After years of teasing from his higher leveled friends he finally attained his first skillcape, firemaking. He then pursued, and obtained, his Quest Cape not long after, which would go on to serve as a staple of his ingame persona for years to come.

Since 2008 Sirapyro had been aware of the concept of Machinima, especially RuneScape Machinima. Videos like those from Kakrida, Excl, and the RSMV community inspired him to partake in the activities himself, and in January 2009 he followed through on these plans and created his own YouTube channel, on which he posted almost exclusively RuneScape Machinima content. He did not produce many videos on it, compared to other content creators at the time, and in terms of popularity he never really took off. He did, however, begin collaborating with several major members of the video community right at the end of the "Golden Age" of RuneScape videomaking, before most of them left to focus on Let's Play content in games such as Minecraft. Sirapyro was one of the few to stick with it, and in 2015 he posted the final part to the series he had been working on for several years, something few RuneScape videomakers can say they accomplished.

In early 2012 Sirapyro was invited to "The Green Brotherhood", a clan run by a videomaker friend of his that sought to bring together various video-involved players to serve as ingame actors or voice actors. Unfortunately Sirapyro never really meshed with this community, and eventually left it in July, 2012. Later, in 2013, Sirapyro was invited to the official, hidden, "Video Club" forum on the RSOF where he contributed with several other remaining videomakers for a period of time, before he was removed due to the lead mods desire to promote consistent vlog/let's play style content, over more sporadic scripted videos. There was salt.

In the November of 2011, Sira's longtime friend Pacrat4 began talking to him about a new clan she was attempting to gain access too, telling him about the recruitment process and sponsorships she was excited to have acquired. She tried to convince him to join with her, as it was a questing-based clan and the two had always shared a close bond over quests. Sira, unfortunately, chose to stick with his current clan, The Word, not having much interest in going through her clans rigorous recruitment process. This mildly upset her when Sira went on to join the Green Brotherhood only a couple months later, but when Sira finally realized that he wanted nothing to do with that clan, he finally reached out to Pacrat and asked her about her clan.

Sira began guesting in Clan Quest in early July, 2012, only to be automatically admitted to the clan later that month due to the clans leadership closing recruitment. Rather than block out all of the current guests, though, they invited all of them in, and so Sira slipped through the recruitment process. Unfortunately, despite seeking out admittance he was extremely quiet in the clan, and didn't partake in any of its events or activities. This suddenly changed in the March of 2013 after a massive falling out with his primary group of friends from the game, causing him to increase his activity in the clan. It took time but he eventually patched things up with the other group, but by that point he had grown closer to Clan Quest than he ever thought he would, and was now there to stay. 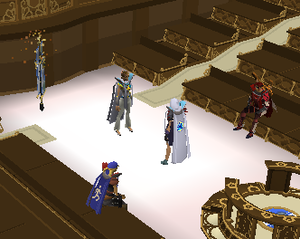 For the first few months Sira mostly spent his time socializing and partaking in small Dungeoneering events with the clan, but in September, 2013 he volunteered to take on a leadership position in the interclan alliance "Fellowship of Clans", which had been founded by then-Head of Low Council Ytse. Sira effectively ran the entire program until the end of the year, when a lack of interesting from all parties ultimately led to its demise. This did, however, result in Sira's promotion to Low Council at the beginning of that October. He quickly became an active contributor in the Low Council, irritatingly so for some, and after the 2014 recruitment overhaul he began keeping accurate records of the clans membership, which he maintains to this day.

On March 31st, 2015 Sirapyro was elected to be the clans Head of Low Council, a position he would actively hold for more than two full years; the longest anyone has ever held the position. There were a few moments where he had considered resigning, but general unrest, chaos, or shakeups in the clan at the given times caused him to reconsider. He only left the role when, on May 4th, 2017, he was offered a promotion to the High Council. Since his promotion Sirapyro has since taken up a leading position in the clans content development department, as he now contributes to the Questaholic magazine and is in charge of organizing and writing out a detailed presentation of the clans entire history.

Throughout the years, Sira gradually continued to progress through RuneScape. He had achieved his Quest Cape relatively early on, but was infamously slow at leveling up the rest of his skills. However, in late March, 2017, Sira surprised literally everyone when he actually managed to achieve the prestigious Max Cape. Following this achievement his activity in the game itself diminished, as he takes a break following it.