UptheIrons05 is a long-standing member of Clan Quest, having first appeared as a guest, sometime before April 2011. The exact date is now lost to the sands of time. He officially joined the clan on the 2nd of June 2011, thanks to sponsorship by Sir MacSimus.

UptheIrons05 joined RuneScape on the 27th of June 2005, in an I.T class at primary school. Clan Quest Fun Fact: the 27th of January 2005 was also the release date of 'Recruitment Drive'. Little is known about his formative years on the game, other than that his upgrade to P2P started sometime before the Easter 2006 event. This membership has been without pause since then, and he is very happy about his grandfathered prices.

From 2005 to 2009, UptheIrons05 played RuneScape almost exclusively on the shared computer at home, making progress very slow. It was partially because of this time limitation on gameplay that led to his heavy focus on quests. Unfortunately in mid-2009, the home computer stopped being able to run RuneScape, and so began the first great disappearance.

It was not until early-to-mid-2010, after receiving his first laptop, that UptheIrons05 resumed his playing career. After a failed attempt to start his own clan (2 members), he searched the forums for a suitable one to join. It was whilst looking through the forums that he found a young but established Clan Quest and immediately joined as a guest. For unknown reasons that would continue to shake the clan to it's core for over a decade, he was accepted into the fold.

On the 1st of October 2021, UptheIrons05 officially became the rival of Choto 3000 (the bronzed), by customising his appearance to full iron.

On the 12th of December 2021, UptheIrons05 hosted his first ever clan event, a mere 10.5 years after joining. As a part of Advent Calendar 2021, the aim of the quiz was to have fun and raise money for charity. The first pub quiz at the Purple Hood Inn featured 4 rounds of 10 questions each. The highlight of the quiz was the surprise bonus question which asked the participants to identify the skilling pet that Choto 3000 failed to destroy in another advent event. UptheIrons05 is happy to note that, out of annoyance, Choto abstained from answering the question which cost him 2 valuable points.

Forgot to record the information about this. Oh well, Choto still didn't win... 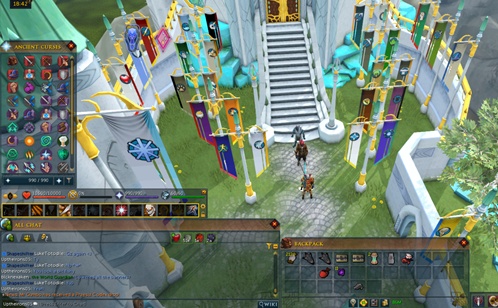 Special thanks to LukeTotodile and Blcknexaken for celebrating my entrance to the Max Guild!