This guide, also known as "Tyco elf's non-stop research of even crazier smarter ways of engaging combat", is not to introduce the combat system for the beginner, but rather remind and refine the knowledge of the already experienced players in order to strengthen their combat potentials and help them to achieve even greater heights. This guide is the result of my observations and shall therefore seen as advice rather than scientific facts. 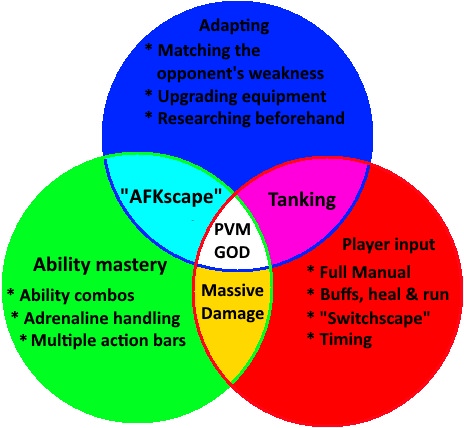 A typical scenario is all 5 members entering a room filled with enemies. 3 ranger skeletons, one forgotten mage and a Seeker. Not very hard, right? The warrior rushes in and gets targeted by the forgotten mage, whereof he retaliates. The mage number 1 in the team realises the warrior is having a hard fight and joins in to support him. Mage number 2 gets targeted by the 3 ranger skeletons, whereof he returns fire in order to quickly eliminate the threat. The first ranger sees the Seeker and knows he's the hardest nut in this room. Opening fire, he goes solo on this one. The last ranger looks at the first ranger and follows his example.

During the combat the second mage of the team dies, not able to handle the 3 skeletons by himself. The warrior, supported by the first mage, finally clears the threat and sees the Seeker in action. He jumps in and aids the rangers. Meanwhile, the first ranger gets targeted by the 3 skeletons. Returning fire, he struggles while the others focus on the seeker. On his last breath, he retreats out of the room and teleports back to the base for healing. The seeker, now finally defeated, leaves the room as the 3 skeletons now targets the mage, ranger and warrior. A one-on-one battle breaks out, where the warrior dies due to his wounds of the two previous battles. The ranger however manages to defeat two now weakened skeletons and join the mage on killing the final one. Mission accomplished!

I have seen this happen. Don't let it happen to you.


Be aware of your combat style as well as all around you.

Abilities are what gives EoC a deeper meaning, allowing everything from straightforward attacks to advanced tactics. Since every player have their own taste of abilities, weapons, armor and support items, no player fights the same. This chapter will look into ability sequences that can be performed to achieve greater results. But as always, adjust your combat to your opponent and/or your own playing style as there isn't one style that's the best for everything and anything.

During combat, adrenaline is gained and then used for Threshold and/or Ultimate abilities, the first requiring 50% spending 15% and the second requiring 100% spending 100%. Since adrenaline often is the limitation of how often more powerful abilities can be used, players have to learn early what abilities to spend their precious adrenaline on.
A general rule is that if you always have 100% adrenaline available or never can perform 2 Threshold attacks in a row, your handling of adrenaline needs to be improved. Note that this rule can be ignored if your enemy has special mechanics that require timing and usage of adrenaline-required abilities.

We will look into the handling of Basic, Threshold and Ultimate abilities later.

Action bar is the place where abilities are placed so they can respond to keybinds of the users choice. Before going to the next chapter about how to build an action bar, lets take a look into the capabilities of the action bar.

Action bars can contain the following:

During combat, we can equip a shield and block the incoming attack from a boss monster, before switching back to regular loadout. This has been used during Telos-bossing to minimize mouse-clicking. We can quick-activate prayer protection against the mighty Jad. We can drop an entire inventory of fish with the push of a button. We can fill a bar with emotes for roleplaying and RSvids. The possibilities are endless. The way you want to use the action bar is up to you, but never forget the possibilities. They won't disappear anytime soon.

In this chapter, we will focus on building an action bar for combat, bringing up points to think about and how to involve the user when handling it. The chapter can be more directed towards Revolution-users, but shall give pointers to Full Manual-users as well. As mentioned before, always adapt after your enemy and your own playing style as there is no style that's considered the best.

Requirement (1) is probably what we all are going for and shall therefore not be explained. But why include requirement (2)? For both Full-Manual and Revolution users, this requirement (if fulfilled) will reduce the chance of getting in a position where the user/system have all abilities on cooldown, creating pauses and therefore less DPS. Additionally for Revolution-users, this requirement is highly helpful in case of disconnections and/or emergency bathroom breaks where the system continues to run the abilities in the fixed order, going on for a long period of time before stopping.

More or less requirements can be put depending on enemy and playing style, but this is what I consider should be the requirements for every action bar for combat.

With requirements (1) and (2) in focus, let us split the action bar in 3 parts. Of the 14 slots in an action bar, we shall let (1) have the first 5 slots (1-5), (2) gets the following 4 (6-9) and the remaining 5 (10-14) will be reserved for Threshold/Ultimate abilities. We will for convenience hereafter refer Threshold/Ultimate abilities as (3). We will also for convenience imagine other slots for food, prayer and other user-convenient stuff being available in a secondary action bar so we can focus on a combat-only action bar.

While I said that we have fulfilled requirements (1), this is only partly true as we have fulfilled them concerning basic abilities only.
If we look at the damage we are doing, it would look something like the timeline below:

Looking at the picture above, we see that during the majority of time low damage (LD) is performed due to the high damage (HD) abilities being on cooldown, making the fulfillment of (1) doubtful. To fully fulfill (1), we have to involve the Threshold and Ultimate abilities and thus the user. Using them, we can replace the LD abilities with very high damage (VHD) abilities. Good thing is that the VHD abilities will still contribute towards the cooldown of HD abilities. Adding them to our combat, we get a timeline looking roughly like this:

Now it looks much better. Having LD abilities replaced with VHD abilities, our average damage has strongly increased along with the user now being part of the action bar. Using VHD abilities should therefore be reserved for when HD abilities are on cooldown.

Now we have one final detail before we have finished our first action bar. Remember requirement (2)?

>2. The action bar is to de designed in a way that supports its continuation for as long as possible.

Looking at the two pictures from above from before and after we involved the user, we now see that the strain on (2) has lessened after the user got involved. That means we can actually release slot 9 from the service of (2)!
Now, what to do with slot 9 is up to you. You can put it with the HD abilities of (1), you can add a VHD ability (3) or you can let it stay with (2). You can also put prayer, food or another ability that you would like to include. Your action bar, your choice.

Congratulations on making an action bar, I hope you enjoy it.

As the user becomes more familiar with combat and levels, the number of slots suddenly feels restricting as they gain more abilities and other things to put in their action bar (for full list see chapter Action Bar). Therefore at some point, the user should consider using 2 action bars, doubling the space available and therefore the possibilities in (and outside) combat. This may seem complex at first sight, but the gains in usage will prove to be valuable.
Unlike the previous chapters, this chapter is based on personal setup and experience since the maximum of action bars I have used simultaneously is 2 and that more research/feedback is needed to write it on a more scientific level.

The primary action bar is the bar that's meant for combat, the one bar that the combat-system will handle in Revolution. It's recommended that this bar has all the offensive abilities that's going to be executed during combat, just like the recommendations given at Chapter 6: Building an action bar.
The secondary action bar is unlike the primary bar focused on survival, having as little as possible connection with the chosen style at the primary bar. Non-offensive abilities, food and prayer are examples. A great secondary bar will not change no matter how the primary bar looks.

This will not only let us keep things organised between offensive and defensive actions, but also helps us avoid the biggest problem with multiple action bars: Interfering. If the primary and secondary action bar refers to the same object/action, then that defeats the purpose of why we got a second action bar in the first place. Also, as mentioned, if we cycle between primary bars for different combat-styles, there in minimal changes to the secondary bar if no offensive abilities are involved. We can see such an example below:

Another problem the user might stumble upon is the keybinds. When we double the amount of slots, we naturally try to put another 14 keybinds and thus making the usage of the keyboard more complex. However, that isn't always necessary. Just by having the option within mouse-range without opening extra window is a great help. Therefore, make a short list of the buttons of your keyboard and assign the easiest accessible ones to the actions you perform most. Sounds logical, right? Same is to uncommon buttons, that are assigned to uncommon actions. I will give an example below:

Keybinds "1, 2, 3, 4, 5, 6, 7, 8, 9, 0" (most frequently used): Assigned for Threshold/Ultimate abilities.
Motivation: Since Revolution handles the basic abilities for me, I need to focus on handling of adrenaline and very high damage abilities.

Keybinds "B, N, M" (commonly used): Assigned for prayer.
Motivation: These buttons are harder to reach fast, but during to prayer-switching not being that common, no better keybinds need to be assigned for these.

Keybinds "E, R, T, Y, U, I, O, P" (uncommonly used): Assigned for basic abilities.
Motivation: Revolution handles these abilities for me. However, should I see a situation arise that Revolution can't handle or inputs for higher damage, I can step in and use these not-so-comfortable keybinds.

Please note that the example above is only (that's right!) an example. Every player has his/her own preferences. Shift-keybinds and keybinds on mouse are two examples of expanding the number of keybinds you can have. In the end, every player has to find what suits them best.

When battling against tougher foes, a team becomes necessary and in a team, teamwork is the key to success. Therefore, different members in the team are given different roles to keep the battle more organized and strategic. We will go through some of the roles in this chapter.

I have thought a lot about whatever include this chapter or not. In the end I decided to at least include the existence of these techniques with a reminder that these are considered as bugs and/or glitches and therefore considered as rulebreaking activity if used, permanent ban at worst case. Feel free to be inspired in finding new techniques, but always check that it's not breaking any of the basic and fundamental laws of combat. No technique is worth getting banned for.