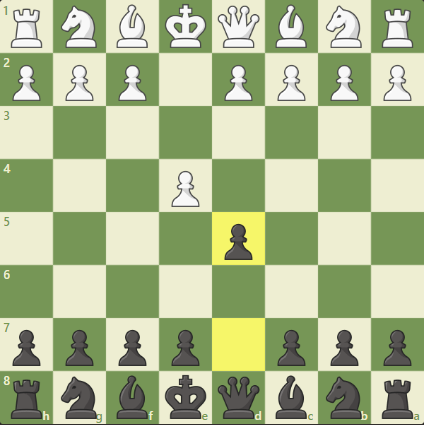 Most commonly, white will call your bluff and take the pawn. This is probably the 'right' way for white to play the position, and so you need to be prepared for it. In these positions, a Scandinavian player is often relying on the fact that they have more experience in such positions as their opponent. 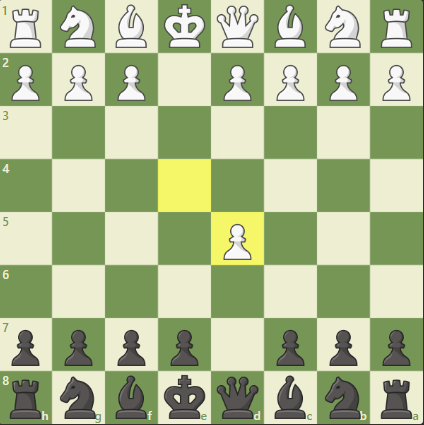 From this position, there are a few possible ways for black to play. The move Nf6 brings the game to Portuguese Gambit-like positions, and the move c6 is a move that's known as the Kloosterboer Gambit. The Kloosterboer Gambit is theoretically a bad gambit to play, but it might result in some fun positions, so you can feel free to check it out. The Portuguese Gambit-like positions after Nf6 are more theoretically sound, but they are too much for the scope of this guide. We will focus on the typical response to exd5, which is the move Qxd5. After you've moved your queen to retake the pawn on d5, white will most often attack your queen by developing their knight to c3. This forces you to move your queen. I advise you to move the queen straight over to the a5 square, although there are also people who advocate for moving your queen straight back to d8, or possibly only retreating your queen to d6. 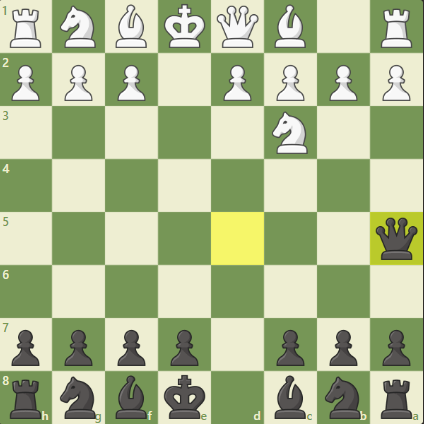 With the queen on a5, white will usually spend time playing d3 and Bd2. The bishop on d2 almost sees your queen on a5, the only problem is that their own knight blocks the bishop's vision. When you see your opponent go for this sort of plan, it is often smart to play the move c6, so that you can always retreat your queen to the c7 square. The most important thing to watch out for in these positions is the safety of your queen. Otherwise, just develop your pieces quickly, put your center pawn on e5 if your opponent allows it (or e6 otherwise) and have fun with it. White will often castle king-side in these positions, and I've had the most fun here by castling queen-side myself and launching a devastating king-side pawn storm against my opponent. Your queen is a very manoeuvrable piece, so it will be able to join a king-side attack quickly, even if you did move it to a5 at the start.

Sometimes, particularly at the beginner level, white will see that their pawn on d4 is under attack, and instead of taking your pawn, they will just push their pawn forward. It should be noted that this is not a very great move, and in this section, I will give you some ideas on how to utilize the position to take advantage. 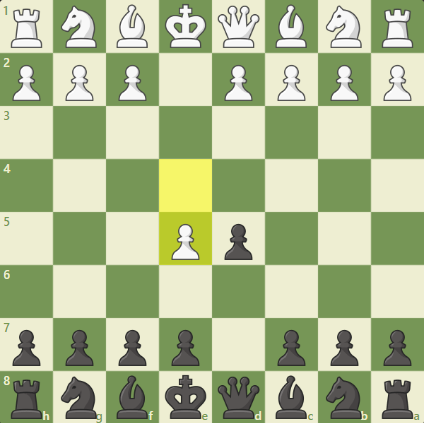 The critical response is to move your bishop to f5. Typically, white will respond with d4, and this will allow you to move your pawn to d6. This set-up resembles the French defense, but it has one important and major advantage: your light-squared bishop is out and about, rather than a little stuck on its home square as is common in French positions. After this, white will usually develop their knights. An important break to keep in mind in these positions is the move c5, which attacks white's pawn on d4 while being protected by your dark-squared bishop. White has a possible bishop check on b5, but it is typically fine to block this by playing knight to d7. If white does not play this bishop check, then you can move your knight to c6 and enjoy a nice position. Your other knight obviously cannot go to f6, so it will have to be developed via e7 or h6. 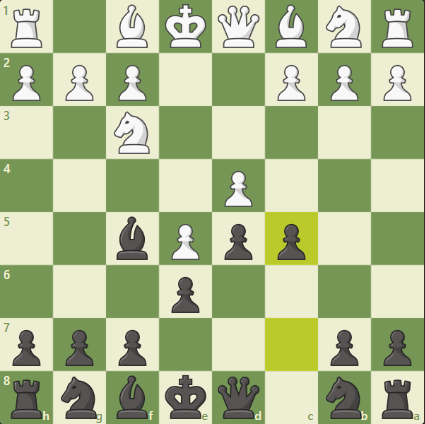 In these positions, you do have to be careful of white's queen-side knight. Because of white's pawn on e5, this knight will often try to jump to the d6 square, from which it controls a lot of squares on your side of the board.

A prepared opponent might play 2. d4, which is the Blackmar-Diemer Gambit. As with most gambits, white's idea is to have black waste their time taking a free pawn, and get quick piece development in return. 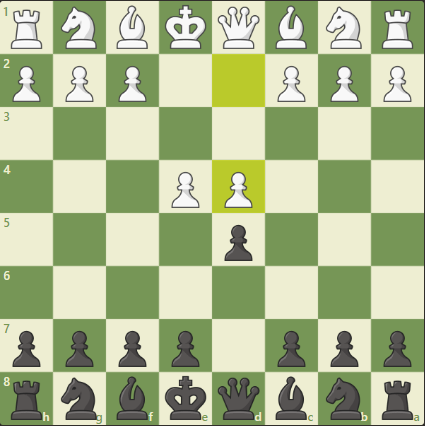 The typical way white plays this gambit is shown in the gif below. Chess engines give an advantage to black in the resulting position, however this does require very accurate play. White can quickly develop more pieces and launch a devastating attack on black's king if black isn't careful enough. Oftentimes, you'll want to develop your light-squared bishop to f5, put pawns on c6 and e6 and move your second knight to d7. Such a set-up would defend against all of white's trappy lines and results in a nice position for black (although slightly limited in terms of space).

An opponent who has watched YouTube videos on chess traps might play the Tennison Gambit, which is the move 2. Nf3. 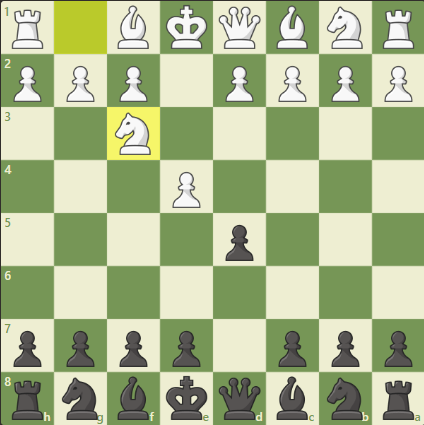 This gambit, if not handled properly, can lead to black losing their queen (see the gif below). The best response is to take the pawn on e4, and then defending it with the bishop rather than the knight. Having said that, if you're really afraid of messing up and losing your queen, the move Nc6 is always a smart move for black to play, as this covers the queen's home square of d8. The moves that black plays in the gif below are all fine, up until the point black tries to kick out white's knight with the move h6. If black had played Nc6 instead, then they would've gotten out of the gambit with a really nice position.

Of course, and definitely at the lower end of the rating ladder, white can play just about anything they please on the second move; the moves presented above are just the moves that I have experienced to be the most common responses. You might see someone play 2. Nc3, which is a bit of a weird move as you can answer this immediately by pushing your pawn to d4 to attack the knight. White will have to respond accurately in order to not lose the knight. After playing d4, you can consider playing e5 to semi-lock the center and give yourself a nice space advantage. Develop your pieces, castle your king, try not to blunder anything and your position looks good.

It's not possible to cover every possible response here, so it's up to you to play around with analysis boards or play actual games in order to find out what works for you. Most of all, it's important to have fun. In my experience, the Scandinavian Defense provides you with games that are often super dynamic. If you're more into positional, slow games, then this might not be the opening for you.