The Croesus front is the third front of the Elder God Wars Dungeon, released on September 27, 2021. It is RuneScape's first official skilling boss. The recommended group size for the boss is 8, although it is very much possible to do the boss with 4 well-prepared people. In this guide, I will assume you know the basics of the Croesus fight; if you don't, there are already a few beginner guides available on YouTube (e.g. by Protoxx and Maikeru). Now, let's get into how to 4-man Croesus.

In my mind, there is only one unlock that is absolutely essential for all players to have in a 4-man Croesus encounter: the Bladed Dive ability. This is essential because 4-manning Croesus requires you to move around the arena a fair bit more than you would in an 8-man encounter, and having Bladed Dive enables you to cross the north-south lanes (mushroom fields) much faster and much easier. Also, it's just very beneficial for your mobility, so you can get to the middle faster in clutch situations. Of course, you will always want to bring the Mobile perk in some form, whether that be on an offhand (like enhanced Excalibur) or through the Shadow's Grace relic power. 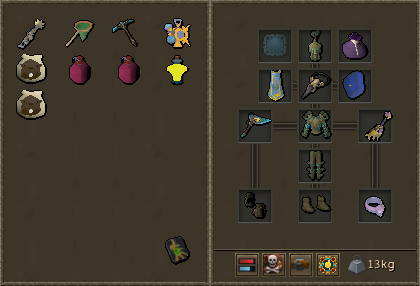 Obviously, if you're going to be 4-manning Croesus, you will need one player for each of the four skills (Hunter, Fishing, Mining, Woodcutting) involved in the Croesus fight. The preset above is a Woodcutting preset, but just sub in the correct elite skilling outfit and tool for your chosen style. It is essential to have at least 16 free inventory spots, preferably at least 18.

At the time of writing, the crystal fishing rod doesn't work inside the Croesus encounter, in the sense that it doesn't give its 5% success bonus and you also don't benefit from any perks you have on it. As such, you should really be using a rod-o-matic for Fishing.

Besides the things included in the preset, there are a few other boosts you can use:

I've mentioned relic powers multiple times throughout the guide so far, but I figured to list them separately as well. These are the most useful relic powers for the Croesus encounter:

Consecutive mechanics are 12 seconds apart, and they always go in a specific order: smoke bomb -> fairy ring -> orange blob -> smoke bomb -> stun bomb -> sticky fungus. The energy fungus will coincide with every second sticky fungus (at approximately 2:30, 5:00, 7:30, ...); this pauses the timer between mechanics, and it starts running again when the energy fungus piles are fully removed. Use the timing knowledge to deal with mechanics accordingly, i.e. walking the smoke bomb to a nice spot, activating Crystal Mask before the orange blob spawns, using Anticipate before the stun bomb lands and moving to the middle before the energy fungus spawns. This takes some practice, but the best way to improve at Croesus is to be mindful of mechanics and learn to deal with them properly.

Important mechanics to look out for are the stun bombs at about 2:15 and 4:50. Once they land, make your way to the middle immediately and be ready to get on the energy fungus piles as they spawn. They are essential for your contribution.

If you're fast enough at gathering, you can take the fairy rings that spawn at 1:36. They will take you to a random corner in the arena, so this may spare you some travelling time. I have to say, though, I always opt not to do this (as I just end up having to wait a full minute at the end of the kill if I do). Instead, I do something different: I gather my 10 rot at my starting corner (different than described above) and only start travelling either just before or just after the first mid at 2:30. You should prioritise travelling; if you wait with travelling until very late in the kill, then you'll have another player waiting on your resources, and they aren't going to appreciate that. In general, you should aim to finish gathering and start travelling before first mid.

This method is known as 2-1-rot. This is because you travel 2 corners, then travel 1 corner, then rot. This is by far the most popular method for 4-man Croesus.

Particles on the core

What can go wrong?