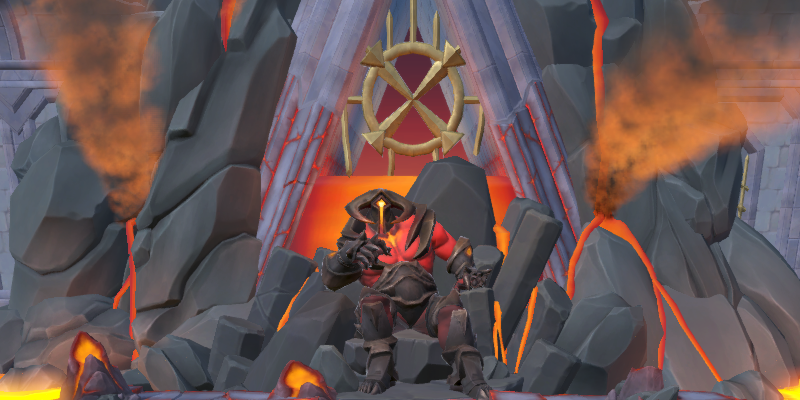 The TzekHaar front is the fourth and final (?) front of the Elder God Wars Dungeon, released on October 25, 2021. As with all TzHaar-like combat encounters we've faced so far, the main attraction is a wave-based combat encounter with the TzKal-Zuk boss fight at the end. This encounter is colloquially called the Inferno, after its OSRS counterpart with the same boss. In this guide, I'll take you through the important things you should know before heading into the fight.

The intent for this guide is to help players complete their flawless normal mode runs. Hard mode is far above my paygrade, so if you're looking for assistance there, I'm afraid this guide won't be of any help. 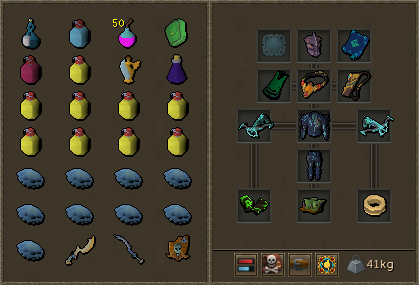 The above preset is what I used to get flawless normal mode runs. Let's see what's important. 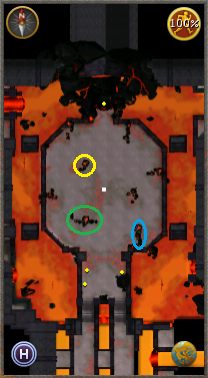 The Inferno consists of exactly 18 waves. About half of these waves aren't very problematic; they just consist of regular monsters being dropped in the Inferno, which you'll have to dispose of before you move on to the next wave. Make sure to use your protection prayers and use Devotion when you can. The main issue with these waves is that you'll want to minimise your food usage, as you'll need your food during the more difficult waves. The green-circled rock in the minimap above is a very useful rock, colloquially dubbed the safety rock, as strategically placing yourself around this rock will mean certain minions will not be able to reach you.

The important checkpoints in the fight are the challenge waves: wave 5, wave 10 and wave 15. The wave before each challenge (wave 4, wave 9, wave 14) also has a special mechanic that needs to be dealt with in its own way. The wave after each challenge (wave 6, wave 11, wave 16) contain an increasing number of TzekHaar-Jads. Wave 17 is a fight against TzekHaar-Aken, which you might remember from the Fight Kiln, and wave 18 is the final boss fight against TzKal-Zuk himself.

For a flawless normal mode run, you have to successfully complete all challenge waves. It's possible to fail the challenge waves; this will not end your run, you'll just take a fair amount of damage. Getting an igneous stone to upgrade your capes only requires getting through the Inferno without dying, so failing a challenge is okay (as long as you survive). The only reward for a truly flawless run is access to hard mode.

The first part of the Inferno, waves 1-5, is sort-of the melee phase of the Inferno. Most of the monsters that spawn are melee monsters, although you will face a few mages and rangers. Pray accordingly.

Walk up to Zuk and press your special action button. All of the regular monsters will now be instakilled, and you'll be able to damage Zuk for a short period of time. In this time, you'll want to try to do 50k damage to the boss. Place a Death's Swiftness, drink an adrenaline potion and go to town. If you fail to reach 50k damage on Zuk, you'll have to repeat this wave until your total damage on Zuk is 50k. After that, you'll go to the first challenge wave: wave 5.

You'll be placed inside a small circle, and five Volatile TzekHaar-Hur will spawn. They all have 8k HP, and the objective is to kill them all before the bars above their heads have filled up. This is essentially just a DPS race, so this is the time to bust out all of your thresholds and special attacks. If you don't kill them all before your time's up, they'll explode for heavy damage (and you will fail the challenge). If you're struggling to kill all five, sip a Powerburst of vitality before the timer runs out to halve the damage from the explosion.

If you kill all five or survive the explosion, you will move on to wave 6.

Wave 6 is like a regular wave, except it will contain one TzekHaar-Jad. This Jad will spawn in the south, so I've found the best place to stand at the start of the wave is north of the yellow-circled rock (see minimap above). When Jad spawns, it should be trapped in the southern part of the arena, so kill the regular monsters first before moving onto Jad. Jad doesn't have any special mechanics, just make sure to flick your protection prayers correctly and you'll get through.

The second part of the Inferno, waves 6-10, is sort-of the ranged phase of the Inferno. Most of the monsters that spawn are rangers, although you will face a few mages and warriors. Pray accordingly.

This section also introduces the TzekHaar-Tok-Xil, the big Rangers. These monsters should be prioritized, partly because they hit hard, but also because their accuracy and damage increases the longer they stand in one place, which makes them very dangerous.

After dealing the 50k damage to Zuk, you'll be placed inside a small circle again. One Unbreakable TzekHaar-Ket will spawn with 20k HP. This monster is quite annoying to deal with, because he only takes damage from hits 3000 or above. As such, it's important to have a Death's Swiftness up and use high-damaging abilities like Snapshot, Shadow Tendrils, the Dark Bow special attack and Greater Ricochet. If you don't get him down in time, he'll explode for high damage. As with the first challenge, if you're not able to kill him in time, a sip of Powerburst of vitality will halve the damage from this explosion, making it more survivable.

Wave 11 is like a regular wave, except it will contain two TzekHaar-Jad. These Jads will spawn in the northwest and northeast corner, so I stand east to northeast of the blue-circled rock. This should trap both of the Jads exactly where they spawn. Deal with the minions, kill the northeastern Jad, then kill the northwestern Jad. Make sure to flick your protection players correctly and you'll be fine.

The third part of the Inferno, waves 11-15, is sort-of the magic phase of the Inferno. Most of the monsters that spawn are mages, although you will face a few rangers and warriors. Pray accordingly.

This section introduces the TzekHaar-Ket-Zek, large four-legged creatures that attack with magic. In addition to hitting hard, their attacks apply the same Geothermal Burn debuff as TzKal-Zuk himself (described below), which hits for high magic damage. The Freedom ability clears this bleed, and the damage is halted by killing a Ket-Zek (though it starts again when re-applied).

You'll be up against three Igneous TzekHaar-Mej (or igneous mage) alongside some regular magic monsters. It's important to focus on the igneous mages. You'll need to stand inside the igneous mage's shield before you can properly damage it, so be prepared to move a lot. Once you take down all three igneous mages, you'll see your special action button appear. The "50k damage on Zuk"-thing is repeated here.

After dealing the 50k damage to Zuk, you'll be placed inside a small circle again. Three Fatal TzekHaar-Yt-HurKot will spawn, and they'll launch a combined total of four attacks against you. I believe they always start and end with a typeless hit, with one Magic hit and one Ranged hit in between, although the order of the Magic and Ranged hits is different between kills. In any case, the easy way to deal with this challenge is to use Barricade. This requires 100% adrenaline and a shield, so you'll need to plan accordingly.

If you can't get 100% adrenaline for Barricade, a more intensive way to deal with this challenge is as follows:

Wave 17 is the TzekHaar-Aken fight. TzekHaar-Aken will appear either along the western or the eastern edge of the arena. While he's up, deal as much damage to him as you can: use Death's Swiftness and your thresholds and go to town. Occassionally, a lava bomb will shoot up from the lava surrounding TzekHaar-Aken. To dodge this bomb, move two squares in any direction. It's important to dodge these bombs, because they'll hit for a fair amount of damage and reduce your adrenaline gain for a short while.

After some amount of time, TzekHaar-Aken will go under again. You can build adrenaline on the tentacles while making sure to dodge the lava bombs. When you get the message that TzekHaar-Aken is bombing you and lava bombs shoot up from the geysers inside the arena, just Surge away from your current location and you'll avoid all of the bombs. TzekHaar-Aken appears again after attempting to bomb you twice. Rinse and repeat until you kill TzekHaar-Aken. It's important to note that he might (re)appear on either side of the arena, so keep your eyes open.

When waiting for the head to re-appear, don't forget to clear the tentacles that spawn around the edges of the arena, particularly the Magic tentacles. They're useful for building adrenaline, but the magic-using tentacles specifically absorb damage dealt to TzekHaar-Aken, based on however many are still alive, up to a maximum of 1100 damage; it shouldn't be critical to the fight, but it can slow your kills tremendously if you have too many alive when the head comes up.

Your final hurdle is TzKal-Zuk himself. He will mainly attack you with Melee attacks, although he will hit you with the occassional Magic attack if you're outside Melee distance. He'll move himself into Melee distance, though, so you don't have to worry about the Magic attacks too much. The hardest part about the Zuk fights are his mechanics, though, so allow me to cover those. His mechanics will always occur in the same order, which is the same order as below.

Zuk's last mechanic, Igneous Rain, deserves some more explanation. He shouts Flames consume you! or Burn!, teleports to the center of the arena and becomes immune to attacks. He'll also drag you to a random location in the arena. Make sure to use Anticipate when he shouts and teleports, otherwise the drag will stun you. If you didn't Anticipate in time, you can also use Freedom to get rid of the stun. Zuk will light up the arena with lava rain; you have a few seconds to move to the section of the arena that is currently unaffected by the rain. This safe section will always be about one third of a turn clockwise from your current location, so use Surge and Bladed Dive to get there as quickly as possible. The Protect/Deflect Magic prayers reduce the damage taken from standing in the fire, so can be helpful if you're struggling to reach the safe zones in time.

If you're not comfortable with Bladed Dive switching, or if you just want to preserve the inventory space for healing items, an alternate way to deal with the Igneous Rain mechanic is to move close to Zuk, and then step into the narrow segment of the safe zone when it appears. Because Zuk is so large, and his hitbox doesn't extend all the way to the floor, you can run "under" him, getting to the safe zone with little risk of taking damage.

After some time, the rain will disappear, and Zuk will start charging up an instakill attack. If you've killed all three of the igneous monsters, you'll be able to interrupt this instakill attack by activating the special action button. His mechanics rotation will now reset. Get the boss down to 100k HP as soon as possible. At 100k HP, the mechanics rotation will reset again, regardless of where you were in the previous rotation. As such, it could occur that you get the Geothermal Burn twice in a row; this is slightly annoying as your Freedom will be on cooldown for the second Geothermal Burn. When I notice this is going to happen to me, I save my Freedom until he applies the second Geothermal Burn. You'll have to eat a bit to tank the damage, but it's very doable.