Many members of Clan Quest will be familiar with web games; many of us in the RS and OSRS Guilds discovered RuneScape as one of the many web games in their childhood. I'm no exception there. Web games have long since been an easily accessible medium, spanning a wide variety of genres, and for me in particular, they've formed a major part of my own online history.

In this first instalment of a new series, I'll take you through a few of my favourite web games from years past, grouped under a different theme each time.

For this edition, the theme is Immersive Experiences: games that focus on creating a certain atmosphere, feeling or impression for the player.

A whole world waits for you when you turn out the lights. Our imagination works wonders when no one is watching. In our dreams lie childish figures, random shapes and half remembered memories. Ana Somnia is a generative art project that emulates how we dream, combining animation, soundscapes and code. Kim Köster’s Illustrations merge in manifold permutations, seemingly the same, yet different each time. Switch off your lights to enter Ana’s dreamworld.

Strange how the first game to be featured here is a stretch to even call a game. It's an art piece, hosted on the web, with the player's input only minimal — though meaningful.

Though confined to your screen, there's an extent to which Ana Somnia extends out into the "real world". You'll see a prompt at the beginning asking for use of your webcam, and if you let it, it'll then respond to the level of light in your room. Get up, switch off the lights, and by the time you're sitting back down, little Ana will be fast asleep. 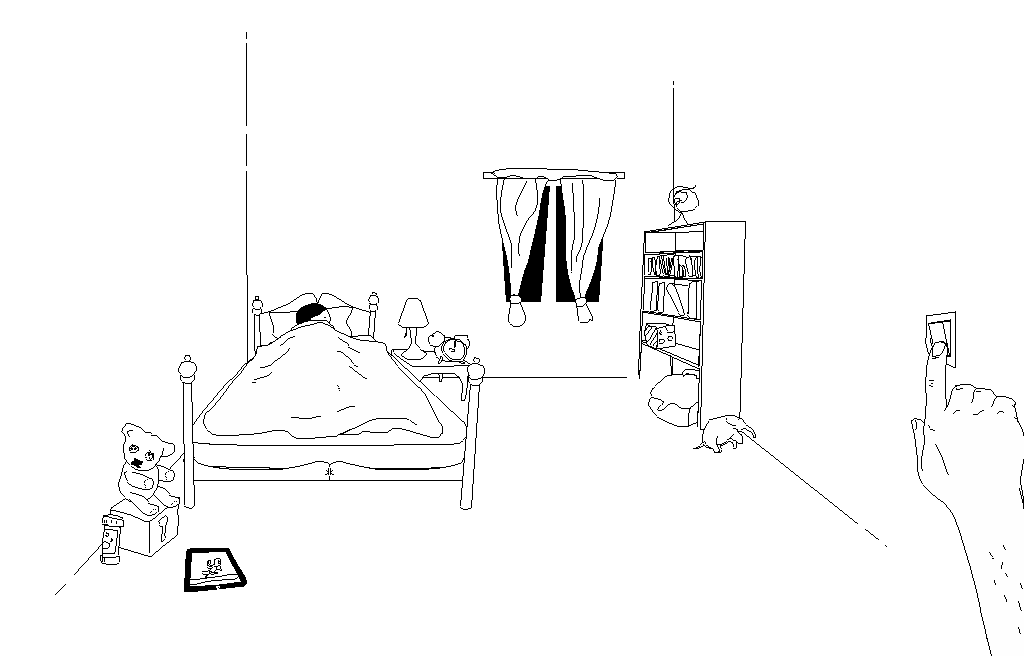 If you don't have a webcam to use, or don't want to use yours, then the game offers an alternative: flick a switch in Ana's room for the same effect. But that loses half the joy of it. It feels magical when flicking a switch in reality can launch a whole dream world on your screen.

However you get there, Ana's dreamscape is incredible. It's stark white-on-black, aliased line art one pixel wide, and yet the minimalistic art style forms itself into such bizarre, ever-expanding shapes. There's imagery in there that feels like it took formative root in me — I think some of it managed to sneak into my dreams around the time I discovered this. A headless, legless body climbing a ladder into the void. Faces swallowing each other whole, forever. There's dozens of discrete elements, almost impossible to describe. All of it grows out of the rest, always moving, never stopping — not until Ana wakes up, that is. 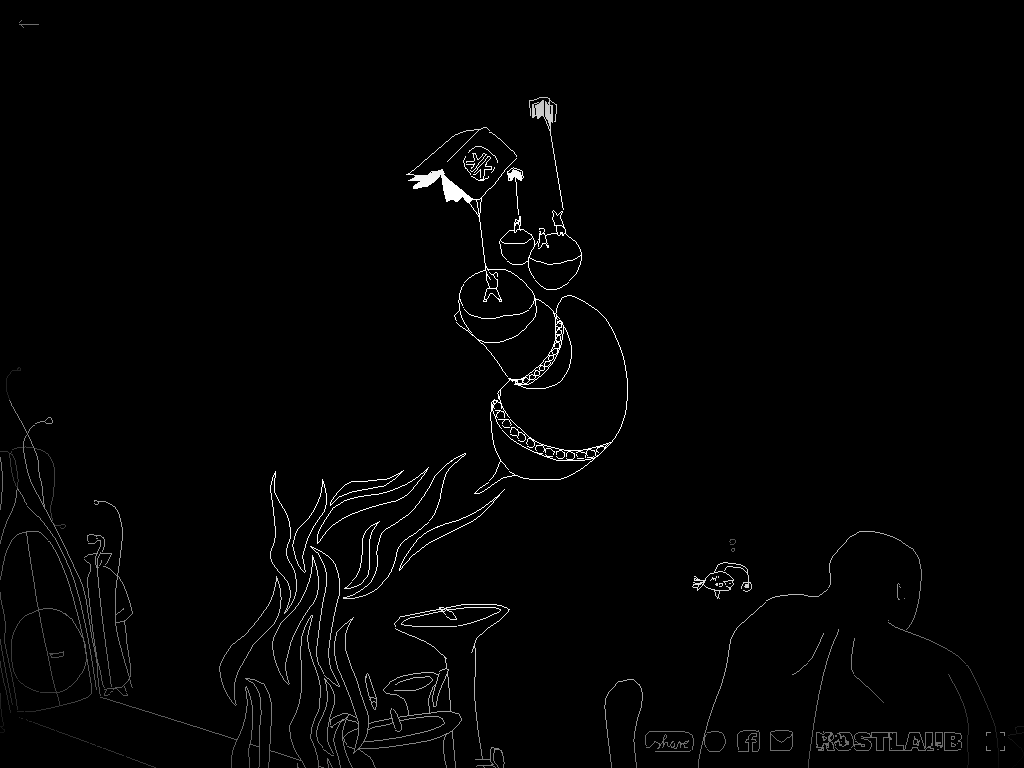 There's accompanying sound design, matched to the visuals onscreen. Personally — and though this may be heretical to say — I never paid the game's own sound much heed, and often muted it in favour of the spooky soundtrack of my choice (Led Zeppelin's No Quarter was my favourite at the time). However I've chosen to experience it, though, I've found it consistently mesmerising over the course of nearly a decade. And it'll always be there for me — as soon as I turn off the lights.

Flock Together is a personal project, with lots of hand-drawn artwork and storytelling. I wanted to make a project that was reflective of the time I was in. The game takes place on a 360 degree world, panned left to right, with four seasons pinned at each island. Originally the game was going to take place over a 360 degree arching world, but I didn't like the feel of travelling upside down.

John Cooney is a well-known web game developer — you may be aware of his classic series Achievement Unlocked, This is the Only Level, or Ball Revamped. Flock Together is one of his lesser-known games, quite unlike anything else in his back catalogue (no elephants, for one), but it's no less worthwhile for it.

It's a simple game with a simple concept: you play as a young girl hitching a ride from as many birds she can latch a rope onto, in order to fly up into the clouds. A short introduction makes it clear that you're going up there to rescue your best friend (who is a sheep). That's a sweet backstory in itself, but it's the gameplay that does the heavy lifting here: there's something uplifting about the movement of it, of being pulled progressively higher through the air by a growing flock of birds. Combine that with the wistful music looping in the background, and the rising motion becomes an emotional journey in itself. My first playthrough, alone in the dark, felt like a religious experience. 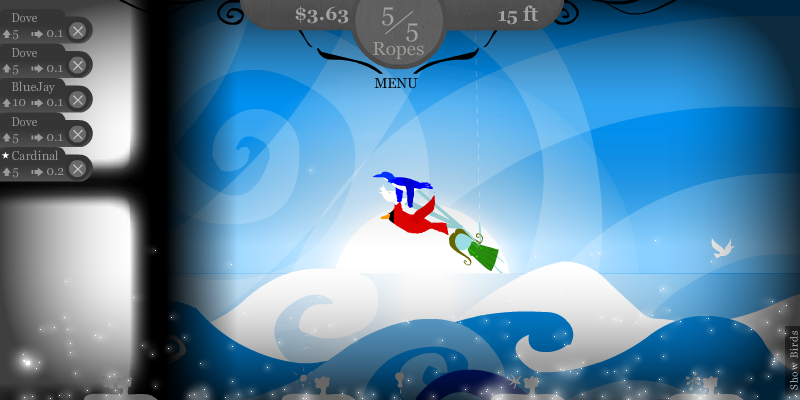 It's illustrated in bright, solid colours, childlike and imaginative, filled with curls and swirls — until it whites out once you're finally nearing the top. A fascinating artistic touch is the film reel rolling down each impassable edge of the play area. And one more thing, something I only noticed when playing it through for the showcase: click the "Show Birds" tab in the bottom right, and the map lights up with glowing markers for each individual bird as they move across the map like a field of shooting stars.

There's a core gameplay loop that defines your progression, common to a lot of games: earn currency, spend that on upgrades, make progress and earn currency faster. It feels a little out of place in this, though. You're capturing birds to... sell them, then capture better birds which you'll also probably sell. It does detract from the childlike wonder of it all, though it does recoup some of that via the shop being run by a rabbit in a hot air balloon. Thank You Very Much Mr Rabbit indeed. 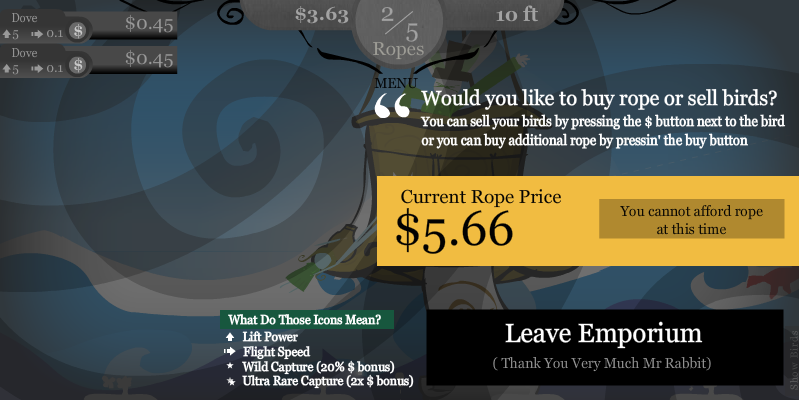 Replaying it lately, I almost ruined it for myself by being unintentionally aggressive with it — playing to win, and getting frustrated when I couldn't catch what I wanted. There's a billion other games you can play like that, and this shouldn't be one. Go gently with it — let the birds fly on if you miss them, and take the journey upwards at whatever pace you can manage. Soar through the sky and be at peace.

Scientist John Pilgrim and his team have accidentally created a pathogen that is killing all living cells on Earth (bummer, right?).

In the last 6 remaining in-game days on Earth, the player must make choices about how to spend his last moments. Will he spend time with his family, work on a cure or do something else entirely?

You have One Chance. Remember that.

First things first: this game is bleak. I'm not gonna pull any punches there, cos the game doesn't, either. 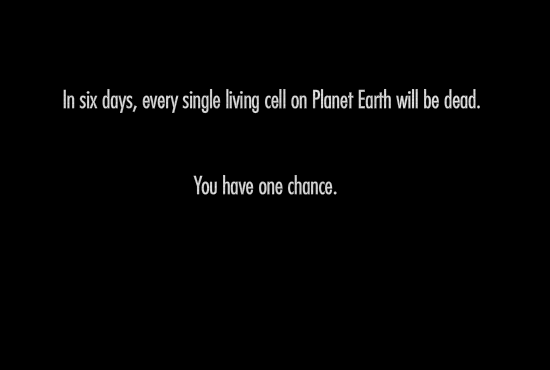 It's a doomsday scenario, and no matter how you play it, people will die in some pretty nasty ways. You have some limited amount of choice in the matter, though. You can do what you can to save people... or at least make their deaths a little less awful.

For many games, having branching choices like this makes them ripe for replayability. There is none here, and that's the point of it. You have one playthrough, one chance, and whatever you do is what you're stuck with whenever you come back to the game. There is no "play again". Your end screen is all you're getting. Web games make for a transient, disposable medium by their very nature — not even requiring the commitment of a download and installation — but this bypasses that, giving you permanent consequences that will remain. You're made to think about every action you make.

So, uh... I've played this three times now. Once on my laptop, once on my desktop, and once again on desktop when writing up this review, thanks to Flashpoint Archive's choice to include a hacked replayable version. Kinda defeats the point, doesn't it? The urge to turn back time and undo your mistakes is a hard one to restrain... as is the completionistic urge to "get all the endings", as depressing as that may be here. I admit that on my second time round, I just wanted to do better than the first time. I left it a few months in between, though. Better to have it feel fresh than to wear it all out with repeated play.

At the very least, for the first time round (which might also be your last, or just the first on an increasingly boring completionist binge), the tone it sets is powerful. Gloomy music and an increasingly grim colour palette make for one hell of a depressing mood. You'll pass through the same locations pretty much every day, and you get to see just how much they're falling to shreds. The pacing in particular makes a huge difference: the game knows how to play its emotional beats, leading you with just the right dread to some really stark, striking imagery. Sure, the characters are nothing more than archetypes, and the plot is nonsensical with any decent grasp of biology, but if you can put that aside, I reckon this game pulls off its concept well.

HONORABLE MENTION: Things We Lost In The Flood

Not a web game (it's a "name your own price" download on itch.io), but just after my second time playing One Chance, I went hunting for games by the same dev — and that's how I found this one. Suffice to say, this one definitely fits under the "Immersive Experiences" category. It's another fairly bleak one, but post-apocalyptic this time, and with a much greater range of tone than simply "all depressing, all the time". Part of that is due to the player input it takes: you find messages in bottles, written by other players, who've been prompted to put their secrets into the game. It's "the world's dampest and least efficient chatroom", as the description goes. Paddle across the floodwater, write a message yourself — or maybe you'll find one of mine.

These games all take themselves pretty seriously, huh? That's not really representative of the wide range of web games out there, many of which are silly, fun, and/or just generally irreverent. I guess I did start on a fairly pretentious theme here. Make no mistake, though, I'm lightening things up next time round, where the theme will be Explore and Solve. See you there, and enjoy the Advent Calendar! I'll be back with a big surprise later on...

This year we are raising money for charity: water. You can donate directly through our campaign page. If you want to show your appreciation to our streamers, make sure you donate during their streams, as they'll be keeping an eye on incoming donations and reading out donation messages! We also have goals and incentives to hit during the month of December, so keep an eye out for those as well.

charity: water is a nonprofit organization bringing clean and safe drinking water to people in developing countries. 100% of donations made to charity: water go straight to the sustainable water projects. The work is incredibly important as nearly 1 in 10 people worldwide still do not have access to reliable sources of clean water. Access to clean water improves health, increases access to food, grows local economies, and helps kids spend more time in school. Since 2016, charity: water has funded almost 79,136 water projects (as of October 2021) across 29 countries, serving more than 13.2 million people. We at Clan Quest are proud to help raise money for this amazing cause, and if you like what we're doing with this Advent Calendar, please consider contributing today. Every donation helps.