Happy Advent, Questadillas! It’s been a while since I’ve done one of these, but ‘tis the season and I’ve brought another Christmas movie for you to enjoy! This is a bit of an obscure one, I think; it’s certainly not topping many charts in my neck of the woods, but it’s a film I watched and enjoyed as a child, so I’m going to share it with you: it’s Santa Claus: The Movie! 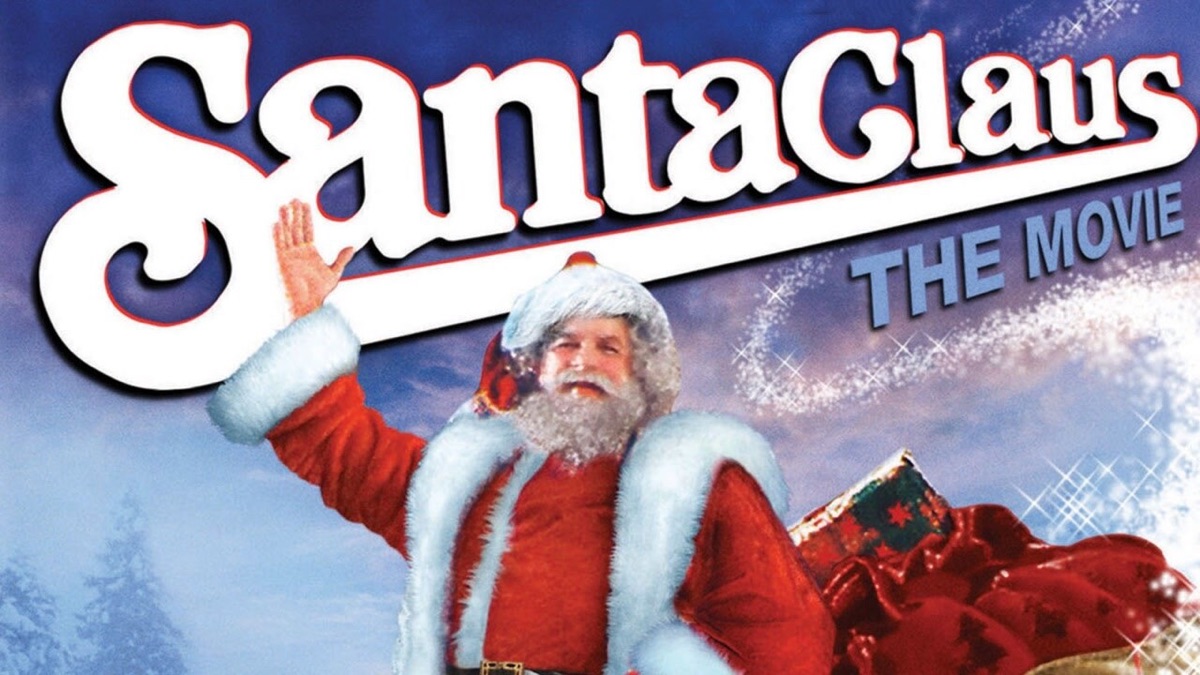 Let's get the disclaimer out of the way now: this is emphatically not The Santa Clause, the 1994 Tim Allen vehicle (though, fun fact: in 1994 Allen simultaneously had the highest-grossing film, the most-watched television show, and the New York Times #1 bestselling book; the 90s were a strange time). This one came out in 1985, and stars David Huddleston (who IMDB informs me is best-known for playing the titular Big Lebowski) as the Man in Red. Actually "stars" is maybe the wrong word, since Huddleston gets third billing despite playing the title character, but he does seem to be the main character, if not the protagonist. I think. This movie is structurally...peculiar, but I'm getting ahead of myself a little bit.

Huddleston is indeed the star of the first part of the film, which depicts the origins of both Santa and pretty much every piece of ephemera associated with him. In this continuity, rather than being a Turkish saint or a British alcohol sprite, Santa is an ordinary man named Claus living in 14th-entury Scandiwegia, who is beloved by the local children because of his habit of distributing handmade toys every Christmas. When he pushes too hard one year, stranding himself, his wife Anya (Judy Cornwell), and his two reindeer Donner and Blitzen in a blizzard, they're rescued by a group of toymaking elves who live in a hidden village at the North Pole, and who have apparently been expecting them in anticipation of a prophecy being fulfilled. Claus is given the epithet "Santa", he and Anya are given eternal life, and the newly-coronated tyrant king of the elves is tasked with distributing elf-made toys to all the children of the world, once a year, for the rest of time.

This is a perfectly serviceable movie premise on its own, but it's a bit light on tension, so about forty-five minutes in something resembling a plot kicks in at last: after six hundred years of working one night a year, Santa is falling asleep at the dinner table and is prompted by his wife to hire an assistant from among the elves. It comes down to two candidates: Puffy (Anthony O'Donnell), a rather dull traditionalist, and Patch (Dudley Moore), who's bursting at the seams with ideas for automation and mechanization. Rather than get off his duff and make a decision, Santa decides to put it to a contest: whoever can make the most toys in some unspecified period gets the job. Patch immediately sets about building an automated toy-assembling machine: wooden pieces go in, assembled and painted toys come out. He wins the contest handily, but everything turns sour when Christmas rolls around and Patch's toys literally fall apart. Humiliated, he resigns his post and flees the North Pole in disgrace. He falls in with unscrupulous toy magnate B.Z. (John Lithgow), and resolves to prove his worth to Santa by creating a revolutionary new toy to bring joy to all the children of the world. What could go wrong? Those of you who attended the Advent announcement back in November will remember me saying (or, rather, remember Cireon saying on my behalf) that I hadn't seen this movie in a very long time, and I couldn't remember if it would be a movie I'd recommend or not. Having now watched it to write this review, I can state with confidence:

Santa Claus: The Movie is a very inconsistent film. The script...has problems, most notably what seems like an inability to decide what to focus on. Nearly half the film is what I'd classify as prologue, introducing Santa Claus and explaining where he came from, how he came to be at the North Pole, where the "Naughty and Nice" list came from, and so on. This is a wildly unnecessary use of time; I think even in the Before Times of 1985 we had a handle on who Santa Claus is. The consequence is that the main plot, Patch trying to prove himself in America, has to be crammed into forty-five minutes, which leads to some interesting writing gymnastics. The first meeting between Patch and B.Z., for instance, is possibly the most efficiently-written five minutes of film I've ever watched. The scene reads like the script writer's first draft, with the two characters literally reciting their motivations and (less literally, though barely) characterizations at each other.

Actually, let me pull on that thread a bit. Because the script is full of little things like this, which suggest either that it could have used another draft, or that there's another full hour sitting in an editing bay somewhere. Probably the most jarring is that Patch's motivations are all over the map. He starts out as a forward-thinking elf, who wants to innovate and improve on the centuries-old processes of the North Pole; great, that's a fine character. When his efforts to prove himself backfire and he joins up with B.Z., he says that his goal is to prove his worth to Santa, which...I don't understand why you needed to leave the North Pole to do that, but okay. When his first invention takes off he tells B.Z. that he's done what he wanted to do and is going back to the North Pole, and then ten minutes later says the same thing again when he learns that Santa missed him. So, Patch, question: did you think Santa hated you? Did you feel creatively stifled in the North Pole? Or did you feel like you needed to prove that you could be successful independently of Santa's influence? Any of these are fine motivations, but the movies tells us all three at different times, which leaves the character feeling rather thin.

Another one that jumped out at me is that, despite being clearly coded as a villain, B.Z. doesn't actually do anything villainous until fifteen minutes before the end, when he's informed that Patch's new invention violently explodes when exposed to heat (like, say, a home radiator), and makes plans to take the money, flee to South America, and leave Patch holding the bag. Funnily enough it seems like the writer realised the same problem, and solved it by making B.Z.'s introductory scene so over-the-top as to be cartoonish. We meet him as he's been hauled in front of a Senate subcommittee to account for the abysmal safety record of his toys. Okay, so did he use lead paint? Did some kids choke on one of his blocks? No, he stuffed teddy bears with rusty nails and broken glass. That's such an absurd way to introduce a character that it brings me around to one of the reasons why I actually still enjoyed this film SEGUES YEAH!

Wait, I already did that joke. Oh well, you're not paying me for this. (Sidenote, please donate to our charity partner).

What was I saying? Oh right, the things I liked about this movie. The biggest one is a few of the performances, particularly John Lithgow. B.Z. is such a ridiculous pastiche of an industrialist (he literally refers to himself as a "titan of industry" in one scene, which takes place in a completely empty factory), and Lithgow plays him perfectly as, essentially, a living cartoon character. It's hard to get too bogged down in all the ways the story doesn't make sense when your main villain doesn't so much chew scenery as he runs it through a woodchipper. David Huddleston is the other standout, and is easily one of the best portrayals of Santa Claus I've ever seen, right up there with Edmund Gwenn in Miracle on 34th Street. He plays the character, in stark contrast to Lithgow's manic energy, as a very quiet and reserved figure, and he brings so much genuine warmth and heart to the role that it's almost impossible not to smile whenever he's on screen. In his review, the late Roger Ebert compares this film to 1978's Superman, which was made by the same producer, and explicitly compares Santa and Superman as heavily-mythologized supernatural heroes. With benefit of hindsight, I would add another parallel, at least between Huddleston and Reeves' takes on the characters: they're basically, fundamentally kind. Maybe this is a symptom of me getting older, but I'm getting tired of "realistic" heroes, which seems to always mean heroes who are jaded, cynical, and snarky. I want a hero who takes an interest in a kid nobody else cares about and brings him a Christmas present; not for any plot reason, not to any benefit to themselves, but just because it's kind. Huddleston's Santa more than delivers. 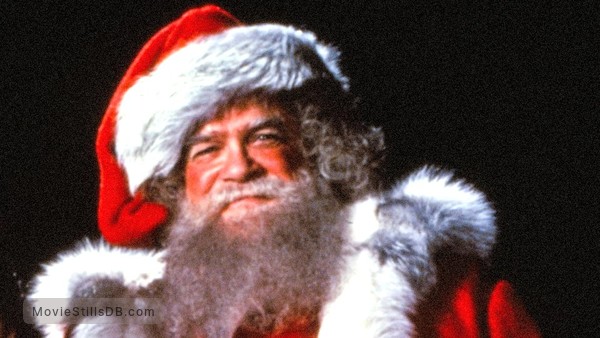 The other reason I enjoyed this movie, and this is going to be a weird thing to say, is the set design. When I was a kid I had a photobook of this film, which I read far more than I watched it, and to this day the thing that most stick in my mind is Santa's Workshop. It isn't as flashy as some more recent iterations of the North Pole (looking at you, again, The Santa Clause), but the simple wooden construction, with splashes of bright colour from the toys and the wardrobes, is full of old-world charm, starkly contrasted with B.Z.'s cold, industrial factory, and looks like it jumped out of my childhood fantasies.

Which, to be fair, it sort of did.

On balance I guess I'm recommending this movie, though I wouldn't blame you if you skipped it. The script has some holes, and there's not a whole lot of depth to the story, but it has some heart and is almost worth watching for Lithgow's manic energy alone. But it's not exactly a great movie, not likely to be many people's favourite Christmas movies (at least not if they've seen it recently), so don't feel bad if you can't look past the film's very legitimate problems.

This year we are raising money for charity: water. You can donate directly through our campaign page. If you want to show your appreciation to our streamers, make sure you donate during their streams, as they'll be keeping an eye on incoming donations and reading out donation messages! We also have goals and incentives to hit during the month of December, so keep an eye out for those as well.

charity: water is a nonprofit organization bringing clean and safe drinking water to people in developing countries. 100% of donations made to charity: water go straight to the sustainable water projects. The work is incredibly important as nearly 1 in 10 people worldwide still do not have access to reliable sources of clean water. Access to clean water improves health, increases access to food, grows local economies, and helps kids spend more time in school. Since 2016, charity: water has funded almost 79,136 water projects (as of October 2021) across 29 countries, serving more than 13.2 million people. We at Clan Quest are proud to help raise money for this amazing cause, and if you like what we're doing with this Advent Calendar, please consider contributing today. Every donation helps.