The Legend of Xurdtwos/Zogre Flesh Eaters

Happy Spring, Questapaloozas (or happy Autumn, for any of my readers from the Upside Down). It's been a hot minute, hasn't it? DXP and Yak Track aren't good for my writing productivity, and even worse when they happen back-to-back like this. But I'm finally done both, so I feel like I can take a sit down and hammer out my post for a quest I actually finished before DXP even started:

We begin by talking to Grish, an Ogre Shaman hanging out on the wrong side of his holy place. It turns out that Jiggig, the holy burial ground of the Ogres, has something of a zombie problem. What's more, the zombies are spreading a deadly disease: dance fever. 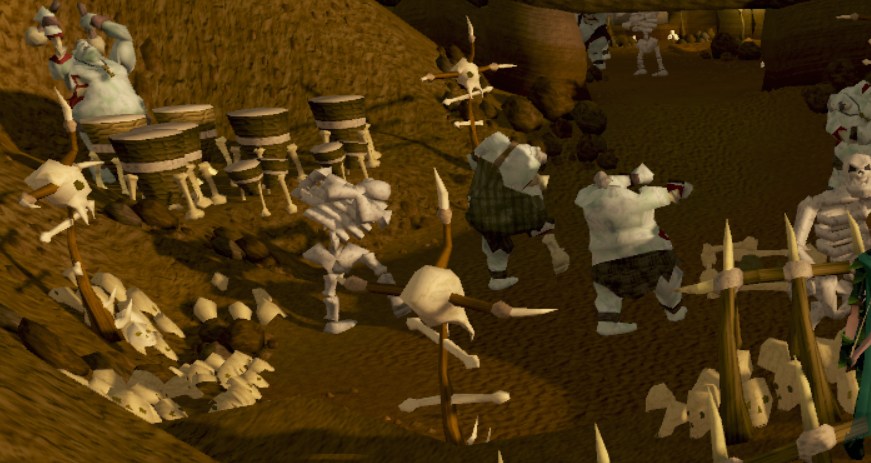 Okay, not really, although I like the humour of the zombies just rocking out. Actually the Zogre disease is the first thing in the quest I really want to talk about, because it's aged very poorly. On release, contact with the Zogres would infect you with the "disease" status ailment, which would reduce your skill levels by a random amount (similar to the God Wars dungeon weather effect). It could be partially countered with Restore potions (which restore combat stats), hence why Grish gives you two super restores after you finish talking to him, and cured completely with a potion called Relicym's Balm, which you discover the recipe for during this quest. It's an interesting mechanic, a twist on the classic poison debuff. Unfortunately it was removed completely with the Evolution of Combat, which leaves huge swathes of this quest hanging in the wind. I mean the quest still works, the hostile zombies are a reasonable enough threat, but a lot of the narrative subtext, not to mention gameplay challenge, kind of drops out of the quest without the debuff.

That aside, our driving goal is pretty clear: identify what's causing the zombie invasion, and undo it. We're directed to the caves underneath Jiggig, and while down there I pretty quickly discovered a place where the game took control of the camera and focused on a random skeleton. 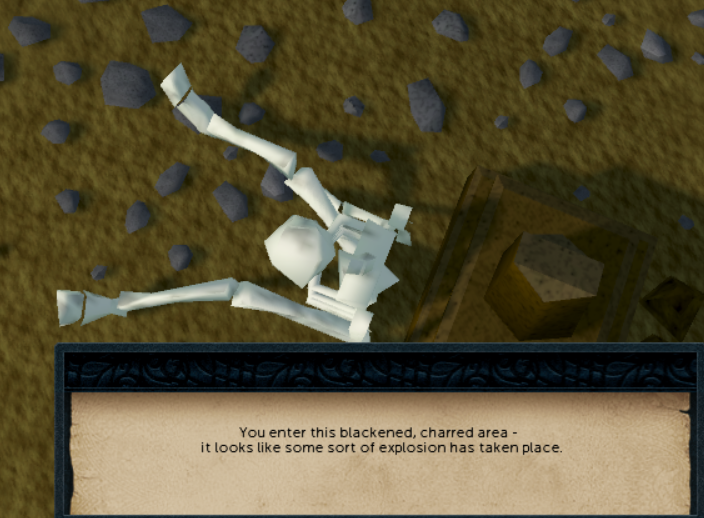 This is something I've complained about in the past, and I won't defend it here; it's quite unnecessary, especially since it's one of the few distinguishing features of the cave, but I suppose it would have been fairly hectic to be a low-level player down here with the aggressive Zogres spreading disease, so it feels less egregious than it could be. What annoys me more is the puzzle that results from searching the body, because I struggled with it hard but I don't think it's entirely my fault.

See, what happens is that searching the corpse gives you a mug with a logo on it, and searching the nearby lectern gives you a page from book of magic emblazoned with a guild symbol. The guild symbol is obviously evocative of the Wizard's Guild in nearby Yanille, and the logo on the mug is the same as on the shingle of the Yanille pub. So far so good. There's only two people in the pub I can talk to, but neither of them give me any quest dialogue. What I eventually figured out is that you need to use the mug on the bartender before he'll tell you that it belonged to a regular customer who used to hang around with someone from the Wizard's Guild. So I go over to the Guild and talk to Zavistic Rarve, but he also has no quest dialogue, so I use the page on him to learn that I'm missing something. Okay, that's good design, I go back to the Jiggig caves to scour around, and I eventually figure out to push open the lid of one of the Ogre coffins, to find a black prism inside.

The Ogre coffin, incidentally, is a subtler bit of bad design, because you need to interact with it multiple times but there's no indication that you're making progress, so it's easy to assume you're missing a component of the puzzle which you actually aren't. But moving on.

Obviously I'm meant to take the prism to Zavistic, so I take it and use it on him and...nothing. He reacts to it, but he still gives me the "you're missing something" message and doesn't progress the quest. Okay...I went back to the Jiggig caves and searched every tile, nothing; I killed Zogres looking for drops, I tried opening more coffins, all coming up empty. Finally I went to the wiki to find out what I was supposed to do, and it just says "show the items to Zavistic." At this point I'm assuming the quest has bugged, but eventually I happen to misclick and talk to Zavistic instead of using an item on him, and *that* launches me into quest-progressing dialogue. So this entire segment is poorly-designed, firstly becauze Zavistic and the Bartender have different interaction flows, and because Zavistic *himself* has two different interaction flows. It's immensely frustrating, because unless you do the quest in *exactly* the right sequence, it's easy to get the impression that there's something else you need to find, when there isn't. I'm not pleased.

But moving on, Zavistic sends us to the inn to visit Sikith Ints, a Guild member who studies necromancy, and he's just *so* obviously our villain:

Thanks, Chancellor Palpatine, I'll keep that in mind. Despite him obviously being the villain, Zavistic isn't willing to gve him up without evidence, which fair enough. I go back to search Sithik's room, and what do I find?

There's some foreshadowing for you. Anyway, this is *also* not enough to convince Zavistic (seriously? Fine), but the other thing I found in Sithik's room is a book on portraiture, and the Bartender had previously said that he could identify the person his regular was talking to. So that's a good, subtle clue, which I quite like, although the implementation of the puzzle I'm less entusiastic about. What you're supposed to do is use papyrus and charcoal (both found in Sithik's room ) to make a portrait of him, and take it to the Bartender for him to validate it. The problem is that there are two possible portraits you can make, only one of them will solve the puzzle, and which you get seems entirely random; at least, nobody seems to have been able to figure out a pattern to it. This is also bad design because, as I've said before, progression should be tied to a player's actions, not to entirely random chance.

either way, once we have both the HAM book and the signed portrait, Zavistic is prepared to believe there's something fishy going on with Sithiks. He gives us a potion to give him, which will apparently help get the truth out of him. I assumed this was a truth serum, but I was more than mildly delighted to be wrong: 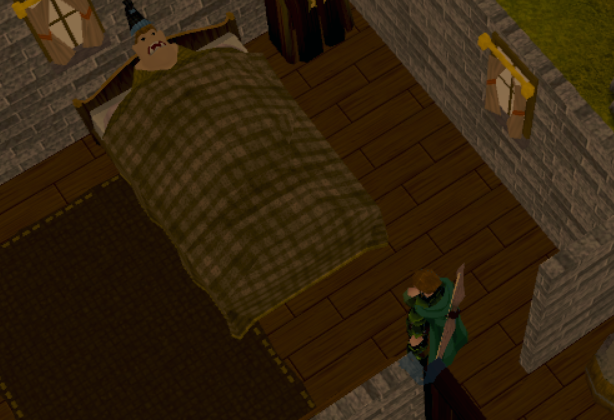 It turned him into an Ogre instead, which is brilliant. I love it. I also really liked the puzzle to get the potion to Sithik; he obviously won't take it directly, since you're going around accusing him of being a monster, so you have to slip it to him. Conveniently, there's a conspicuous cup of tea on the desk next to Sithik's bed. Nothing really draws attention to this (although Sithik reacts if you try to take it, which is a big hint), but it's very conspicuously-placed in the room. It's a logical puzzle that manages to be well-signposted without dialogue. It's a good'un.

While under the influence of Ogre, Sithik admits to his heinous act, but reveals that the curse is imposible to break; Jiggig belongs to the Zogres now, and there's nothing anyone can do about it. This is a disappointing answer, but we take it to Grish and he's understanding. The only thing he wants is their holy relic, so they can set up a new holy ritual site somewhere else. Fair enough. There's a boss fight that was pretty straightforward (again, lots of the challenge left the quest when Disease was removed), but I've got the relic, and... 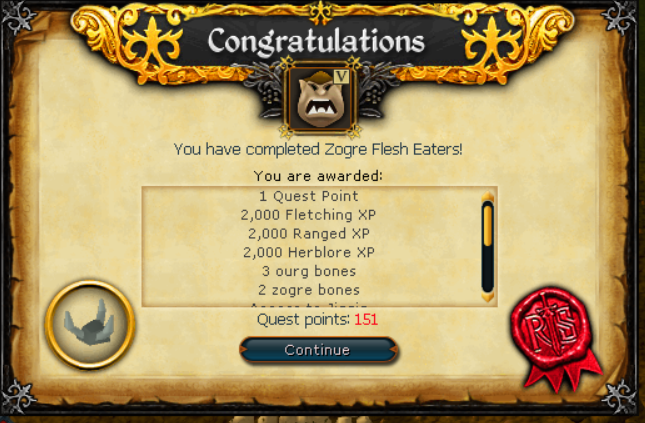 Honestly I'm surprised the quest ended there, although given the big boss fight I probably shouldn't be. I was expecting to have to do something to help set up the new ritual site, but no apparently Grish is going to take care of that without us. Except he never actually does, which leaves this quest feeling like a loose thread, more's the pity. That aside, this quest had ups and downs. There are definitely some elements I like, including some clever puzzles and some interesting narrative ideas (it's interesting to see humans and Ogres co-operating, for instance), but a lot of that was overshadowed by some very significant design flaws. Oh well.

Last thought before I go, I was reflecting that the Ogres are one of the more developed non-human cultures in Runescape, which is unexpected and very interesting. One of the things I really did like about this quest was the glimpse it gave us into a different side of that culture, the more spiritual side. It was fascinating, and I wish there was more content that developed it. Oh well, see you next time.