The Legend of Xurdtwos/Wolf Whistle

This is another rework I've actually played, I think on my main this time shortly after coming back to the game (there was red in my quest list; this could not stand!). This was a very short quest, so this is going to be a short write-up, but I have some thoughts on the rework that I'll get into a little later. The important thing for now is that the original version of this quest was a sort of mini-tutorial for the Summoning skill, and the skill could not be trained until this quest was complete.

We start by talking to Pikkupstix and, as with so many of these early-game quests, straight up asking him if he has anything for us to do. As an aside, I've always liked the running joke of the druid's names all being words or phrases (or puns on words or phrases) that end with an "-ix" sound; it's a joke that's borrowed heavily from the Asterix comics, but it's a good'un.

Pikkupstix wants us to go check up on his assistants, Scalectrix (Scalextric) and Bowloftrix (Trix cereal), who were sent on an errand and never returned. We go find Scalectrix, and find that Bowloftrix has been captured by trolls!

Well no wonder you've been gone so long. Didn't occur to you to go get help on your own, did it? Thought not.

But now that we've magically come to her rescue, Scalectrix gives us our major goal for the quest:

As I've said before, I appreciate jokes like this; the resolution to the original Wolf Whistle was to use a Spirit Wolf pouch (hence the name of the quest), so the fact that she's already tried this solution and failed is a fun nod to Runescape's history. But since the lowest-level Summoning pouch failed, obviously we need something stronger. Going back to Pikkupstix for ideas, he suggests a Giant Wolpertinger pouch, which is apparently a more powerful version of the ordinary Wolpertinger pouch we can create for ourselves at level 92 Summoning.

This is another joke I like, which also addresses the motivation problem I've discussed before in other quests. Why do we need to do this? Why can't the quest-giver take care of things themselves, or have someone else they already know do it? In this case, the answer is because Pikkupstix is dangerously, comically negligent, and his assistants are almost universally book-smart but otherwise-dumb. It's not a stupendous explanation, but being framed as comedic gives it a bit of extra leeway there. This is good writing! Realistically, the only reason we need to be the one doing these quests is because we're the player, and there's no game otherwise. There are only so many ways to write around that fact, so comedy is a good solution.

This also ties into what I've said before about the portrayal of Guthixians. I like that the followers of Guthix (at least, these followers of Guthix) are portrayed as kind of ditzy, in contrast to earlier portrayals where they could do no wrong. It's a nice bit of depth of characterization.

Now Pikkupstix tells us what we need to acquire, which is standard fetch-quest fare so far, but this is where the quest loses me a little bit:

All of these things are well-contextualized within the universe, and there's a reason Pikkupstix needs us to get them instead of going for them himself. What bugs me is that this quest is supposed to be the introduction to Summoning; the original version of the quest did this by basically being a tutorial in the skill, walking you through the process of making the most basic pouch and some ability scrolls for it. It's a good tutorial, because it shows you exactly what you need to do within the world.

There's two things I don't like about the rework:

The net result is that this quest actually has very little to do with Summoning as it exists in-game. I do think there are some interesting lore ideas here, because it opens up the possibility that there's more to Summoning than what we're exposed to (most notably, Pikkupstix refers to Summoning rituals that must be performed in groups, which would be an interesting expansion of the skill), but it still grates on me a little bit that the quest that's supposed to introduce players to Summoning has almost nothing to do with it. It vexes me.

Anyway, let's take care of the list. They're all pretty straightforward to get, so I won't go through them in detail, but getting the Wolf Bone Amulet is pretty fun. He gave it to his last assistant, Stikklebrix (Stickle Bricks), who went to cross White Wolf Mountain and never came back. 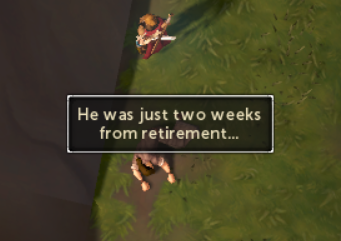 See? He's in a better place, now. Far away from Pikkupstix.

Anyway, that's basically the quest done. We bring the items back to Pikkupstix, create the pouch, and then go over to Scalectrix for the final cutscene in which we rescue Bowloftrix. Quest complete! 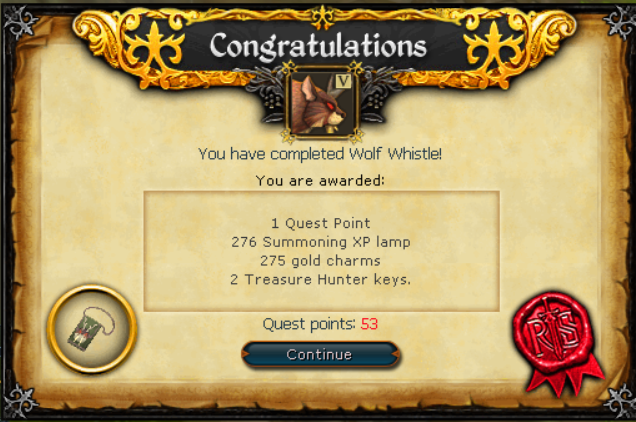 I don't have a lot more to say that I haven't said already, but I'll end with the observation that I think this quest stretched the joke about the names of druids about as far as it could possibly go. The puns were getting pretty weak by Magestix, but some of Pikkupstix's past assistants took it to the absolute breaking point. I mean, Spartatrix, really? It's a fun reference, but kind of getting away from the spirit of the naming joke, don't you think?