The Legend of Xurdtwos/Violet is Blue

Ah, back to familiar patterns. We begin the quest by encountering a lone little girl on White Wolf Mountain, which seems slightly less than safe. After pointing this out to the little girl, she disappears into a nearby portal and Twoie resolves to go after her, to make sure she's safe. So far, so Heroic.

Sidenote, but before I started the quest I decided to examine Violet, meaning this was my first experience of the quest: 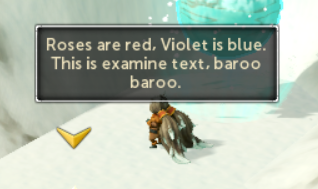 That's cute and fun; that's what I was missing from Ashdale. It's by no means necessary to the narrative, but it's a cute detail that sets expectations of tone, and also is just fun. Remember when this game used to be fun?

Moving on, we follow Violet into the portal to the Land of Snow, only to find that she's beaten us to the top of the hill and is now rolling giant snow boulders at us. The mechanics of how a tiny girl is able to hurl snow boulders larger than us, an adult person, shall go unconsidered. This is okay as puzzles go; it's just a movement puzzle, but as I've mentioned before movement is not one of Runescape's strengths, so movement puzzles grate more than somewhat. But it's over pretty quickly, and we're at the top of the hill with Violet again. Suddenly we hear a loud roar and Violet, naturally, wants to run deeper into the woods:

Foreshadowing does a rimshot

Violet runs off, and we follow her to a cute little cabin in the woods. This feels like a setup, I've read the Brothers Grimm, but before we knock at the door there's lots of little examine text jokes. I won't repeat all of them, but this one made me chuckle: 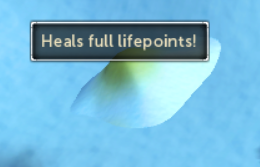 Moving on, there's some fun dialogue options at the door, most of which ultimately lead to us being invited inside by a couple of yetis. They're very friendly yetis, and offer us some of their stew:

Read the room, Betty; that's not a good thing to say to a stranger who just saw a young girl run into your house. Violet is, of course, fine, because these are her adopted parents, and we soon sort out the primary goal of the quest: get Violet to the Yeti Village. Nice simple hook.

Now we have to tell her, which introduces our first puzzle: Violet wants to pack up some things, but (because we're dealing with a child) we turn it into a game of I-Spy to make it more fun for her. There are only three places to search, each containing four items, and there are very few common first letters, so it's not a difficult puzzle; if I had a complaint it's that it drags a bit, since you need to find five items. Generally puzzles like this use a three-item limit, and I'm not really sure why exactly "three' was the number handed down by Video Game Moses, but it's a good number; it proves you can solve the puzzle without being tedious. Five isn't terrible, but it does drag a bit.

One of the five items I had to fetch for Violet, by the way, was a weapon gizmo. I couldn't resist examining it, and:

Either Trevor or Betty must have an Invention level of, like, 200 or something. Dang. With Violet all packed, we're off on our grand adventure, accompanied by Trevor. The remainder of the quest consists of five puzzles, each in a defined area.

First up, we have a path leading into some dark trees, and Violet is afraid of the dark. So we need to find something to light the way. Ever helpful, Violet has a suggestion:

No, Violet isn't channeling Shiro; she's actually referring to fireflies, which appear when you shake one of the nearby bushes. Okay, I can figure this out: shake a bush, catch a firefly, give it to Violet to hold like a makeshift flashlight. Easy-peasy, right?

Nope, I'm not that lucky. Looking for suggestions I talk to Trevor, who happens to have a glass jar that will contain fireflies. Okay, I think, I fill the jar with fireflies, and then Violet can't eat them. But no, that's not the solution either; and, annoyingly, the game isn't giving me feedback on what to do anymore.

It's about at this point I notice that some of the trees along the path are interactable, but using the jar on them doesn't do anything. Then I notice the bucket, and some maple trees closer to the fireflies, and I finally start getting feedback: I have to get syrup from the maple trees, smear it on the evergreens lining the path, and then let Violet release the fireflies from the jar so they get caught in the syrup and form makeshift streetlights.

Personally, I thought it would have been easier to just give her the jar to hold, but what do I know.

Also, as a Canadian I just can't let this go: that's not how maple syrup works. You get maple sap from the trees, and then you have to boil it down to get syrup. It's massively inefficient, too: you need like 10 litres of sap to get 1 litre of syrup. File that under "mistakes nobody cares about."

Second puzzle: we encounter some headless golems, which makes Violet sad, so we have to give them heads. Making the heads is pretty straightforward, we just interact with the pile of snow. Then follows a short animation-matching puzzle (identify the emotion Violet's chathead is expressing), and then comes the annoying part: we have to hurl the snowballs at the golem bodies. This is done by clicking on the ground, and Violet throws a snowball that lands on the spot you clicked a few second later; meanwhile, the 15 headless golems are running randomly about.

This is a frustrating sequence because it relies so heavily on randomness. It's not a puzzle, because there's nothing to solve, and it's not a minigame because there's no skill involved beyond "click as often as possible." I'm struggling to think of a way to improve the sequence beyond just not making it; having fewer than 15 golems might have helped, as would having the golems move in some sort of pattern. I dunno, I just didn't like it. And neither did my mouse.

Third puzzle: we have to cross some ice, but it's too thin. Violet roars, which knocks some snow down to strengthen the ice (...that's how ice works, right?), but she gets performance anxiety when asked to roar on cue, so we need to build some snowmen for her to roar at. It's a pretty unremarkable puzzle (find the items in the nearby boxes), but I liked the overall sequence for two moments, sadly neither of which I got screenshots of:

Fourth puzzle is an ice-pushing puzzle, reminiscent of Myths of the White Lands. Not much else to say about it than that.

Fifth puzzle is a construction puzzle: we have to build a sled, from available materials, for Violet to slide down into Yeti Village and make a grand entrance. There's not much to say about this puzzle either: there are a finite number of places to search, and the items get used up automatically. This one gave me pause, though: 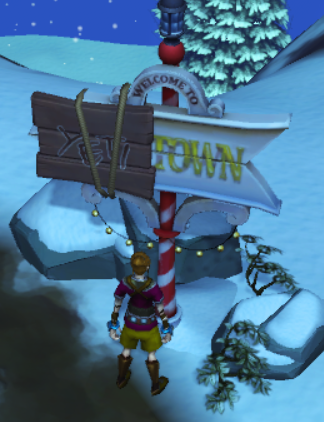 There's some interesting background storytelling going on here: what was this town before it was Yeti Town? What happened to the people who lived here before? This is one of those questions that probably wouldn't be very interesting to learn the answer to, but is a nice way to add depth to the world. Tolkien wrote about this in relation to the Lord of the Rings, that part of the appeal of the series (in his opinion, anyway) are the glimpses of a deeper history beyond the needs of the story. Little details like this help make a fictional world feel lived-in, which is always preferable to a world that feels like the scenery of a play. So that's fun.

Once the sled is built, we have to give it a name, which is a whole mess of pop culture references (I chose "Cool Runnings", because I love that movie), and then we're all over bar the shouting: Violet sleds into Yeti Town, is proclaimed to be the coolest thing on two legs, and quest complete! 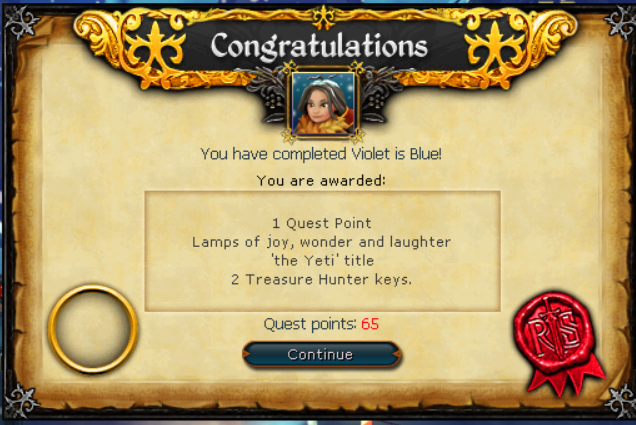 So, let's be fair: there wasn't a lot going on in this quest. I still liked it, though, for a few reasons. First, there's a lot of humour: lots of fun little pop culture references, lots of dad jokes from Trevor, lots of little humour moments interacting with Violet. Funny quests (when they're actually funny, of course) are always welcome.

But the biggest reason I liked it was that it was just sweet. It's a story about kindness, about making sure a little girl has a good time. There's some real emotion in it, both Trevor and Betty are concerned that Violet won't be accepted by the other yetis (a fear Violet shares, as revealed near the end), but you help assuage those fears and the conclusion reinforces that people can be better than we fear them to be. I mean yetis can be better. Of course I meant yetis.

It's not a perfect quest, the puzzles were a little uneven, but overall I appreciated it because of what it represented. Sometimes we don't need to be the grand saviour of All, sometimes we just need to be kind.