The Legend of Xurdtwos/The Lost Tribe

This is another quest I've been quite looking forward to. The Goblin quest series is another of Runescape's "signature" quest lines, and one of its more unusual. Tis quest series appealed to me a lot when I was younger because, much like with Guthix, it's a place where Runescape subverts player expectations. After all, Goblins have been the generic bad guys of the fantasy genre for nearly a hundred years, with an extensive folkloric reputation before that, so it was pretty strange and interesting for Runescape to establish a peaceful and friendly goblin tribe. At least, I thought so, which may or may not reflect on the limits of my pop culture knowledge. Anyway, let's dive right in to...

We begin with out usual gimmick: walking up to some random schmuck and yelling "oi, gimme a quest!" In this case the schmuck in question is Sigmund, advisor to the Duke of Lumbridge, who is concerned about a hole that recently appeared in the castle cellar.

I mean, one would hope you'd realize if an earthquake were a plausible explanation. That's not really a thing you just sleep through, unless you're California. But I shouldn't be too hard on this line, because it's doing a very important job: it's setting up that Sigmund is a xenophobic lunatic. Later dialogue will be much less subtle about establishing this, but for now it's a fun foreshadow-y hint.

Sigmund suggests that we ask around and gather evidence, which is a good idea. I must have gotten very lucky here because the first person I talked to, the Cook, told me that he saw a goblin running into the hole; while reading the wiki to fact-check this post, I learned that there were potentially five people I would need to talk to until I got that dialogue, including the Duke himself. It seems that which NPC progresses the quest is entirely random and, while I don't love randomness in game mechanics, this is a less egregious example partly because the search space is small, and partly because it fits the investigative nature of the puzzle. It maybe would have been better if it were always the third NPC I spoke to, or something, but it's not terrible.

Though imagine if the Duke of Lumbridge was the one who saw the goblin; that would kind of break the plot a bit, wouldn't it?

Anyway, now that we have an eye-witness account, it's back to the Duke who is (perhaps understandably, considering we haven't done anything he couldn't and shouldn't have done himself) still unwilling to commit to action. But Sigmund eventually convinces him to let us search for more evidence, by appealing to our reputation:

I've mentioned before that this is something I really like the game doing, so I won't spend a lot of time dissecting it, but it's still nice to point out.

With the Duke's blessing I go down to the cellar and open up the hole, where I find a brooch not far inside. Taking it back to the Duke, he suggests I take it to Reldo for examination (Sigmund, of course, sees evidence that goblins are stealing from humans and wants to go to war). Reldo himself isn't terribly helpful, but he does direct us towards a book which is an absolute lore delight. Seriously, this book is probably the longest-lasting legacy of this quest, because it established a ton of backstory on the goblin tribes that are still used and expanded on to this day. Just one example out of many, the book describes the Yurkolgokh tribe as "the flatulent", and what's one of the artefacts we can find at the Warforge digsite fifteen years later? A Yurklgok stink grenade. Another fun part: 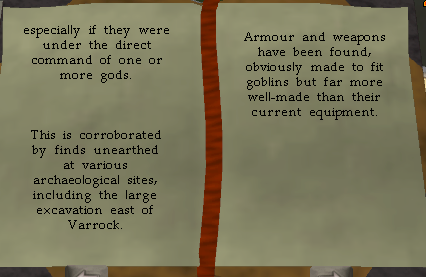 I somewhat doubt this was intended at the time, considering the fifteen year gap, but this final paragraph does perfectly foreshadow one of the big twists in the Warforge dig site, namely that the eponymous forge was operated by an Imcando dwarf, who made Imcando-grade equipment for Bandos' armies. If the connection was intended, it's an amazing bit of foreshadowing; if not, it's a truly impressive use of old lore to inform current storytelling. Either way, I love it!

I also love that the book subtly directs us to our next NPCs, the Goblin Generals. This is good signposting! The generals themselves are fairly unhelpful, as per usual, but there's a neat dialogue puzzle where we need to steer them away from their tendency to quibble over nonsense. It's not a hard puzzle, but it's narratively fun because it relies on established quirks of the characters. There's some interesting lore on the Dorgeshuun tribe, which will be expanded upon later, but the real point of that interaction is to learn the Goblin Salute and Goblin Bow emotes. Now that we have these, it's time to make contact with the Lost Tribe!

What follows is a new favourite quest puzzle for me. The route to the Dorgeshuun settlement is a maze through the caverns beneath Lumbridge, with hazards if you follow the wrong path. It's possible to brute-force, even though some mistakes will send you back to the start, but you can also observe "strange symbols" marking the path, symbols like this one: 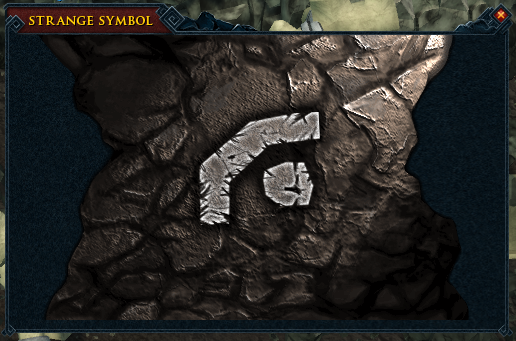 Hey, that looks like a symbol from the Goblin book, doesn't it? Indeed, that particular one is for the Rekeshuun tribe, "the goblins of the north." Hm, north you say? I wonder...

That's right, the markers are directions that lead you down the safe path. It's such a great blend of narrative and gameplay, and it fits really well into context (you're clearly moving through a mining complex, and the Dorgeshuun miners would have needed to mark the path for their own benefit). I love everything about this puzzle, it's just inspired.

At the end of this puzzle we find Mistag, a goblin miner, who reveals what would have been the big twist at the time of release: the Dorgeshuun goblins are peaceful, and don't want war with the humans. I suppose, on reflection, I shouldn't be so hard on Sigmund's writing. He's a cartoony xenophobic caricature, but at time of release most players probably would have been on his side up to this point; after all, we've slaughtered goblins by the hundreds, and the closest thing to sympathetic goblins we have are the Generals. We have no reason not to believe the goblins are about to invade. In fact, when you look at it that way, there's some quite subtly good writing running throughout the quest: we start off assuming the goblins are planning to invade, we learn that this is a unique tribe of goblins, and that they're different from other goblins (they refused to fight, after all, nd the possibility is raised that they did so on moral grounds), and then we finally meet them and they're not only friendly, they're scared we're going to attack them. It's not primo writing, for one thing we essentially take Mistag's claims of peacefulness on faith (though there is the option to be an asshole to him, the dialogue doesn't actually change anything significant), but it's a very well-done example of changing one's mind in the wake of new information, especially for 2005-era Runescape.

Anyway, we take this information back to the Duke (and Mistag gives us the option to skip the maze, which is another bit of good design albeit one that's a little buried in dialogue), but at this point it hardly matters: the Lumbridge Fancy Silverware has gone missing, Sigmund has blamed the Dorgeshuun goblins, and Lumbridge is preparing for war.

Yes, seriously. There's a lot of humour in this scene which I appreciate, not the least that the Duke uses the "bored" chathead emote, though it does somewhat beg the question of why he's going along with it when he knows its a stupid reason for war. But nevermind, we've been given our next task: find the missing silverware! Sigmund is the next obvious person to talk to, and he proceeds to throw subtlety out the window by acting like a Saturday morning cartoon villain:

So he obviously knows more than he's letting on, and oh look he has a right-click "Pickpocket" option. I can see where this is going, though contrary to my expectations I pickpocket a key rather than the missing silverware (though that probably shouldn't surprise me; that would be pretty foolish of Sigmund). The key fits the chest in the room next to the Duke's, and while I don't adore that nothing points you in that direction (for example, by telling you that it's Sigmund's room), it's conspicuous enough that it could reasonably be guessed so I'm not that upset. Inside the chest, surprise surprise, are a set of HAM robes, which is a clue that hasn't aged terribly well.

To be clear, I like the clue conceptually: we have reasonable suspicion at this point that Sigmund stole the silverware, and confirming his affiliation with HAM suggests that he's stashed it at the HAM headquarters. The problem is that, in 2021, it's very non-obvious where HAM headquarters actually is. It used to be a shack to the west of Lumbridge, with HAM members milling about openly. It still wasn't signposted in the quest itself, but it was an obvious part of the scenery that a player could reasonably be expected to be familiar with it, especially in an Intermediate quest. As of the Battle of Lumbridge, however, the hideout is now behind a completely nondescript pile of rubble a fair distance from the castle. Nothing about the entrance leads one to believe that there's anything to be found inside, and certainly nothing to connect it to HAM. I suppose an inquisitive player might have picked the lock and discovered the HAM hideout within, but it feels a lot less reasonable to me. This isn't really the fault of the quest, which couldn't possibly have foreseen the Battke of Lumbridge being a thing, but it does grate a little bit.

Anyway, once I've found the silverware it's all over bar the shouting: the Duke agrees to a peace treaty, and there's a big signing ceremony with Ur-Tag, and Sigmund lurking in the shadows like a good villain: 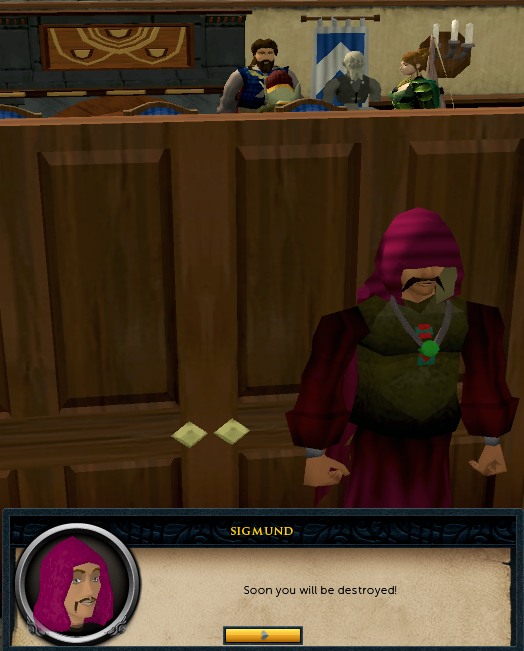 Which is an obvious sequel hook if ever I saw one, something I appreciate. Quest complete! 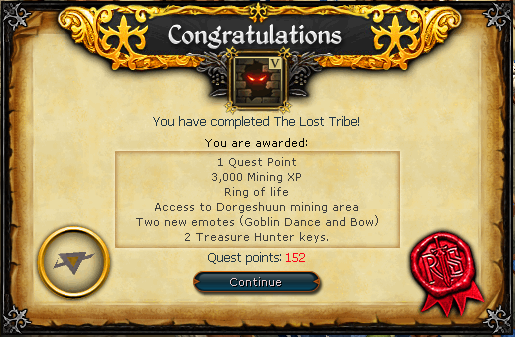 This quest has aged pretty well, actually. Good narrative choices and excellent puzzle design. It's not a perfect quest, but it's definitely a strong example of what Runescape can do. I'm looking forward to continuing this series!