The Legend of Xurdtwos/The Blood Pact

Alright friends, I took a questing break for DXPW, but now we're back, and getting into an early combat tutorialization quest (insofar as combat needed tutorializing, anyway).

The Lumbridge Path system has been nagging me to do this quest for ages, so here I go at long last. We begin by talking to Xenia, the fifth Signature Hero yet encountered (fourth if you don't count The Raptor, who I ran across killing trolls in Burthorpe and who hasn't been involved in any quests I've yet done). Xenia needs my help because three wayward teens have kidnapped a woman, and poor Xenia is getting on in years and doesn't feel up to taking them on herself. Okay, as calls to action go I guess that's not terrible; although we know that Xenia knows the other Signature Heroes (one of Ozan's random dialogues even tells us that Xenia is specifically looking for us for this quest), so I wouldn't exactly call is great either. Still, as presented in this context it seems as though we're just in the right place at the right time, which is serviceable.

Out of curiosity, I go through the rest of Xenia's dialogue before beginning the quest, and there are a few gems. I particularly liked this one, when I asked how she knows who I am:

This is a nice touch; I like the sense of narrative continuity, that our legend is beginning to grow. Out of curiosity I went to the wiki to see if there were any other possible responses, but all they have is one if you have 75 Quest Points (which Twoie does not). So that's a smidge disappointing, but I'm still happy with the moment.

We also get this gem, when I decide to ask for more details before committing to anything (Twoie has learned from Priest in Peril):

Anyway, Xenia gives me the low-down: three Zamorakian cultists have kidnapped a young woman and are taking her into the Catacombs for nefarious purposes. Nice, simple hook; it's a bit of a cliche, but there's nothing wrong with that sometimes. Before going down, though, I run back to the bank to gear up in my shiny new armour (that I made over DXP, for some Mining/Smithing xp): 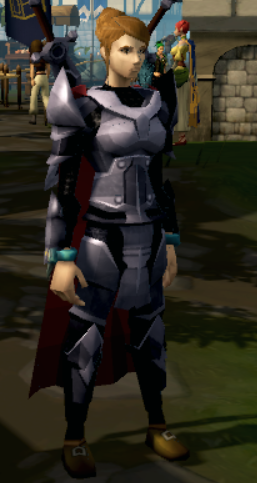 Hawt. Alright, I'm geared up and ready to go save a damsel in distress! We descend into the Catacombs, and are treated to a cutscene that introduces our major players:

Kayle, it seems, is having second thoughts about their plan to kidnap a young woman and, presumably, sacrifice her to their dark gods. While I can't really fault his logic, I can't help but feel like he maybe should have raised these concerns at an earlier point. It's a little bit late to get cold feet while you're leading your victim to the pyre, you know?

But Reese gets him in line with a Roll Credits moment:

Once again, I have to question Kayle's logic here: when have people who use the term "blood pact" ever been on the right side of history? I mean, really. But this leads us into our first combat section, where we're forced to take Kayle out before we can proceed. Xenia accompanies us, but immediately takes an arrow to the knee and has to leave the fighting to us:

I thought that's why we were here in the first place? Whatever, don't question it. Now we get to take on Kayle for realsies, and I'm laughably overlevelled. He'd probably be more of a challenge (not much more, but slightly more) if I were still a fresh-from-Tutorial-Island newbie, but I'm 30+ combat stats wearing full Mithril, so he folds like a cheap suit. Before deciding his fate, I decide to interrogate him, to learn a bit more about the situation. He doesn't have much to say that I didn't already know, but I found this tidbit interesting:

So...this quest came out two years before the reworked Rune Mysteries. Before that quest, the "ruins of the old tower" were just the basement. So maybe it's unfair of me to judge this quest in light of lore changes made after it was released.

But I'm gonna do it anyway.

So, apparently the Old Tower ruins aren't quite as secure as everyone in the Wizard's Tower seems to think they are. Which actually makes sense, considering how simple the puzzle to unlock the door actually is. But now I feel a bit silly having done that whole quest to get in, when apparently every ickle Wizard's apprentice can get down there whenever they want.

Moving on. I decide to spare Kayle, because he may be Zamorakian scum but I'm not a monster, and Caitlin is in the next room, where I can't reach her. Luckily Kayle dropped his chargebow, so I kit up and take Caitlin down very quickly (despite having only brought melee armour). Before I can go over and finish her off, I need to open the gates blocking me, but Xenia tells me what to do and it's hardly a puzzle.

Interrogating Caitlin gives me a little more of the puzzle: they planned to sacrifice Ilona to awaken the dark power in a necromancer's corpse (oh, by the way: apparently there was a necromancer living in Lumbridge for decades and nobody realized. I guess it's really easy for evil people to trick the Normies, which I guess explains Priest in Peril's odd design choices). I spare Caitlin as well, and move onto the final confrontation with Reese.

He is, of course, a pushover, but I take the time to interrogate him anyway. He doesn't have much to add to the plot at this point, but he is funny:

I totally knew people like you in high school. I decide to spare Reese as well, but he doesn't take this as well as his fellow DARK CONSPIRATORS (wow, I just channeled Evil Dave for a second there), and commits suicide. That's, uh...pretty dark for a game that was at its most popular when I was like ten. But the game doesn't dwell on it, so why should I?

Reese's death appears to have some sort of sub-optimal effect on the surroundings, but we have a damsel to rescue so there's no time for that. Untie Ilona, and we're back to the surface for the wrap-up. I take this opportunity to question Xenia on how a single arrow managed to take her out of the fight, and sure enough:

You manipulative cow. Aside from revealing how she conned me into doing all the work, Xenia also says that there are now a whole bunch of undead monsters in the catacombs I can use for combat training. That seems like the kind of thing that deserves a second half of a quest, but asking Father Aereck to put up a sign is all the containment that issue requires. 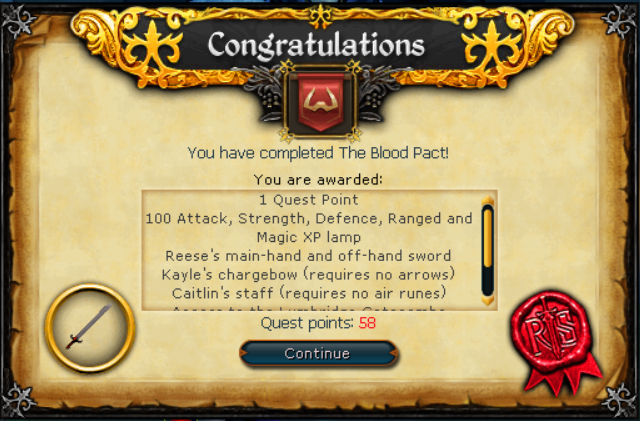 So, broadly speaking I liked this quest. Narratively there's very little going on, but the characters are all distinct and interesting (except for Ilona, but she really only functions as a MacGuffin anyway). There's a bit of lore oddness that isn't really the fault of the quest, but all in all it's a fairly minor complaint.

What I think is more interesting is how efficient this quest is. It's essentially a narrative framing of the classic combat triangle, the central concept of Runescape's combat mechanics. I like it as a tutorial in that regard: Tutorial Island also teaches the combat triangle briefly, but in a very tell-don't-show kind of way. This is more effective, and giving it a story to draw you in just makes it more engaging.

If I had any complaints, it's that it came too late in my journey; but that's really a "me" thing; I've been prompted to do this quest since pretty much the moment I arrived in Burthorpe, so I can't really say that the game was steering me elsewhere. We'll just note once more, for the record, that the narrative arc of the "timeline" quest order is more than a little wackadoo, and move on.

Next up is One Piercing Note, which is one I've been looking forward to. But you're going to have to wait (unless you're reading this in the future, in which case hello from the distant past! woOoOoOoOo!), because I'm going to try to sync up with Questcaping for the Group Questing Event on Saturday, August 22nd. No promises, because I'm often busy around that time on Saturdays, but I'll do my best.