The Legend of Xurdtwos/Tears of Guthix

We've got another short one today, but none the less significant for it. Let's talk gameplay first, because there's almost none of it. Even less for me, actually, because before I even started the quest I took it upon myself to make a bullseye lantern for convenience's sake, completely forgetting that this was the quest that actually required one, so for me the quest was basically one trip to the bank, two conversations with Juna, and done.

Despite my doing it before starting the quest, we might as well talk about the process of making the lantern, because there's not much else to say about the gameplay here. It's...not stupendous. If you know you need to, making the frame and the lens aren't bad, and the actual process of making lamp oil is explained to you pretty thoroughly. It's just the step of knowing that you need to visit the chemist in Rimmington to make lamp oil that's missing; as far as I can tell nothing in-game directs you there anymore. While fact-checking this post on the wiki I learned that there used to be an NPC outside the entrance to the Lumbridge Swamp Caves who gave instructions on how to make lanterns, but he was removed in an unknown update; it's unfortunate that he was (although I understand the swamps may have been getting a little cluttered), because the chemist is pretty dead content, aside from this function and a handful of quests, so most players probably wouldn't have him top-of-mind.

Then again, maybe I'm the one being weird here. This game has gotten so big that nobody could reasonably be expected to keep every NPC in their heads, and there are community-building benefits to relying on shared knowledge (just look at Dark Souls, for example). Is it unreasonable of me to expect every gameplay element to be signposted diegetically?

I'm also not overly fussed by how nothing in the quest suggests that you need a bullseye lantern, but it bothers me less because it is made clear that you need a blue lens, and the number of lanterns that even use lenses is pretty small, so the search space is reasonably contained. It's also worth looking at the quest in its historical context: Tears of Guthix was released in May 2005, only two months after both the Lumbridge Swamp Caves and bullseye lanterns themselves were added to the game. It wouldn't have been unreasonable at the time to assume that most players had recently made a bullseye lantern, and that they were using it while in the caves.

Aside from making the lantern, the only other puzzle involves getting across the gap to the rocks Juna wants you to make a bowl out of. I appreciate this puzzle because it demonstrates a great way to do dialogue-based signposting: Juna literally tells you what to do, but the puzzle is deciphering her metaphorical language and picking out the relevant details. I thought it was fun, and not so difficult as to be frustrating, though I can imagine it being the kind of puzzle that doesn't localize terribly well for non-native English speakers (if I'm wrong about that, please feel free to pelt me with the vegetable of your choosing).

That's enough about gameplay, let's talk story. This is a pretty significant quest because it represents some of the first in-game lore (possibly the very first) about Guthix, and certainly the first interactions with someone who knew him personally. Guthix is, to my mind, one of Runescape's more unique elements, and he's certainly a big part of what drew me into the game when I first played. Saradomin and Zamorak are old hat; the concept of competing "Good" and "Evil" gods goes back at least to Zoroastrianism, if not earlier, but a god that sits in between good and evil, and is explicitly both and neither? That's pretty unusual, at least in Western theological/mythological systems, and it was very compelling to me as a child, particularly at a time when Zamorak was portrayed as a bloodthirsty psychopath, and Saradomin as a self-obsessed git. The idea of a god who simultaneously rejected and accepted both extremes was very appealing, and is still deeply fascinating.

But I'm sure I'll talk more about Guthix in later posts, so let's leave me something for the future and talk a little about the quest's primary NPC. Juna is an interesting character because she's an object lesson in ow religious beliefs can be warped, even non-maliciously. Juna is devoted to Guthix, to a slightly fanatical degree, but she's also been alone in her cave for thousands of years. She's already started off not fully grasping Guthix's ideals, and her isolation hasn't improved matters. This will eventually turn into an interesting character arc, but for now let's just say that Juna isn't necessarily the most trustworthy source of information about Guthix. Interestingly, and I think this was unintentional, the quest itself sort of hints at this already. In one conversation, Juna strongly implies that Guthix created the world of Gielinor, or at least its inhabitants. However, this had been explicitly denied by Guthix himself in one of the God Letters, released two years earlier. I don't typically approve of requiring outside material to understand a narrative, but I appreciate this as a subtle foreshadowing that all is not as it appears, even if it was an unintended one.

The last thing I'll say is that, as someone who appreciated narratives, I like that the minigame this quests unlocks is centered on appreciating narrative. I particularly like Juna's responses to the stories of your quests, and it's a real shame that it seems like the developers stopped adding them. This time around I told Juna about the Rag and Bone Man quest, and got tis delightful reply:

THAT'S WHAT I'VE BEEN SAYING!

Final analysis: this quest is a relic of a different time. It exists purely to contextualize a new piece of content (similar to Gertrude's Cat or Dwarf Cannon), but is so narrowly tailored to that goal there's really nothing else going on. Puzzle design hasn't aged terribly well, but there are some interesting narrative dominos getting set up, ready to fall in future content. Quest complete! 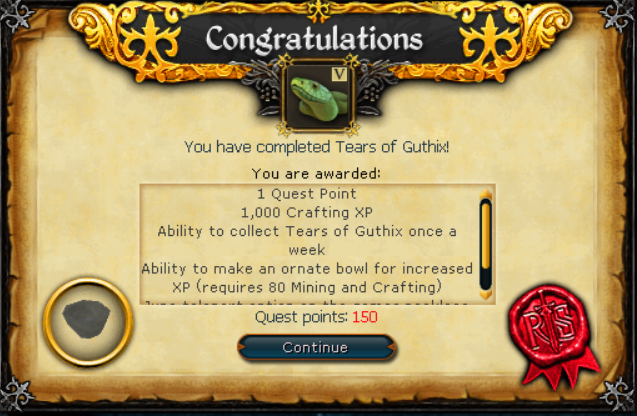