The Legend of Xurdtwos/Swept Away

No pictures this time, because this was a very short quest that was heavy on puzzles and light on dialogue. Our quest-giver is Maggie, a witch with a caravan parked north of Draynor Village. Our mission, should we choose to accept it (we do) is to take her broomstick to the three witches in the immediate area, and get them to enchant it. This will in some way improve whatever witchy concoction she's brewing.

We have three targets, and I visited them from east to west. So, first up is Aggie in Draynor. She teleports us to an instanced area, and tasks us with completing an enchantment by solving a matchstick puzzle: given an arrangement of sixteen lines of dust, we have to sweep away four of them so that only four triangles, and no other lines, are left. It's a pretty simple logic puzzle, though it took me two attempts because I wasn't fully thinking it through the first time.

Next we go to Betty, in Port Sarim, who wants us to retrieve her wand from the basement. She can't do it herself because she owns a small business and can't step away, which is fair enough. We go downstairs, where Betty's apprentice tells us that the chest containing Betty's wand won't open until all six animals in her menagerie are in their correct cages. The resulting puzzle is essentially a 2x2 sliding block puzzle (since we're told that we don't need to move two of the animals), which is the easiest sliding block puzzle imaginable. It is a novice quest, so I don't begrudge it too much for this, but I don't think it would have been too obnoxious to have at least a 3x3 puzzle.

Finally, we go to Hetty in Rimmington. She needs a whole newt, which is a bit of a problem because newts don't really exist in Runescape, only their eyes. Luckily she just got a shipment of newts in, and she asks us to go and check on it in her basement. There, the delivery ghoul frantically tells us that he got the labels on the crates mixed up, and so doesn't know which of three crates contains toads, newts, or a mixture of both. We can't just look inside the boxes because...reasons, and we're only allowed to remove one item from one box, again because reasons. However, we're told that none of the boxes are correctly labelled, which makes the solution quite trivial.

All three enchantments secured, we return to Maggie who asks for us to stir her pot with our broomstick, and quest complete! 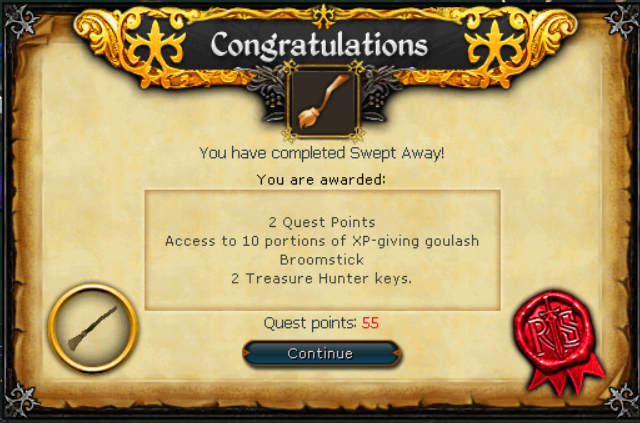 This is probably the fastest I've completed a quest on this account (and I swear I didn't look up any of the solutions). Though since this was originally just one aspect of a holiday event, I guess that's fair enough. Not very much going on in terms of story, but as a novice puzzle quest you could certainly do worse. My only real complaint is that the narrative framing of Hetty's puzzle was a bit contrived, but in the grand scheme of things that's not much of a complaint. It was fine.