The Legend of Xurdtwos/Song From the Depths

We start in one of Rimmington's houses, where a woman is fretting over two comatose men. More unusual, as she reveals when we talk to her, is that both men are muttering the same phrases in their sleep, which is definitely unusual. We of course offer to help, because it's a quest, but Lucille informs us that we weren't the first adventurer to pass by:

Ah, the Raptor, the least commonly-used of the Signature Heroes (even behind Linza. Linza is more popular than this guy). At time of writing this is the only quest that includes him, though he did pop up in a time-limited event or two, and honestly it's pretty clear why from the way the rest of the quest plays out. He's not what you'd call "narratively flexible" as a character.

Anyway, Lucille throws a curveball by revealing that the Raptor drank a potion and faded away; apparently a witch gave it to her...

Yeah, when my dealers tell me that I MEAN JUST SAY NO WINNERS DON'T DO DRUGS.

Ahem. Lucille offers us another dose of the potion so we can follow the Raptor and find out what happened to her husband, but before we do that she has a few more words of warning about the Raptor:

In a nutshell, this is most likely why the Raptor hasn't featured in too much other content. There's just very little you can do with a character like that; either you and he are both there to kill everything, in which case he's unnecessarily taking gameplay away from the player, or (as in this quest) the two of you have differing goals and he has to be some form of obstacle; unfortunately Runescape's engine doesn't have many ways to do quest obstacles, aside from combat, so my hot prediction is that he's eventually going to show up as a quest boss.

Drinking Lucille's potion takes us into the "dream world", which is really just a game instance that's been isolated to Rimmington. The rest of the quest, basically, consists of five puzzles, most of which are somewhat interesting to discuss. The first is fairly dull, just follow the trail of ghosts to the cave entrance. If it's interesting, it's that it's intuitive without needing hand-holding, which is good puzzle design. But it's also only one step above following the golden dots, so I'll say no more about it.

I will pause my puzzle analysis to note that, at this point in the quest, we get our first interaction with the Raptor, who acts appropriately psychotically for his reputation.

The next puzzle, once we're inside the cavern, is my favourite in this quest (and possibly my favourite yet encountered). We're in a maze, each room with four doors, and we have to figure out how to get out. We could brute force, it's not that hard to do, but there are also instructions in the narration that will lead you out: references to cardinal directions, and wouldn't you know the four doors are all at the cardinal directions. It's a really clever puzzle for a novice quest, I like it.

Another pause: the narration is also telling the story of the quest, and of the quest's main antagonist (well, sort of the main antagonist). It's a neat idea in that the plot is basically entirely about the characterization of this one character, but I found this part especially interesting:

At this point Twoie hasn't been to Witchaven yet (though she's passed through it, I think), but I know it's the main setting of the Sea Slug quest line. I'll be looking forward to see if this gets mentioned at all.

The third puzzle is one I'm less fond of. Once we've gotten through the caves, we're in what appears to be a ruined dwelling. The goal here is to locate places on the floor where, once we're standing close enough to them, will illuminate some sigils and continue the narration; find three sigils, continue to the next room. It's a dull puzzle because it's not a puzzle, it's just "run around the room until progress occurs." I actually wasn't sure what I was supposed to be doing until I noticed the progress bar, which to my mind is the mark of bad puzzle design: you shouldn't need non-diegetic context to solve a puzzle, let alone to recognize that you're even in a puzzle.

What's more interesting about that segment of the quest is the background storytelling elements. When this quest was released we didn't know anything about the Queen Black Dragon yet (oh, spoilers: this quest is about QBD), so there's an intriguing mystery about why this ruined structure is buried underneath Rimmington; and it is obviously an intentional structure, because it has doors and shelves and things. Also of note: 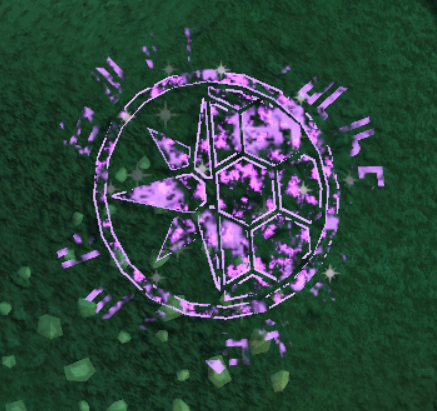 Foreshadowing rawrs angrily and throws fireballs at everything in sight

Welcome back, Foreshadowing; we missed you around here. If you were playing quests in release order, this symbol would be very familiar to you from While Guthix Sleeps, but Twoie has yet to even hear the word "dragonkin", so for her (and for a new player just starting out), this is a mystery to be solved later.

The fourth puzzle is back to being interesting again. This time we have a burning sapling we can pick up, four cauldrons, all visually distinct, that we can plant it in, and four doors with visual themes that echo the cauldrons. Once again the solution to the puzzle is in the narration, and we have to tease out the relevant aspects. In terms of puzzle design this is basically identical to the second puzzle, just with a little bit of additional complexity: planting the sapling in any plot will open all four doors, and you have to choose one. If you choose the wrong door, or if you choose the right door but the wrong pot, you still fail; so we've added a second layer of complexity, which is good escalation.

Sidebar, but who remembers when QBD was the toughest fight in the game? I sure do, because it still is one of the toughest fights for me (I DTDed her, once, to get max Varrock Museum reputation and claim the reward lamp, but I'm greatly afraid of fighting her for real).

Anyway, I like this design too: it's a neat synergy that blends the narrative and visual storytelling. Good job!

After this puzzle we watch the lost souls disappear down a seemingly-bottomless chasm. The Rator appears and jumps down after them, so naturally we must as well. What happens next isn't super-clear, but it seems as though we leave the dreamscape either shortly before or immediately after being swallowed by the Queen Black Dragon. Either way, now we're in a more organic-looking cave system, with acid pools all over the place, which is heavily implied (and later confirmed) to be the Queen's stomach. Now we have the quest's last puzzle, and another one I greatly dislike: we have to navigate the chambers of the dragon's stomach (that isn't the puzzle, there's only one way in or out), but we have to avoid stepping in the acid pools or else we get hit for moderately high damage every tick.

What we have here is a pathfinding puzzle: you have to choose where to click so the game's pathfinding doesn't take you over a damage-causing pool. Unfortunately, because Runescape's movement system is somewhat grim, this is a puzzle where the game's own fundamental mechanics are working against you. I can almost see it making sense to tutorialize the pathfinding and movement systems, but even so it's immensely frustrating to be literally fighting the game engine to complete a puzzle. Call me crazy, but I don't think the game should be going out of its way to highlight how bullshit some of its mechanics are.

Anyway, after this I-hesitate-to-use-the-word-puzzle, we finally meet our mysterious narrator, who's not exactly feeling herself: 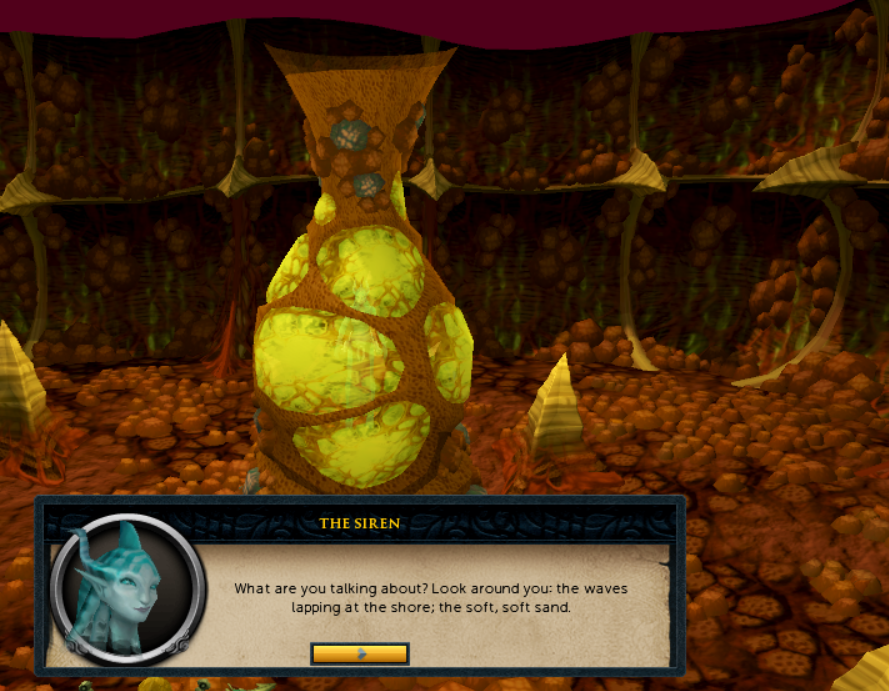 We manage to wake her up to her situation, and she gives us a little bit of exposition, though not much we didn't already learn from the narration; this is more of a quick summary for those who weren't paying attention. The Raptor comes in now, axe at the ready to kill her. She, quite naturally, objects:

...I mean, not to kick a girl when she's down, but it is a little bit your fault, hon. Maybe the specific circumstances were beyond your control, but you put yourself in a situation to be taken advantage of by indulging your addiction to ensaring strange men. You've not exactly blameless here.

Anyway, we convince the Raptor not to kill Remora, on the basis that she has a way out and we do not, and then we pop the...thing she's in with a conveniently nearby crossbow. This perhaps unsurprisingly, massively annoys the Queen in whose stomach we are firing ranged weaponry willy-nilly, and she spits us up and tries to incinerate us. Twoie and the Raptor manage to get away, thanks to Remora's teleporting necklace and the Raptor's everything-proof shield, but Remora herself isn't so lucky. A quick conversation with the Raptor, and one more with Lucille, and that's it; quest complete. 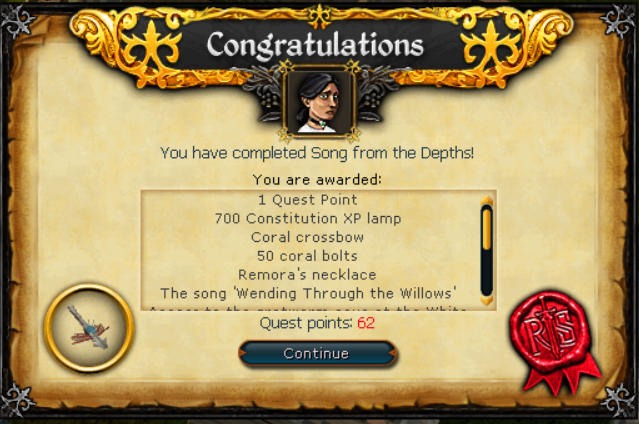 Final analysis: short quest, but interesting. Some of the puzzles were really creative and cool, others not so much. One thing I didn't mention is that this is a fully-voiced quest, but despite "song" being a narrative element, and despite there being some really good lyrical music ("Wending Through the Willows" is now one of my favourites, I've discovered), the quest doesn't really need the voice acting the way One Piercing Note did; you can definitely see the point where they've started voicing quests just because, and not because they really have a good idea for how to use it.

Also to note, this is a late example of something I mentioned a while back, about quests to introduce and contextualize new gameplay elements. In this case, that element is a new boss monster, the Queen Black Dragon, who the wiki tells me was added to the game a week after this quest came out. As I've said before, I like using quests to do that (even though QBD isn't content I particularly engage in, though for MQC I'm going to have to), so I'm in favour of it on that basis. I'd honestly forgotten about this quest, so I forgot they were still doing this as late as they were (not that 2012 is terribly late; that's almost a decade ago now), so I'm optimistic that there may be even later examples I've also forgotten about.

Final final analysis: decent quest, but a bit uneven at times. Call it a "B", yeah?