The Legend of Xurdtwos/Rune Mysteries

This is another rework I've actually played, both on my main back when it was released, and on a different (F2P) alt, which I've since abandoned, just a few months ago. I'm not expecting any surprises here, so this is going to be more of a review/critique and (extremely high-level) walkthrough of the quest.

Rune Mysteries, just in case anyone's reading who only played the rework, used to be an introduction to Runecrafting, which was a new skill added with the release of Runescape 2. It was a very simple quest, just running from Wizard Sedridor to Aubury in Varrock and back, and you were gifted with an Air Talisman and access to the Rune Essence mine. Pretty standard quest for the time, but it was very tedious in the days before the lodestone network if you didn't have the teleport spells.

It was also not terribly well-integrated with the rest of the storylines, something that the rework immediately addresses by having the quest-giver be Ariane, one of the Signature Heroes (and one we met in the Burthorpe tutorial way pack in post 1). Ariane is having trouble, because she needs to pass a message onto someone inside the Wizard's Tower, but she's been banned from entering. We appear, and she enlists us to go into the tower and talk to Sedridor instead.

So far, this is decent: it does something similar to Gertrude's Cat, where there's an actual reason why our assistance is needed. Though it's a bit weaker here, because the woman Ariane is arguing with offers to take the message herself, so it's not clear why Ariane trusts us specifically. But nevermind that now, something exciting is happening! A red wispy thing has emerged from the Tower's central beam, and is wreaking havoc! Whatever shall we do!

Ariane isn't able to help, because her ability to cast spells is disrupted (she's not allowed inside, remember?) but we're told to cast Air Strike (the most basic, level 1 spell) and draw the wisp into the beam. We're also given a mindspike, providing unlimited air runes, so we can cast the spell even if we don't have runes on us (which I don't). This is good design, and it's also a clever (if simple) positioning puzzle: you need the beam between yourself and the wisp, and then cast spells at it to draw it towards you and into the beam. So far so good, but before we proceed I'm going to take a moment to kit up with my magic gear in Draynor.

Sidenote, but is titillation a requirement for casting magic in this world? 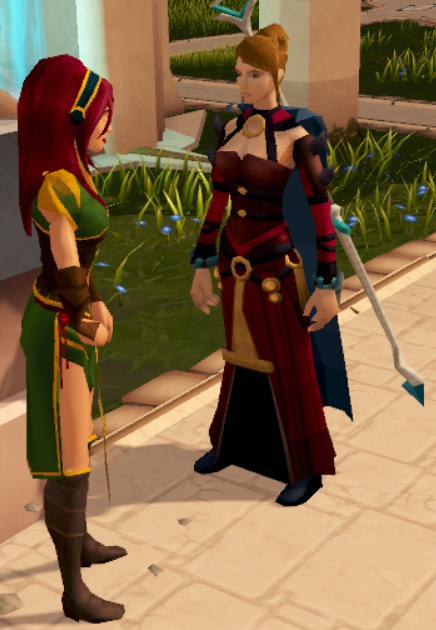 I already made this joke in my intro post, talking about all the leg I was showing off in the basic wizard's robe, but this is getting absurd: Ariane looks she's going to accidentally flash everyone she runs past, and I could stuff all of Ardougne into my cleavage. This is a bit ridiculous, game.

But back to the quest. Talking to Ariane reveals both why she's not allowed into the Tower (a version of the story, anyway), as well as suggesting why she didn't want to send a message through the Tower's doorkeeper: she's a seer, but she doesn't have any concrete details or any proof for her visions. So I take back what I said before about motivations: this is good expository dialogue, so far. We're given the information we need to understand the plot (so far) and characters (so far), but not beaten around the head with it. She tasks us with investigating: talk to the wizards, especially Sedridor and her old mentor, Ellaron, and figure out what's going on. So that's what I do, starting from the ground floor.

Foreshadowing conjures a big balloon with a massive arrow on it, pointing straight down

This is a nice bit of exposition as well, laying the barest foundation for the destruction of the Wizard's Tower story that's the core conflict of this quest (and its sequel). But it doesn't help me advance in the plot, so I continue investigating. I'm not getting anything useful out of the other wizards, but they all seem to be telling me to talk to Traiborn, so that's what I do next.

Another sidenote, I like how every named wizard in the tower has all of their dialogue voiced for this quest, even the visiting gnome and the Splitbark armour wizard. It's really nice for immersion, and helps establish their personalities. It's also just nice talking to them all, getting a sense of the internal politics and relationships in the Tower, making it feel like a living place rather than a backdrop for my grand adventures.

Traiborn is a character I really like, because he comes across as bonkers (which makes him amusing) but he has moments of remarkable depth that give you pause. Like this one, for instance:

That's a really good observation, and a good lesson for us in the real world. But more than that, he also exactly pegs the resolution of the quest: the wisp that attacked Wizard Borann came from the ruins of the old tower, underneath the current one. But that's all I can get out of him, so I move on to Sedridor.

Sedridor is also interesting because he's presented as an unhelpful bureaucratic character, but he's ultimately acting extremely reasonably. For example, if you ask him if he believes Ariane's warning, he says this:

Maybe this is me getting older, but this is an extremely good point. Just because Ariane is right doesn't mean her information is actionable; how can you reasonably prepare for something if you don't know what the "something" is? That seems entirely reasonable to me, especially since he is planning to do something, not just bury his head in the sand and ignore the problem. Anyway, Sedridor also gives me another piece of the puzzle: Ariane was kicked out of the Tower for practicing Zamorakian magic. This is an interesting wrinkle that makes me kind of not trust Ariane; not just for the demon thing (although that's a point of contention for Twoie), but also because she seems to be hiding things. Yet more interesting storytelling.

Sedridor's dialogue exhausted, I go talk to Wizard Ellaron, my last target. He doesn't give me much, just that he trusts Ariane. Interrogations complete, I'm back to Ariane to continue the quest. She sends me back to talk to Ellaron, to figure out how to open the door to the ruins of the original tower. He, much like Osman in Diamond in the Rough, very pointedly doesn't tell me that the secret can be found in a book written by Wizard Perien, in a bookcase on the bottom floor. Thanks for not helping, Ellie.

Interesting bit of foreshadowing here, which I only notice because I know how these quests end: Ellaron says that only the Archmage is allowed to know the way into the undertower, but then he tells me where to find the secret.

HMMMMMM, I WONDER IF THIS IS SIGNIFICANT.

I find Perien's book, and here begins one of Runescape's more interesting puzzles. We have twelve runes (ignoring Lunar, Soul, Armadyl, and combo runes), and twelve notes in a chromatic (musical) scale, so Perien maps them one-to-one. I take some issue with the logic of the mapping (why are Mind runes first when Air Strike is the first spell in the book?), but it's a simple enough concept. We've already been told about the organ, so surely the solution is to play five air runes (A#) and five water runes (B), the runes required for Water Surge, right?

Except, those weren't always the runes required for the spell. Before the Evolution of Combat update, shortly before the reworked version of this quest was released, the spell also required Blood and Death runes. There's a second book we get that helpfully explains this. I like this narrative addition for three reasons:

So once the two books are read, I can sit down at the organ to play them. The game helpfully puts the two diagrams, showing both the rune-to-note mapping and the runes required for water surge, on the same interface as the piano, so it's not a difficult puzzle (as I've said many times before, it's a novice quest what do you want?), and I soon have the key to the undertower. Now back to Ariane, and into the bottom level! There's some interesting (if slightly long-winded, but not enough to be too terribly distracting) exposition down here, about the four orders of wizards who founded the original Wizard's Tower. It's a neat narrative element that the tower was originally a collaboration between wizards of different faiths, in contrast to the current Tower.

But next we talk to the Rune Guardian, which gives us a personality test, a pretty typical way of assigning alignment in RPGs of this sort. It's pretty clear which answers will lead to which order, so I can easily steer Twoie in the direction I want for her. If you're curious, these are the answers I gave:

As expected, this aligns Twoie with the Saradominists. I get my snazzy hat, and continue deeper into the undertower. A variant of the positioning puzzle, nicely escalated, comes next: now I have to lure a wisp into the circle and keep it there for a time. It's tougher, but not overwhelmingly so, and Ariane discovers that they're fragments of souls, and that Sedridor's plan to get rid of them will do more harm than good. I'm now tasked with delaying that plan, so she can actually fix the problem.

The solution to the puzzle is neat, and relies on a conversation with Borann that gets triggered when you first use the organ in the library: he says that the louder notes of the organ are incredibly distracting even to Archmage Sedridor. So how do we distract the wizards from their spellcasting? Play the organ as loudly as we can. I like the puzzle because it rewards attention, even to seemingly-inconsequential dialogue. As a lorehound, I like the idea of instilling that sentiment in new players so they don't just spacebar through quest dialogue; the lore is what makes Runescape special, in my opinion, and it's a shame that so many players don't care about it.

Anyway, back to Ariane for the wrap-up. We have a bit of a sequel hook, but that will have to wait for next time. For now, quest complete! 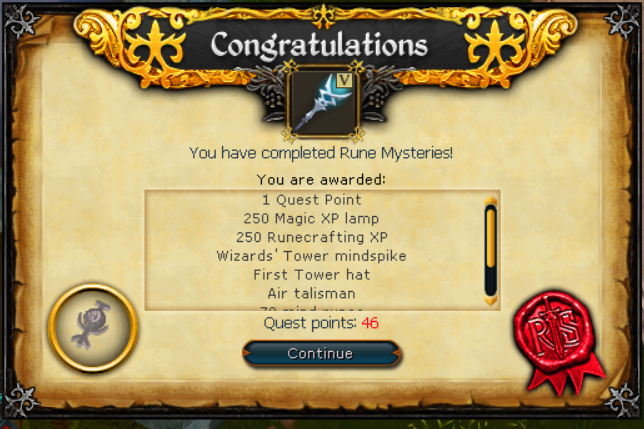 So, I liked this quest a lot. I liked the narrative drive of the quest, and I liked the puzzles. They weren't the hardest puzzles I've ever seen, but they were a good complexity for a novice quest, and well-signposted.

If I had a major complaint with the quest, it would be that it completely removes any tutorialization of Runecrafting, which is a fairly complex skill that needs a little explaining. We got a lot of the lore of Runecrafting, but little of the current mechanics of the skill (except some vague descriptions couched in expository dialogue). I would have liked to have seen that either integrated with this quest, or else placed somewhere else more obvious.