The Legend of Xurdtwos/Rune Memories

Not much of an introduction this time: this is the sequel to Rune Mysteries, the second of the "Ariane Double Bill" quest series, where we get some payoff for some of the questions raised in the reworked Rune Mysteries. I have also played this quest, but not since my main did it back at release, so this is going to be a fresher perspective than the last post.

We start out talking to Ariane, who's intently studying the ruins of the Undertower. She thinks she has a way to find out who unleashed the wisps, and wants me to be present "in case things go wrong." As far as a reason for our involvement, this is lazy but serviceable. Alright, I'm game.

Well what do you know, something went wrong. I'm also trying really hard not to think about what this reminds me of. I'm trying so hard, but come on. COME ON.

Moving on as swiftly as I can manage, my immediate thought is "we should probably tell a grown-up about this." But Ariane shoots me down:

Look, I've seen enough comedy movies, and made enough youthful mistakes, to know that this plan never works. But fine, we'll do it your way. Next is a pretty basic colour-matching "puzzle", where I have to use two runes on two different-coloured wisps, which sucks them into my inventory. Try not to think about the fact that these are bits of someone's soul that I'm casually Hoovering up.

Or, do think about it. Just don't comment on how utterly horrifying this is. Cool.

Another colour-matching puzzle, this time matching runes to the colours of the chairs in the library. One nitpick here is that the visual distinction between the chairs is almost impossible to see: the only parts of the chair that are coloured are the armrests, which are only a couple of pixels square, and the blue-grey filter (which is very atmospheric and cool) washes them out. Can you tell from this image which chair is which? 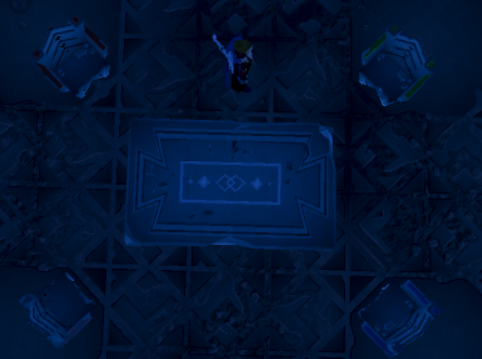 When you get very close you just about can, but personally I (and most people, I would think) play with the camera zoomed way out, so you see as much of the world as possible. Greater visual distinction would improve this puzzle, although the chairs are all labelled in the examine interface so it's not ultimately that big of a deal.

Placing the runes in the right chairs triggers a cutscene of two of the First Tower apprentices chatting. I like the scene because it underscores an narrative element of the last quest that I quite liked: the idea that the First Tower was a collaborative effort between people of different faiths. I liked this story beat, and I liked seeing it confirmed (as opposed to being a misconstruction of history).

But back to Ariane, and I've sucked up the remaining souls. This time I'm reviewing a memory involving the wizard masters (presumably the higher-level runes). This time I'm using the statues in the first room, and they're not colour-coded so I need to remember which statue belongs to which order of wizard. There's a dialogue option for Ariane to explain the statues again, in case I need it (good design!), but I just did Rune Mysteries yesterday so I'm able to figure it out.

The scene that follows is another one I like. It reinforces the collaborative nature of the First Tower, but also plants the seeds of its downfall, specifically this seed:

This is a lie: the Green Wizard is taking credit for the work of the Red Apprentice, something the Red Wizard is sure to figure out quickly. There are a lot of things I like about this narrative development:

Back to Ariane to relate this little nugget of history, and we go to the next "puzzle." When Ariane described it to me ("find an intact study and figure out which order it belongs to"), I was excited; this is emergent complexity, which is good in puzzles and especially in the third largely-identical puzzle. Finding the intact study wasn't hard, but I didn't expect it to be, but see if you can guess which wizard this study belongs to: 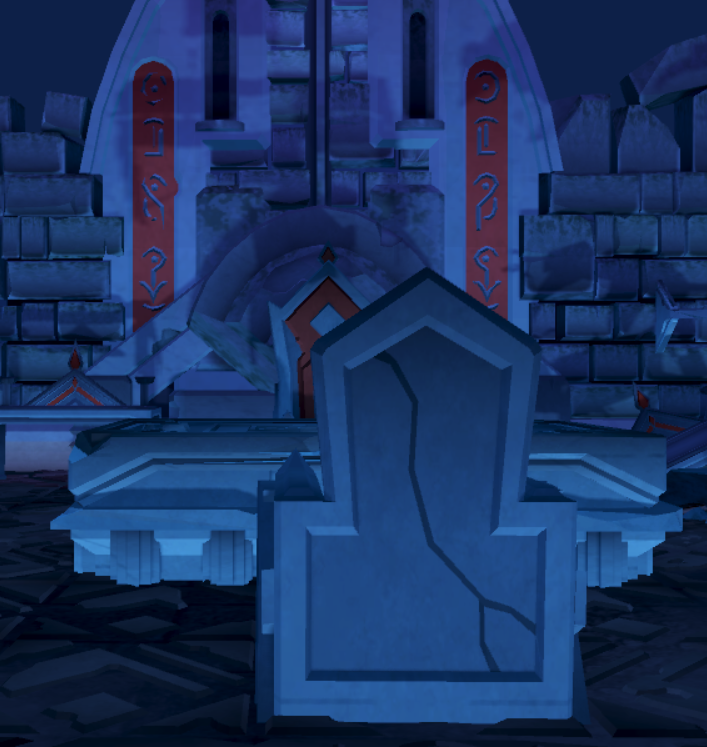 I'm a bit underwhelmed, frankly. I realize this is only a novice quest, but I was still expecting more.

This memory I didn't like quite as much, because it largely confirms the Red Wizard as the stereotypical (i.e. untrusting and slightly evil) Zamorakian:

I suppose it makes sense to show the rifts between the Order as going deeper than Azris' initial lie, but it feels lazy to show that through the Zamorakian wizard. It's not that I want Zamorakians to be unimpeachable cinnamon buns, unfairly maligned by the other orders, I'd just prefer to see more nuance to the character than "he's actually exactly what you expect from a Zamorakian, just lying about being friends with the other orders."

This could still be redeemed, mind; there's some interesting narrative hooks about the Master Wizards being set in their ways while the Apprentices being more friendly and open to cooperation, but as of now I'm not as optimistic as I had been.

Back to Ariane, and to another memory. Not much to say about this memory, it just sets up the scene we're ultimately going for, which is the casting of the initial teleport spell and the creation of the power beam that's now making Ariane go super saiyan. 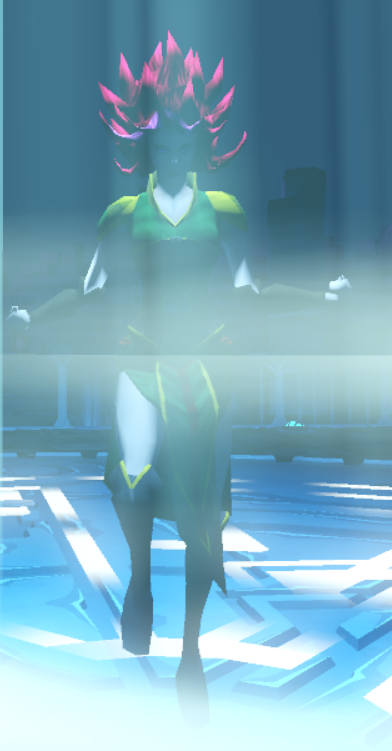 Am I wrong, though?

Anyway, at this point we finally have an interesting puzzle. Searching the various interactable objects reveals five fragments of paper, each of which contain a clue as to the positions of the eight wizards for the ritual. I like this puzzle because it seems more difficult than it is. There's just enough information to get started, and then once you do the pieces fall into place like magic. It's a clever novice puzzle.

I also find a diary, which is an interesting bit of narrative trickery I'll come back to later.

The memory that follows is a good one, that helps reverse some of my earlier pessimism. Basically: Perien (the Blue Apprentice) sees that the ritual is based on demon magic, which he doesn't trust, and the resulting debate exposes Azris' lie and the house of cards comes tumbling down. The turning point, for me, was this bit:

I really liked that it was the Blue Order ultimately responsible for the failure of the ritual, meaning that so far all four orders played a significant role in the destruction of the Tower:

That's good storytelling, and a good lesson for a quest to teach. I approve. We're still not done, though: Ariane is hit by some energy from the ritual, and collapses. Now, finally, it's time to get an adult involved. But Ellaron makes a classic villain slip-up, revealing information I hadn't told him yet:

This is the narrative trick I mentioned earlier. The diary I found is written in such a way as to imply it was written by the Red Apprentice of the First Tower, Kelavan, describing a conspiracy to destroy the original Tower. But here we find out it was actually written by Ellaron, describing a conspiracy to destroy the new Tower. It's a simple bit of narrative sleight-of-hand, keeping you looking the wrong way for the real villain, but it's an effective one.

After confronting Ellaron, we move into the endgame and the final puzzle. Now we have to draw out the soul fragments into our runes, with a timing element based on the colour (and intensity) of the beam. I like the fact that the beam's intensity isn't described as a factor in the puzzle, but it makes perfect sense. It's a nice bit of puzzle escalation.

The puzzle itself is nothing special, but the narrative here is interesting, as each of the eight wizards are given a chance to rebut Ellaron's goals. These mostly work, and it's nice to see all eight working together for common purpose, but this bit annoyed me:

They were your friends, but you outright said you didn't trust a ritual based on entirely Red magic. That doesn't seem congruous, and greatly annoyed me. Other than that hiccup, I liked the conclusion of the eight wizards setting aside their differences. After I've sucked them out, they all go into Ellaron and teleport him to the Abyss, where he can explode without harming anything. Quest complete. 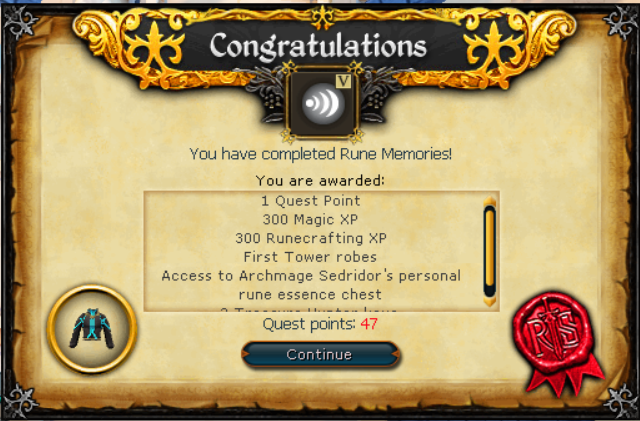 Overall, I liked the reworked Rune Mysteries better. The puzzles were more interesting and the narrative was tighter. There were some good ideas in this quest, but ultimately I don't think it got the best of the creative juices.