The Legend of Xurdtwos/Rag and Bone Man

This is some "first five minutes of Supernatural" bullshit, right here. I mean, this dude's a serial killer, right? There's no other good reason for why an old man is carrying around a Santa sack full of bones, while living in a house that is also made out of bones. That's too many bones, you guys. But the Odd Old Man somehow has an explanation that satisfies us, sort of, and he gives us a quest: get him still more bones.

Yeah, even the sack can't believe we fell for it.

This is sort of an idiot plot, in the same vein I discussed in Priest in Peril, and that's not really a good thing, but this quest is saved by two things:

The actual meat of the quest is nothing to write home about: we're given a list of eight monsters to kill, and each one drops a unique bone that we need to collect and return to the Odd Old Man. The only one of the eight that remotely gave me trouble was the Giant Bat, and only because I was trying to train melee (which they're strongest against), but even that wasn't too bad.

Before we can turn the bones in, though, we need to polish them. And for that we need vinegar, as supplied by Fortunato in Draynor Market. We have to talk to him about it before he'll sell us any, though, and he seems rather put out by the implication:

For the love of God, Fortunato. Fortunately, he seems to recognize our patron, because there could not possibly be two people fitting this description:

At least, I hope not. Eight jugs of vinegar, eight sets of logs, and eight polished bones later, and quest complete! 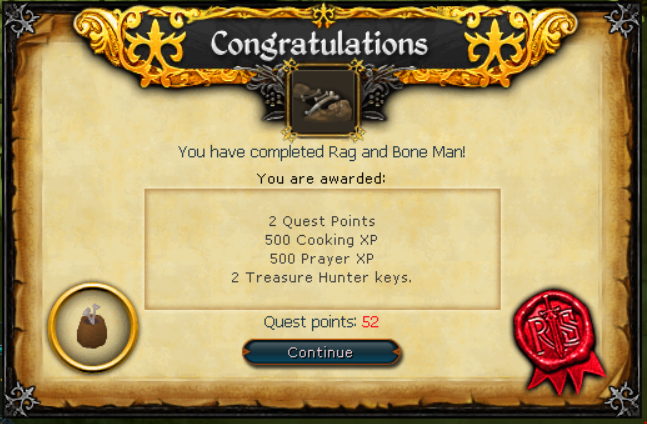 This is a bit of an odd duck quest, in that it doesn't really seem to have a purpose. It doesn't introduce any new gameplay, aside from the post-quest bone collection minigame, and doesn't significantly expand the lore. The sequel eventually did both of those things via the Skeletal Horror (though the lore addition only came in 2018, when the Horror started dropping a lore book), but it didn't come out until two years after this quest. There's also very little narrative to it, although there are some amusing lines, and it doesn't really present much of a challenge except to very low-levelled players.

In isolation, this is a peculiar quest. It's not necessarily "bad", it just feels very strange looking back from 2020, when it doesn't seem to really be doing anything. In some ways I actually wish we got more quests like this, low-stakes affairs with some jokes and some unobtrusive puzzles, but I'm too much of a lorehound to be totally happy with that, which I suppose is why content updates take so long to go out. No pleasing some people, apparently.