The Legend of Xurdtwos/Priest in Peril

Ah, Priest in Peril; one of those fundamental quests that every account absolutely must do, because it unlocks the entire region of Morytania. I was surprised to learn that this quest had been made available to free players, though since the entire region of Silvarea was as well I guess it makes sense. I was also surprised to learn that it is apparently no longer necessary to complete this quest to gain access to Morytania, which kind of annoys me. As a lorehound, I support quest-locking of content, even content as big as Morytania (and really, is Morytania any bigger than Prifddinas? In terms of land mass, sure, but content?). It's not like this is a difficult quest.

But whatever, questlets go brr and all that.

Complaint right off the bat, which doesn't bode well: our quest begins by walking up to the King of Misthalin and asking for a quest. Excuse me what? Is this a thing people can just do? Bear in mind that, at this point in my career, the most significant thing I've done in Misthalin is return the Shield of Arrav. That probably shouldn't be getting me facetime with the King. In fairness the game does lampshade how odd this is:

But, and I feel like this is a lesson a lot of modern movies need to learn, lampshading a plot hole doesn't make it not a plot hole. It would make more sense if we were talking to an advisor, or something. Anything other than walking up to the leader of an entire country and saying "gib quest pl0x."

Anyway. The task Roald assigns us is to go check on Drezel, in Paterdomus temple to the east. To the quest's credit, it explains why we need to do this instead of any of King Roald's squillion subjects: they demanded payment. Well that doesn't bode well for our reward, but all right. Unfortunately, the quest loses that small bit of good will almost immediately:

To summarize, this is basically how the conversation went:

TWOIE: Give me a quest.
ROALD: Okay, do this quest for me.
TWOIE: I guess I'm not busy, okay.


YOU ASKED FOR A QUEST, WHAT DO YOU MEAN YOU "DON'T HAVE ANYTHING BETTER TO DO"?

This frustrates me because it's just sloppy writing. The only reason Twoie's response would make sense is if she's disappointed in the quality of the quest. But what the hell were you expecting? You haven't proven yourself a hero yet; Roald even refers to you as "Adventurer", because he doesn't know your name. But by the same token, you're apparently important enough to be able to walk up to him and ask for a quest. It's sloppy and inconsistent characterization.

If I was to attempt a redemptive reading, it would be this: this quest was released in 2004, well before Runescape had much of an overarching story or really any narrative development of the main character. The game is running on the assumption that you've played quests in release order, which means by this point you would have completed such quests as Dragon Slayer, Fight Arena, Underground Pass, and Legend's Quest. By that logic, your name should be ringing far and wide throughout the kingdom, and it makes narrative sense for your character to be important enough to talk to King Roald in person (though it's odd that he doesn't know your name) and be disappointed in the quality of quest he's giving you.

It makes sense for a returning player, who's been in the game since before the quest was released. It makes dramatically less sense for a new player (or a "new" player, like me).

That's enough rambling, let's move on. We go to Paterdomus, but we can't get in so we politely knock at the door. There's some humourous dialogue options, which I naturally explore for chuckles, but eventually we move on with things:

Okay, so this is the most obvious lie in the history of lies. Obviously now we're going to be suspicious, try to get in and release Drezel from where he's being hidden upstairs. What we're certainly not going to do is kill the dog that the worst liar in history asked us to kill.

Oh, I guess we are doing that.

Even he can't believe that worked.

Another digression on narrative. In literary criticism there's a concept called the "idiot plot", where the plot can only happen because everyone involved in it is an idiot; the resolution of the central conflict is glaringly obvious to both the audience and to any reasonable person existing in that reality, but the characters ignore it for no clear reason. A lot of bad horror movies fall into this; if you're screaming at the screen "no, don't split up" or "don't go down that dark alley", chances are you're watching an idiot plot. They aren't necessarily bad, but they have to be used carefully because they run the risk of ruining immersion.

If it were clear that this is information our character couldn't have access to, for example if there were a cutscene into another room where these two characters were talking, that would be fine. However, these are presented in dialogue boxes as part of normal dialogue, which codes that information as part of communication with our character. Translation: it looks like the player character should be aware of both of these facts, but we're forced to act as if we're not. This, to put it blunt, doesn't work. It would be vastly improved if we (meaning the player) thought that we were talking to the real Drezel, and were given no reason to think otherwise.

But since idiocy is the only way to proceed, idiocy is how we shall proceed. We go down to kill Cerberus, which isn't very hard, and go back to King Roald to report on our success.

He is not pleased, and pretty quickly points out the same thing I just did:

Once again, I feel obligated to point out that lampshading a plot hole does not resolve the plot hole. Roald sends us back to find the real Drezel, and this time we're able to enter Paterdomus unmolested. The fact that the Monks of Zamorak don't attack, even though they went to great effort to keep us out, is the sort of annoyance I've mentioned before, so I'll just note it quietly and move on.

We find Drezel in a cell on the top floor, where he asks for our help in both getting him our, dealing with the Vampyre locked in the coffin next to his cell, and ensuring that the protective power of the River Salve hasn't been affected. There's an optional expository conversation, which I of course take, and am gratified to see that at least Twoie is learning:

We can also ask about killing the Vampyre, but Drezel shoots that suggestion down:

This again feels like a bit of an idiot plot, since we've already killed one Vampyre, but since the two quests aren't prerequisites I'll let it slide for now. First order of business is freeing Drezel, and he says that his captors likely have the key. No problem, head downstairs and kill the first Monk of Zamorak I see. They're a little bit tougher than Cerberus, and I'm still using my bronze melee gear from the tutorial (stockpiling some Protean bars for DXPW), so I need to run to a bank to swap out for Ranged gear. But soon enough I've killed one, and grabbed the key he dropped. Oddly, though, the key doesn't fit the lock.

I'm not sure what to do at this point; I'm not getting any clues from Drezel. Killing another monk gets me nothing, and the only thing visibly searchable is the desk, which is empty. Lacking any better ideas, I decide to head back down underneath the mausoleum. I find a lone ghoul, who is very resistant to my arrows, but I manage to safespot him and whittle his health down. Alas he doesn't drop anything. But I also find a bunch of statues, each of which is holding a different object. Sure enough, one of them has a key, which I swap out for the one I got from the monk.

That key works, but now I need to figure out how to deal with the Vampyre. Drezel suggests water from the Salve, and I saw a well down in the chamber with the statues, so I head back to the bank for a bucket and some rope. Probably didn't actually need the rope, but I take the bucket of Salve water back to Drezel. He blesses it, I pour it over the coffin, and a thing occurs that suggests I had an effect. Talking to Drezel confirms it, and I go to meet him in the statue chamber. We need to patch-fix the river, so he suggests a stone filtration system. I'm sent off to fetch 50 bloody Rune Essence. Unfortunately my mining level isn't high enough to mine Rune Essence yet, so I decide to try Archmage Sedridor's chest in the Wizard's Tower, which will contain essence relative to my Runecrafting level (currently 6). 105 essence inside, perfect.

Despite saying he needs 50, Drezel only takes 25 essence from me, and declares the quest complete. 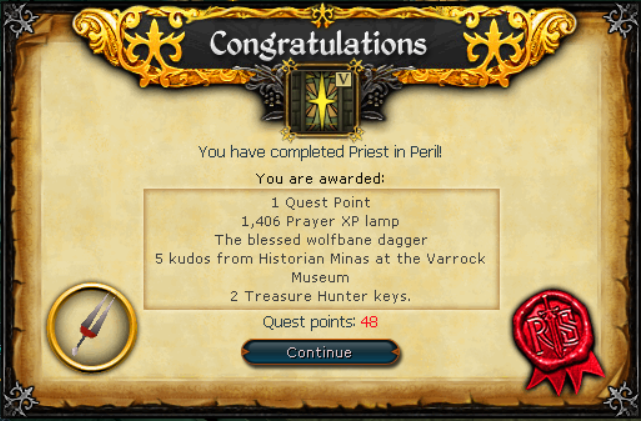 Looking at the wiki reveals the difference: it required 50 regular rune essence (the kind only available to free players) or 25 pure essence.

So, as you'll maybe be able to tell from reading everything above, I didn't care much for this quest. There are some truly bizarre narrative choices, and the entire first act is almost totally indefensible. The rest of the quest, everything from the second conversation with Roald on, is better but doesn't save it. For one thing, the puzzles aren't very engaging. I liked that I had to swap the golden key for the iron key, but there wasn't very much to it besides piecing together that I had to go back down to where the dog was, and everything from then on s just fetch quest.

Also, and this is a minor point but one that grated on me, is that Drezel's dialogue was very rambly. Normally, Jagex makes an effort to have a single "thought" (a sentence, or a couple of related sentences) in a single dialogue box. Drezel was the first time I noticed that break down; he just had massive monologues, split by what looked like the character limits of the dialogue box. It was distracting to read, because a box would end mid-sentence. If the intent was to make him seem like a boring, droning person, then well done; but I do think there are limits to how far you should sacrifice gameplay for the sake of narrative. It rubbed me very much the wrong way, is what I'm saying.