The Legend of Xurdtwos/Myths of the White Lands

Much like Swept Away, this quest was originally part of a holiday event. As such, it's also pretty puzzle-heavy, though the writing is a bit more interesting than Swept Away.

We start off talking to Explorer Jack, who has learned of some fabulously valuable stones in the Land of Snow. How did he learn of this, you ask? Why, from a Snow Imp of course.

Sterling logic there, Jacky boy. Alright, Jack tasks us with fetching the stones for him, and he tells us to go visit his friend Isidor, in the Wizard's Tower, for a teleport. We do, and are immediately confronted with a whole bunch of slippy-slidey floor puzzles. These are annoying but not actually that hard, so let's skip straight to the end. The second-to-last room is a straight shot into the final room, where a Yeti is waiting. He's so upset with my presence that I immediately turn around and head back into the last room. Obviously I need to get rid of him somehow.

Back in the penultimate room, there are now two stone blocks that weren't there before. There are also two block-shaped holes in the wall, which are interrupting a second path I saw earlier. Okay, I think I can figure this out. A little more slippy-sliding, and the blocks are in place and I've followed the upper path to a little platform in the yeti room. I can immediately see what looks like a massive Alpine horn (you know those giant tubes Swiss people yodel into?), and I've got an idea how to solve this puzzle already, but I can't interact with it. Running my mouse over things reveals a mural on the wall I can click on, which I do: 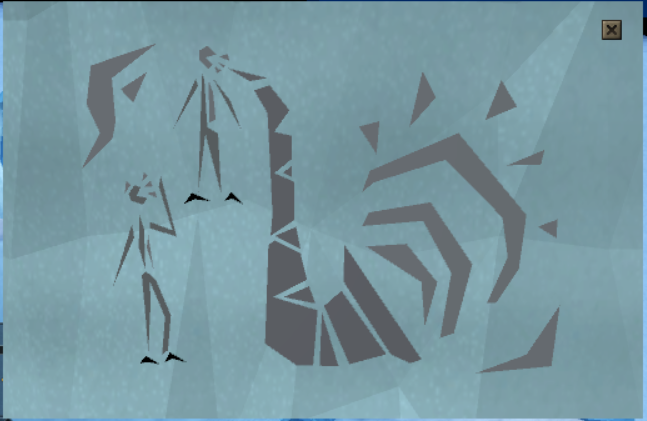 Okay, cool. Maybe slightly over-tutorialized, but since I've been going on and on about signposting puzzles I'm not going to mark them down for it. Now I can use the horn, which knocks out the Yeti and I can wend my way back to pick up the stones he's been guarding, and then navigate my way out of the caves. Once I'm get outside, I'm greeted by three Snow Imps, who reveal the big twist:

It was a prank, bro! This is going to be all over RuneTube!

It turns out, the "valuable stones" are actually just Yeti poo. The imps intended to prank Jack, because they thought he was annoying (and, fair enough), but he sent us instead and they feel kind of bad about that, because we're not quite as annoying. So they enchant the dung for me, so it won't thaw immediately upon leaving the Land of Snow and make me smell like poo.

Rude. But I guess it's better than the alternative, so I take it.

Back to Jack, and the game gives me the opportunity to either reveal the truth or roll with the prank. It's not very Saradominist, but I'm feeling a bit miffed that Jack sent me to explore the Land of Snow while he sat back and didn't have to deal with an angry Yeti.

I'm sure Saradomin will understand. 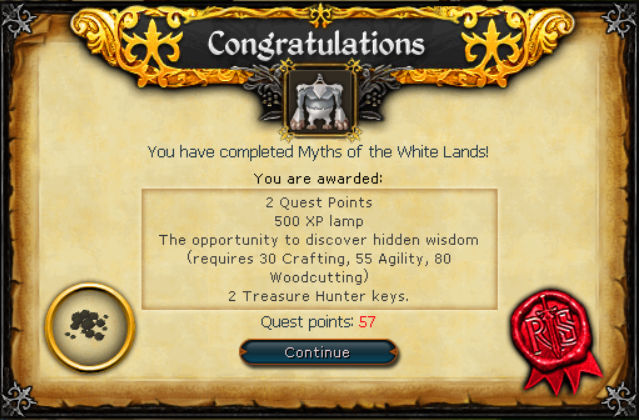 Much like Swept Away, this is a quest that's basically fine. My one major complaint is that I think there was a bit too much backtracking. Once I've taken care of the Yeti, is it really necessary for me to re-solve one of those ice puzzles? And then navigate backwards through all of the rooms to get to the exit? Granted it's not exactly hard to do that, but I already know I'm great, stop making me prove it. Personally, I'd have preferred if using the horn knocked some icicles down to form a one-way passage directly to the lower floor of the Yeti's room, and leaving the room with the stones immediately transported me to the first room and the interaction with the imps. Much cleaner, and removes a lot of the nuisance of backtracking.