The Legend of Xurdtwos/Murder Mystery

This is one I've been looking forward to, for two reasons:

Hee-hee, I'm having fun already. It's like in an episode of Poirot (in hindsight, entirely too many episodes), where he's on vacation with Hastings and there just happens to be a murder only he can solve. Is it contrived? Of course, but it's part of the genre conventions so I'll let it slide.

This is all the guidance I've been given, so let's trim our moustaches, put on our deerstalker caps, and dive right in!

According to the guard, Lord Sinclair was found in a room locked from the inside, seemingly stabbed, and a strange smell in the air. So far this is about a dozen Agatha Christie novels already.

An annoyance right off the bat: I start off talking to the Gossip, to gather information about the family before I start interrogating them and searching for clues, but reaching the end of a particular branch of the dialogue tree ends the conversation; so to see all the dialogue, I need to navigate the entire tree quite a number of times. This is very frustrating, but I suspect it was a limitation of the engine at the time of release; still, it could do with some updating.

Talking to the Gossip reveals that all of Lord Sinclair's six children had something to hide, which their father would not approve of:

So all of them could potentially have a motive for murder. The Gossip also told me that there's a poison salesman in Seers' Village who recently made a big sale, so that's my next stop. His product seems to have a thousand-and-one uses:

So the poison, much like Communism, may be a red herring. However, it does have a distinctive odour, which could be a useful fact, as is that he sold one bottle to each of the six Sinclair children. So that doesn't narrow things down, but it does give me something to look for. Back to the house to begin questioning suspects.

Interrogating the children and staff didn't tell me much. Each servant overheard an argument between one of the children and the victim, related to the secret the Gossip discussed, so all six of them have a motive. Each child claimed a legitimate purpose for the poison, which was corroborated by one of the servants; no inconsistencies there. Next thing to do is to check those spots for physical evidence:

Carol is now my prime suspect, but right now I only have a missing bottle of poison. I need to link that poison to the murder, which means it's time to investigate the crime scene. There's a dagger, which doesn't seem strong enough to have done the deed, and a pot that stinks. Let's try dusting for prints. I have to run to the bank for a pot of my own, but there's some flour in the kitchen I can dust with. I can't get anything from the pot, but the knife takes some dust; now I need to figure out how to lift a print. While I'm looking for that, I search Carol's room and take something belonging to her, for a matching print.

Finally I find the flypaper in the gardener's shed, and use two pieces to take two prints: one from the knife, one from Carol's object. Comparing them, I find that they're identical.

Evidence in hand, I return to the guard to accuse Carol, and:

I need more? I can place Carol at the scene, and I have proof that she lied about the poison. What more do you people want from me?

I go back over the crime scene, and notice the smashed window for the first time, where I find some thread. Hmm, what can I do with this? I ask Carol, who is extremely helpful:

Just to cover all of my bases, I look around to see who else is wearing red. Anna and Bob are the only two; Anna doesn't recognize it, but it could have come from Bob's trousers as well. Still, I think there's conclusive enough evidence to convict Carol. So I go back to the guard with my latest find, and with all three pieces of evidence: 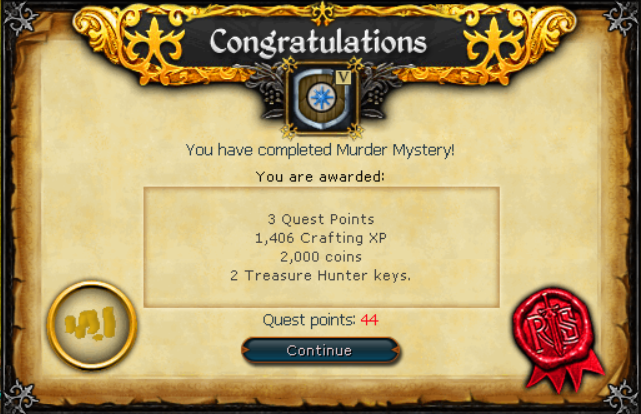 This was a fun quest. I like how it was contained in a small area, so you don't have an overwhelming amount of ground to cover looking for clues, and I like how the solution is one that requires some critical thought (although, obviously, the limitations of the medium mean it's not hard to either brute-force or get the pattern from a guide. But I enjoyed thinking like Hercule Poirot for a moment, even if the case doesn't have any of the twists of a more complicated murder mystery.

That was one flaw, actually, that the story was very straight. But I guess adding more twists would have complicated the programming too much for 2003. The other flaw, as already discussed, was the dialogue tree issue. But overall, an excellent quest