The Legend of Xurdtwos/Let Them Eat Pie

Greetings, friends. I've been taking a bit of a break from Twoie after the excitement of One Piercing Note, because I was busy with work, skilling on my main, and doing some stuff for Questaholic (look for my article in the next issue; apparently I have a column now, because I didn't have enough other projects on the go). But I carved out some time to tick the next quest off my list, so let's move right on to...

Actually, before I get into the quest, a brief addendum to my reviews of Wolf Whistle and Druidic Ritual. I was a little hard on those two quests because they're positioned as tutorials but don't actually teach their respective skills very effectively. What I didn't realize, and which I learned from watching Mod Stu's tutorial retrospectives on Twitch, was that they (along with this quest) were released alongside the Troll Warzone tutorial. That experience was intended as a more guided tutorial, much like Tutorial Island (just with member's skill included), and would have introduced the Summoning and Herblore skills more closely to how they actually work in-game.

With that additional context I'm somewhat better-disposed towards those quests; it's just a shame that the Troll Warzone tutorial was removed, leaving some unfortunate artefacts behind.

That little housekeeping note out of the way, it's time to Eat some Pie!

We start off talking to "Nails" Newton who, like all people whose names come in inverted commas, is shady as all get-out, and wants us to perform some underhanded shenanigans.

Twoie, honey. You don't exactly have an unimpeachable reputation; lest we forget the whole "sacred guard dog" thing, or the number of innocent creatures you slaughtered to appease the poorly-articulated whims of a bone-obsessed nut. Also I think you're technically AWOL from the Dwarven Black Guard?

But nevermind, "Nails" assures us that our target is truly deserving of all the nasty things that are about to befall him:

So, I don't want to get a reputation as a defender of exploitative capitalism or anything, but I do have a business degree so I have a question: if Rolo is buying up the local food, surely some of your ire should be directed at his suppliers? I mean, it's not like he's shipping in food from Ardougne, from people who are many steps removed from the human cost of his greed. He's set up shop in Taverly, meaning that his suppliers are:

I can't help but feel like the guy who decides to sell food to the comically overweight guy over the starving refugee living in his backyard deserves some portion of the blame, right? Am I the weird one?

I don't know, moving on. Still not entirely convinced, "Nails" tells us to talk to some of the merchants, let our own eyes convince us that they deserve punishment.

Okay, I changed my mind. Disregard everything I said before, let's eat the rich.

No, we're just going to make a really disgusting pie that will make Rolo throw up? Okay, I guess that's good too. Probably easier, honestly, if less satisfying.

First order of business: maggoty dough for the pie crust. "Nails" instructs us to make flour in the windmill, but to add some fishing bait (for any of my readers who aren't fishers, fishing bait is usually worms; in Runescape it's maggots) to the wheat before grinding it. This is, apparently, the hardest part.

One odd note here: "Nails" has dialogue telling us where to go to get wheat to make flour, but then there's a non-dialogue info box saying that there will be fishing bait along the way. Why wasn't that dialogue? I mean, I understand why the warning was there: preemptively stop people panicking about not knowing where to get fishing bait, or spending money to buy fishing bait. But I don't understand why it was necessary to break immersion by inserting a non-diegetic interface like that. It's just an odd choice.

Anyway, I've soon got the maggoty flour and have brought it back to "Nails" for conversion into a pie crust.

Uh...huh. I mean, I guess this was intended to be one of the first quests a new user had ever done, so that maybe did seem like a lot of work. but seriously guys? The wheat field was like twenty tiles away, and the mill is directly south of the inn Rolo is staying at. "Hard work." Geez.

The next two tasks are to rotten up a raw crayfish (by burying it in filth, obviously) and shoving a potato down a kebbit hole to get it good and gunky. I didn't take screenshots, because they were very simple tasks, but I did take this one because it made me giggle:

Man I hope that reference scans.

Ingredients assembled, I can finally create my abomination. 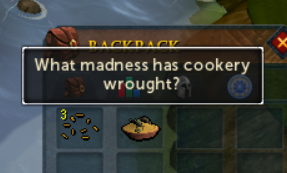 I guess this is as good a time as any to say it: I really like the comedy of this quest; there are some great lines in here, and I deeply appreciate all of them. Another example: because my crime against food is so truly horrendous, neither "Nails" nor myself are certain even Rolo will eat it. The solution is to steal some very expensive, and presumably very pungent, spices from a merchant called Foppish Pierre (sidebar, he calls himself foppish?). Before I pickpocket Pierre, I decide to talk to him, but he's not even sure how to converse with one of the poors anymore. Twoie's response:

Love it. I nab the spices while Pierre's not looking, and now I've got a pie that actually seems good enough to eat. Now I can go bring it to Rolo. Before I do, though, I take the opportunity to talk to his majordomo (I guess that's what he is, anyway), Kebble. Kebble is as snide and contemptible as the rest of the pompous merchants, but I do have to give him a modicum of credit:

Unlike the rest of his ilk, he doesn't seem to hold it against me that I'm lower-class than he is, and is actually willing to talk to me. That's...well I don't want to say good, exactly, but it's certainly better. Kepple doesn't really advance the plot, though he does give me some interesting background on the conflict. Apparently the merchants are all from Falador, and part of the reason they're doing this to the Burthorpe refugees is because of the rivalry between the two towns. Seems like a bit of an extreme reaction, but what do I know.

At long last, I talk to Rolo the Stout. He's more than a little upset that the pie I brought for him isn't what he ordered, but I appeal to his vanity, and his gluttony, to smooth things over:

There's a fairly long sequence here that's just me convincing Rolo to eat the pie; I wouldn't even bring it up, except that I'm pretty sure this one conversation is longer than the rest of the quest, which feels strange. Still, there are some good jokes. There's a moment where I can choose what to tell Rolo the pie is called. Two of the options are appropriately fancy-sounding, but give away the dish's dubious origins (such as "crayfish a la manque"; loosely translated as "manky crayfish"), but what did I obviously go with?

Whatever option you pick doesn't matter, Rolo does eventually eat it. Though not before showing off yet more of his sparkling personality:

At last, after all of this, Twoie is finally convinced this is appropriate retribution:

Now that we've given him the pie, it's time to wait for him to eat it. This is where the quest takes a bit of a turn that, depending on your sense of humour, is either magnificent or horrible:

Fortunately I love Monty Python's Mr. Creosote sketch (which this quest is clearly influenced by), so I thought it was hilarious. Kudos to the sound team, because that is some truly excellent foley work; I'd be really interested to learn how they made those effects, and I hope the answer wasn't "feed one of the sound engineers bad sushi and record the results".

Another gag I quite liked; Twoie keeps trying to declare her task complete, but Rolo keeps interrupting her with more chunks; finally, she's had enough:

I'm a sucker for jokes like this, where the character is arguing with the narrative itself. Now, at long last, we can do the thing we needed to do all along: loot Rolo's chest and steal his wax seal. But when I go back upstairs I notice Kebble cowering, so I take the opportunity to talk to him; he's got some choice lines about the event we just overheard and he, apparently, witnessed first hand:

Once again, I love the humour in this quest. Grab the seal, take it back to "Nails", and then take the stamped letter to Foppish Pierre, and quest complete! 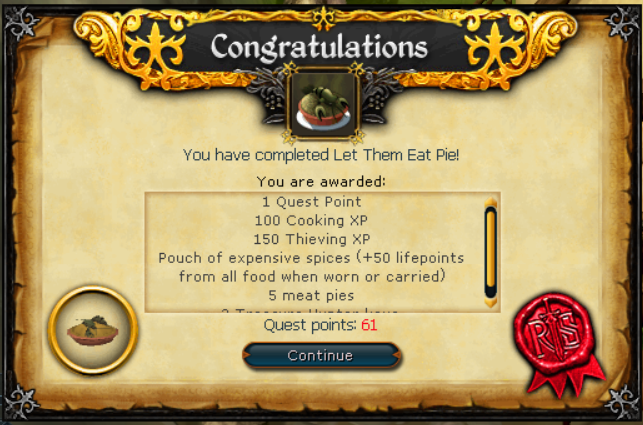 So, this is an interesting quest for a lot of reasons. One thing that jumps out (because Mod Jack mentioned it on a stream) is the comparison between it and Cook's Assistant, which this quest is basically the evil twin of. Both were intended to be one of the first quests new players do, and both are focused on assembling the ingredients to create a baked good, and both broadly tutorialize the layout of the cities they're set in. There are a couple of obvious reasons why you wouldn't want this to be someone's first quest, but also a few reasons you would:

Though, I think that second point is worth writing a little more about, because although the overall sense of humour is very Runescape-y, the politics are I think somewhat unique. I don't think there's any other quest that goes quite so hard into "eat the rich" territory, which is somewhat impressive for a quest that came out in 2012. It fits quite well into the political climate of 2020, but it stands out as particularly savage for Runescape.

My biggest complaint is that the conversation with Rolo goes on a bit too long for how non-interactive it is; it's basically a cutscene, except you have to keep clicking to advance the dialogue, and there's only one dialogue choice. My advice would have either been to go full cutscene, or put in more opportunities to affect the dialogue. As it stands, that stands out as a bit of an odd moment. Good jokes, just oddly structured.

Overall, though, a good quest.