The Legend of Xurdtwos/Gertrude's Cat

This is an interesting quest to do so soon after Dwarf Cannon, because they share a similarity: both exist to introduce new game mechanics to players. In the prior case, it was a new form of Ranged combat that in a lot of ways presaged the introduction of aggression potions thirteen years later. Here it's cats, the first pets and followers in Runescape; again, a sign of things to come.

I sort of hinted at this in the Dwarf Cannon post, but I was too angry at the quest to really articulate, so I'll go into more detail here: I wish Runescape did more of this. Contextualizing gameplay elements within the world is great for immersion and storytelling and all of that stuff, and it's fun. I'm struggling to think of a recent example of something like this being done; the only things I'm coming up with are the Arc miniquest series, each of which focuses on an island in the Arc region and introduces you to many of the mechanics of the region, and Curse of the Black Stone.

Don't get me wrong, I'm glad that there are still elements of this, but imagine if the Archaeology release had come with a little quest to set up the lore elements. They did the pre-release teaser things, which was neat if you were around for them, but if you missed them (like I did) you're SOL. Doesn't seem like too much to ask, right?

Anyway, I've rambled for long enough. Let's get into the quest. It's a simple hook: Gertrude's cat is missing, she's too busy with her kids to go looking herself, so she enlists our help. It's a good hook, and it neatly resolves one of the problems I have with these early fetch quests, which I've whinged mightily about before: why are we needed to help with this?

Alas, she's too poor to give us much reward, but surely the reward is in the helping...

You mercenary, Twoie. You've grown fat and complacent on these generous XP rewards.

But the promise of chocolate cake and kittens is enough to persuade me (as it should persuade anyone, really), and I'm off to Varrock Marketplace to interrogate Gertrude's eldest two sprogs, who are apparently just wandering around the big city unsupervised. This is fine.

Gertrude's kids, upon being approached by a strange adult assuring them that "it's important", naturally assume that they're in trouble:

Though maybe I should be keeping more of an eye on this kid:

Budding criminal mastermind right here. We've got a dialogue puzzle next, which is fun. Naturally I start out with every little kid's greatest fear: telling on them to Mum. But he's got our number:

...y'know what, fair enough. Next I try appealing to his guilt, subtly reminding him that his mother's beloved cat will die.

You little Guthix-damned sociopath. Finally I resort to appealing to his greed:

This kid is going to be running the place in twenty years, I guarantee it. I'm not worried about his extortionate demand for 100 coins, but I want to see if there's another solution so I try his brother. Weirdly, clicking on Wilough just takes me back into dialogue with Shilop. But weirdly, it changes: I was so surprised I spacebared through the dialogue, so no screenshots, but this time Shilop asks for 10 coins, and then his brother takes over with the request for 100 coins. That was...weird.

Out of options, I pay the little extortionists and am directed to the lumber yard north of Varrock. There's I'm reminded of Dwarf Cannon again: so many crates. Time to start searching. I didn't find anything in the crates on the first level, but I did spot a ladder, so I decide to check out the second floor. Naturally, Fluffs is just wandering around on the second level, and all my crate-searching was for naught. I try picking her up, but she scratches me (seems like normal behaviour from my history with cats). Let's go talk to Gertrude to see what she might want.

Gertrude says she might want either Doogle-seasoned sardines or a bucket of milk, so I acquire both and head back to Fluffs. I end up giving her both, but she still doesn't want me to pick her up. Now I'm prompted to investigate some mewling in the Lumber Yard, and I see this upon descending the ladder: 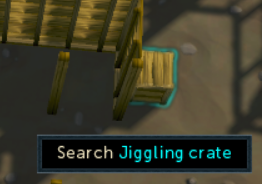 Thank you, Jagex; this is all I wanted. To what should be nobody's great surprise, I find kittens inside the crate. Now that I've found her offspring (the ones what she lost?), she runs home, and I follow. Gertrude gives me the two-second guide to raising cats (feed them, exercise them, play with them), and quest complete! 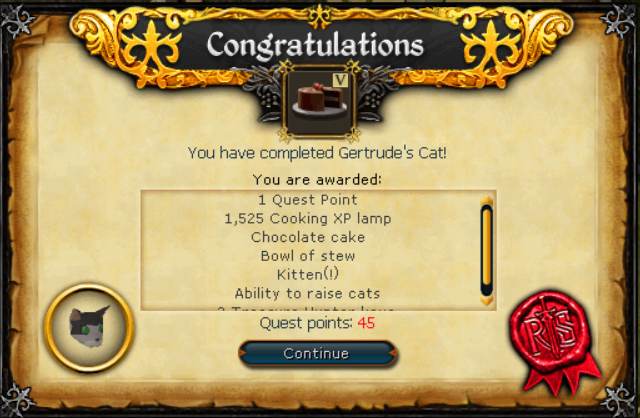 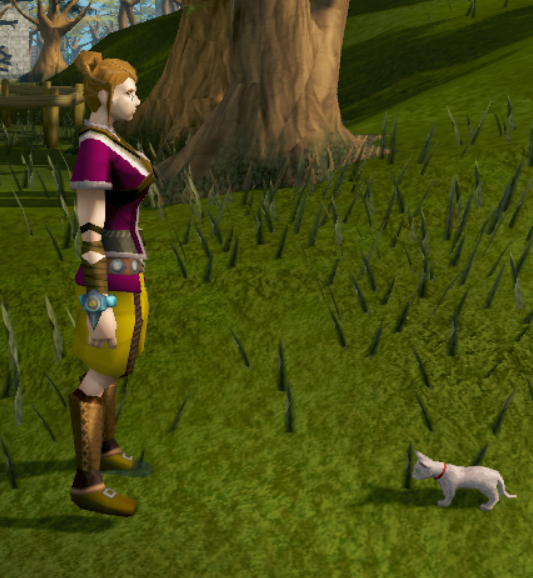 I will hug him and pet him and squeeze him and call him George. Actually I can't change the name of my kitten (I think that's a later quest reward? Or maybe it's only when it grows up into a cat), but now I have a kitten. D'awww.

Final analysis, this was a decent quest. It wasn't long or complicated, but it did it's job of introducing cats to the world, and was nice and tightly-designed around a simple core premise. This is basically what I wanted Dwarf Cannon to be, so I'm happy. And so is George.