The Legend of Xurdtwos/Death Plateau

I feel like I must have done the reworked version of this quest, since it came out in 2012 and I was definitely playing semi-actively in 2012, but I have no memory of it whatsoever.

We start out by talking to Commander Denulth (who the game seems to think I already know? This is possibly a reference to the now-removed Troll Warzone tutorial, which I never played). He's frustrated with how good of a defensive position the trolls have:

Foreshadowing...thinks about trolls for a moment and decides to do nothing.

Well, I'm glad to see that potion Cakemix was so keen on did its job (see the Druidic Ritual post if you don't get that joke).

Denulth tasks us with finding a way around the trolls, so his men can pincer them. A sound tactic, for which I am directed to the surly dwarf Sabbot. But before I get there, I have a quick chat with the guard blocking the way from Burthorpe to Death Plateau:

Anyway, Sabbot (after some prodding) reveals that I could get around the trolls by exploiting the natural caves running under Death Plateau. He seems to prefer this approach to going over the rocks, for some reason.

My memory of the original Death Plateau quest is hazy, but I do recall that climbing boots were a reward, so this feels like a jab at the earlier version of the quest. If so, I approve! I like these little jokes, as long as they make sense for the characters in-context, because they're fun Easter eggs for long-time players. They become problematic when they alienate newcomers, which thankfully this one doesn't (it's well contextualized by later conversations).

Before I can start digging, Sabbot directs me to his wife Freda, who's living in what used to be Tenzing's house. She has what I need, but in true Runescape fashion won't give it to me until I do something for her: in this case taking her climbing boots to Dunstan, the smith in Burthorpe, for repairs. This is largely pointless busy-work, but I don't mind it here because it serves a purpose: as Freda specifically points out, the goal is to train the player in the use of the Lodestone network (though she calls it the "Home teleport spell", since the Lodestone network as it exists was added after the rework). That job done, Freda gives me the location of where to dig: the wall in Sabbot's cave.

And now I have a nice cave to explore. This is good, I found in Observatory Quest that I actually rather like exploring caves. Though this one appears to be more of a linear path punctuated by Agility barriers, which is fine too. It's nicely interactive in the way I like these sorts of things to be, and it also nicely tutorializes the Agility skill by presenting a selection of common obstacles.

The other end of the cave lets out north of Death Plateau, prime ambush position. Unfortunately Twoie doesn't notice that someone is overhearing her slightly-racist tirade: 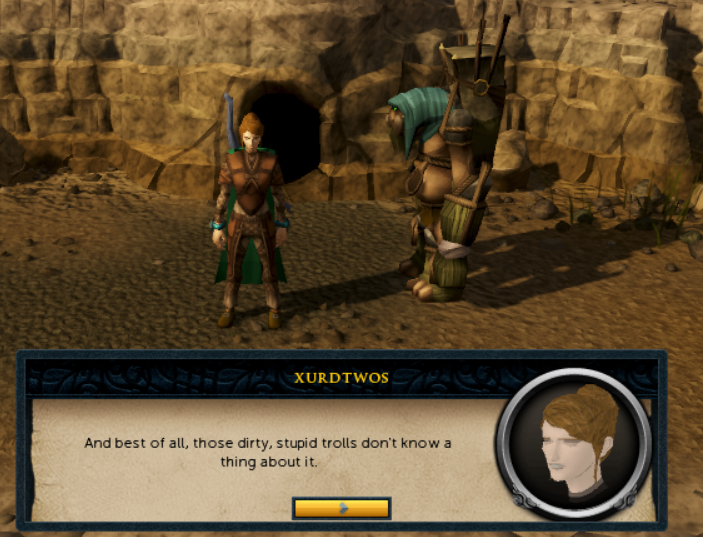 Aw-kward. Luckily The Map isn't a hostile troll, at least not to me. Apparently he responds to bullying by eating his tormentors alive, though, so that's good to know.

Oh, I guess he does eat passing adventurers as well. Okay, probably could have seen that coming. Luckily he's only level 2, so I one-shot him. Zip back to Denulth to hand in my report and, after a short cutscene in which I lead a small squad of archers to slaughter some trolls, quest complete! 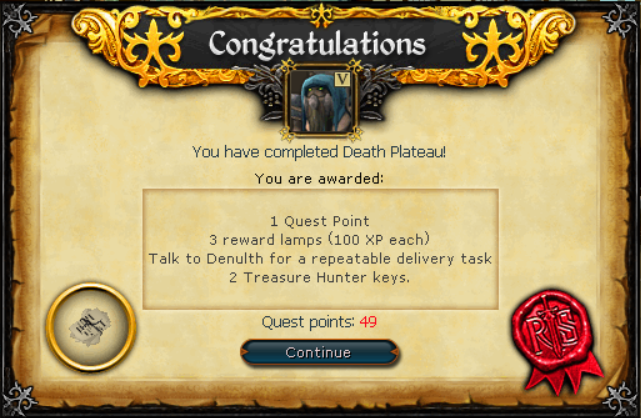 This wasn't much of a quest, but then it didn't need to be. In retrospect I'm fairly massively overlevelled for it, and should have done it as my first quest (or nearer to first). But it tutorialized a few useful concepts, which is all it needed to do.