The Legend of Xurdtwos/Broken Home

This is another quest that's going to defy my normal schtick, this time because it's very exploration-heavy and I (perhaps foolishly) didn't bother to keep detailed notes of my bumbling around the Gulvas Manor. Alas.

The hook for the quest is Maria, a sobbing maid standing outside a stately-yet-imposing manor house in Silvarea, the creepiest place in Misthalin. Seriously, I don't know what possessed someone to build a house here, but they did, and now apparently there's a ghost inside killing everyone. This is my shocked face. At Maria's behest, I relinquish all of my equipment to the conveniently-placed bank deposit box, and enter the manor in an attempt to subdue the evil spirit. All in a day's work.

I'm immediately a little put-off by the non-diegetic popup that appear when I enter the mansion:

As I've said many times, I don't generally like when the game has to give you information like this, though this isn't too egregious of an example because it's explaining changes to gameplay mechanics rather than conveying narrative or puzzle solutions. Still, it's a bit annoying, and I can think of better ways to communicate the same information in a less-obvious way:

I'm sure Jagex focus tested this quest to death, and this over-tutorialization was found to be necessary for player engagement, but it still grates a little.

Anyway, I want to talk about the map a little more, because I really liked it: 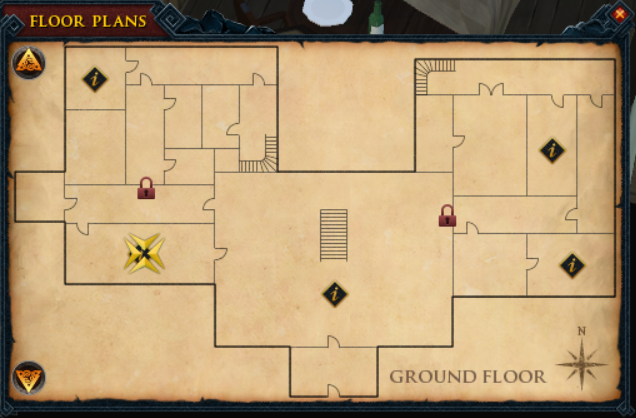 It's no secret that Broken Home draws heavy inspiration from the Resident Evil franchise, and that gameplay style really needs a good map, or else it gets unmanageably hard to remember "where was that locked door again?", which is especially annoying in a game where entering the wrong room can very quickly kill you. So I appreciated the layout of the manor, with indicators of locked doors and points of interest. I was worried going into this quest, because I've never really played survival horror games and my only experiences with this quest relied heavily on the wiki, but I found the map very helpful for navigating around.

I won't go through my journey in detail, because it was a lot of bumbling back-and-forth trying to remember which key went to which locked door. If you want a walkthrough, there's the wiki. Instead, let me present some highlights I picked out: 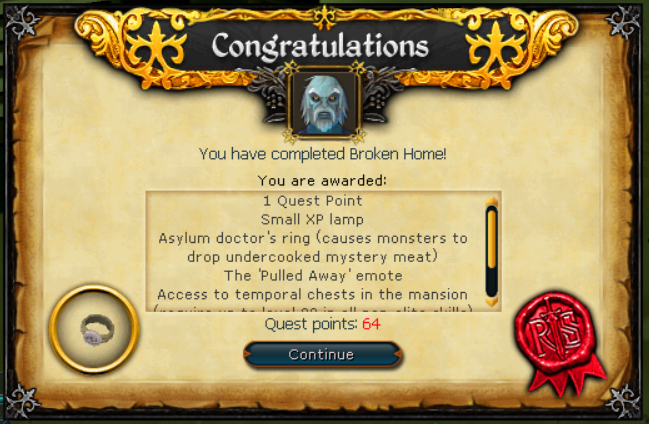 Final thoughts: I both liked and didn't like this quest. I didn't like it because it's not a gameplay style that appeals to me; I'm just not a survival horror fan. But that's not a flaw with the quest, which is actually very well designed. I also liked that it was experimentation that didn't feel like it was losing what Runescape was, in contrast to last time. Broken Home is very unlike any other content in Runescape, but it still felt like it fit into the tapestry of the game; I don't have the vocabulary to articulate why, but I liked it.

I also really liked the lore; despite being a bottle quest, it ties into the game's lore in lots of really interesting ways, some big and some small. I particularly liked the subtle tie-in to A Soul's Bane, which I also hinted at in the post for that quest; one day I hope to get a follow-up that ties it all together more explicitly, though I don't expect it to happen anytime soon.