The Legend of Xurdtwos/A Soul's Bane

I remember this being one of the weirder quests, which isn't necessarily a bad thing. It was structured as a dive through the different emotional states of one supremely messed-up dude, similar in some ways to the Stronghold of Security. I'm down for some weird stuff, so I'm game for this quest.

We start off talking to Launa, an old woman standing next to a disconcerting-looking crack in the ground. She says that her husband went into the rift to look for their son, Tolna, but when we offer to help look she doesn't know what her son looks like.

So, this is the darkest thing Runescape's done so far in Twoie's journey, and possibly in the game's entire history, but it's dark in a way that's kind of weird for this game. I'm struggling to think of anything else in the game like this, focused on a very adult fear and with symbolism heavily rooted in mental health and depression. It's interesting, don't get me wrong, and I like it, it's just a little odd.

The first phase of the dungeon is Anger, which is an interesting combat puzzle. There are four unique weapons on a rack by the door, and four different monsters. Each monster can only be damaged by one (and only one!) of the anger weapons. This is an interesting puzzle, but my problem with it (which is a recurring problem with these early quests, I'm finding) is that it's not signposted well. I like that you get a message saying "you can't damage this creature", which indicates that you're doing the wrong thing, but there's nothing I found that points you to the weapons rack (which is easy to miss, especially since nothing else in the game really uses this mechanic).

Also, general observation that this quest brings to mind: I never until this moment realized how much I appreciate the graphical improvements Runescape has gone through in the last fourteen years. I'm not normally one to complain about graphics, but look at this old unicorn model: 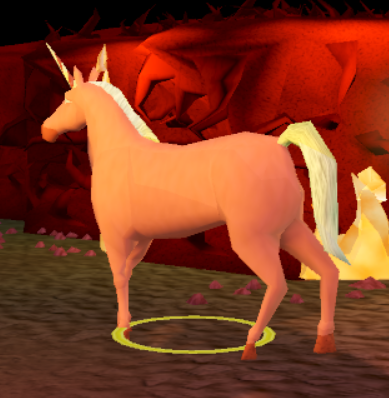 Anyway, conquering Tolna's anger leads to a cutscene, where we see a little bit of the history that led Tolna into the rift. I rather like this for storytelling, revealing bits of the backstory as we progress through the quest, but this scene is made slightly absurd by the fact that Tolna has the same chathead as Gertrude's nine-year-old son:

I'm fully prepared to admit that, as a straight white man from an upper-middle-class background in a wealthy nation, the following comment is almost certainly evidence of my overwhelming ignorance of the realities of poverty, but holy shit Tolna, you're a literal child, and you're complaining about your low wages? This is a very serious plot that the game seems to expect us to take seriously as well, and if Tolna weren't visibly a child it would absolutely be more serious. But as it stands, it reads like a little kid complaining about his allowance and running away from home. It's possible that was the intention, but I somehow doubt it.

We move from here to the Fear room, where there's one black hole I can't go through (I'm too scared), and a bunch of merely dark holes I can look through. Looking through them sometimes summons a fear reaper, and killing one makes Twoie exclaim how much less scared she is. Okay, I think I can figure out this puzzle. Not much to say about it otherwise, so on to the next room.

Next is the Confusion room, which is where the puzzles start getting interesting again. The basic puzzle loop is this: we have a number of doors, none of which appear to lead anywhere, and a bunch of monsters. Only one of the monsters is "real" (the rest don't take damage, but vanish after a certain amount of time in combat), and killing it removes a door and re-fills the room with monsters. Repeat until only one door remains. It's an interesting twist on the "kill all the things to unlock the door" puzzle, which is essentially what the Fear room was as well, but it's not tremendously complex. It's decently signposted in that "killing" a fake monster gives you a feedback message saying that it wasn't real. Not much else to say about this puzzle, so moving on.

The next room, the Hopelessness room, is what broke me on the quest. The initial puzzle set-up is that there's a chasm you can't cross, and a bunch of monsters on this side of the chasm. I think I know what to expect at this point, so I start attacking monsters. But there's a catch: when I get them down to 0 health, they regenerate. That, coupled with their high defence (and my relatively low stats) and the fact that I'm using magic and abilities like Dragon Breath (which hits multiple enemies, causing them to gang up on me) means I wasn't able to figure out the solution before having to flee and heal. To my shame, I went to the wiki again: apparently these monsters have three "lives" before they're permanently killed. Okay, that's a decent puzzle. The trouble is that they're supposed to get visually smaller as you go through their lives, and I wasn't seeing that. I'm not sure if that's because:

Or some combination of all of the above, I'm not sure. Either way, it would have been nice to have a secondary indication that I was having an effect; a message of some kind like what the Confusion beasts had. I suppose that may have ruined the atmosphere of hopelessness the developers were going for but, as I've said before, sometimes narrative consistency can be taken too far. Anyway, the wiki also says that using food heals the monsters, so I'm going to need to level up my magic a bit before I can comfortably take them on. Hold on folks, be back soon.

On my second attempt, since I'm looking for it, I do see the monsters shrinking. The first one is almost imperceptible, but the second is fairly dramatic. I must have just not noticed because I was in a massive crowd of them and slightly panicking. It's also annoying that you don't keep attacking them after they transition, but that I know is an engine limitation (and one that can be fixed, but it has to be done individually per-monster; see Crystal Shapeshifters). But this time I managed to find some safespots, and killed them all with very little trouble and summon the bridge to the next area.

The next room, incidentally, appears to be Tolna himself, or some other aspect of him. 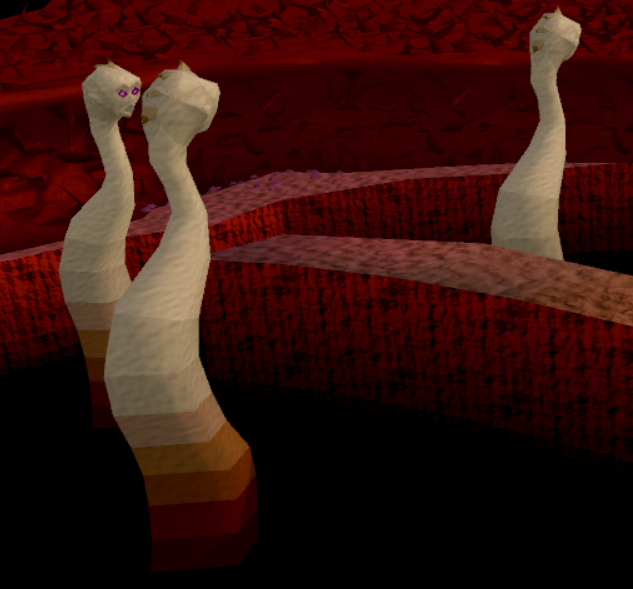 Really? I wasn't getting that at all.

Jokes aside, there's a touch here I rather like: the demonic version of Tolna doesn't have a chathead. This is something Jagex typically only does for truly otherworldly characters (Guthix, for instance), and I like its use here: it emphasizes how inhuman Tolna has become, or possibly how this creature isn't actually Tolna (interesting implications in light of Broken Home).

25 Magic now, and back for my rematch. It was a bit of a shitfight, but with aid of a bunch of trout I won from Treasure Hunter, I was victorious, and finally got to talk to the real Tolna.

Foreshadowing morphs into a giant-snot ball and eats a small child. Foreshadowing is vaguely disgusted with itself.

This isn't the first reference to Senntisten put into the game (I believe The Dig Site quest holds that record), but it is an interesting one. It's especially interesting to look at in hindsight, now that we know more about the culture and politics of the Zarosian empire. I remember there being an assumption at the time (among players, at least) that Zaros was a god of evil, even worse than Zamorak (hence why Zamorak feared him, which was established in the non-longer-canon God Letters). Seeing things though that lens, Tolna's experience makes sense: evil remains of an evil city.

But, over time, the characterization of the gods shifted. In more recent storytelling, Zaros is more a god of "order to the exclusion of all else." It makes him come across rather callous, but I would say it's hard to call him "evil" in any meaningful sense. But we can still salvage Tolna's experience, from one of two directions:

I hope this gets picked up in current storytelling, though since it's not strictly related to the Elder Gods I somewhat doubt it will be.

Anyway, a couple more conversations with Tolna and his father, and quest complete! 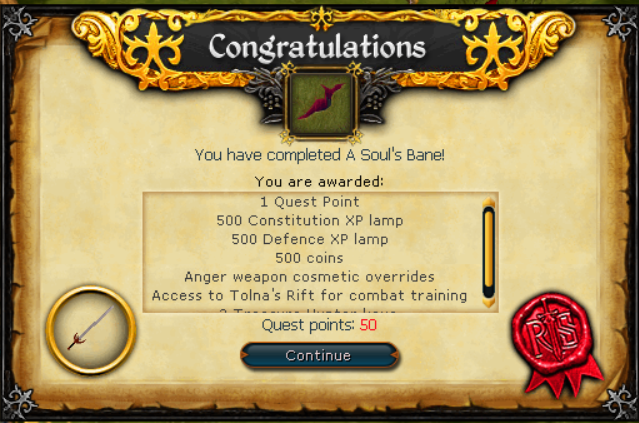 This was an interesting quest. The story had good ideas, but was let down (in my opinion) by the oddly-mature characterization of Tolna as a child, though the symbolism was deeply fascinating. The puzzles were an interesting experiment in combat-oriented puzzles (as opposed to the more adventure game-style puzzles that are more common in quests), though I don't think they entirely worked; part of the problem is that they're very repetitive, so once you've figured out the solution you still have to go through the motions another dozen times or so.

I would classify this as an "experimental" quest, and one with some very good ideas. Unfortunately I don't think those ideas were expanded on too much in later quests, though I look forward to seeing if I'm proven wrong.