The Legend of Xurdtwos/A Shadow Over Ashdale

I'm not going to do my usual gimmick here, where I basically walkthrough the quest giving thoughts on it, because this is a very short quest without much going on, and I didn't really have any jokes. Instead, I want to talk about some of the design decisions made during this quest, and why (spoilers) I ended up not liking it very much.

First thing that needs to be said, in the positives column, is that this is a gorgeous looking quest. The environment artists seriously earned their keep on this one. There's a lot of visual personality in Ashdale, and it all looks ever-so-subtly different in the quest instance; very well done.

Another decision I liked was that the combat scales according to your level; it's nice because it makes the quest sufficiently challenging to be interesting, even to higher-levelled players. In comparison to The Blood Pact, where I was one-shotting all the bosses, this time I actually had to make use of the provided minnows; nearly emptied my inventory on Agoroth, too, though that was mostly because the animation for his AOE attack kicked in slightly too late for me to dodge it.

Part of the problem is that, as pretty as Ashdale is, it feels very empty. "Duh, Xurdones," I hear you saying, "Of course it's empty, the point of the quest is that everyone's gone missing." That's right, I can hear what you're saying. Yes, even that.

...that wasn't a very good joke, was it? This is what Ashdale has reduced me to.

Anyway, it's not the lack of NPCs that make Ashdale feel empty, and it's not even the lack of players (seriously, if you ever want to get away from the playerbase, go visit Ashdale; it's a ghost town). I think the problem is that it's too efficient: everything present is there for a particular purpose, and anything extra has been sanded away. During the entire quest, there are four interactable objects that don't advance the narrative (I think seven if you count all of the sewer rats individually). There's no flavour to anything.

Part of what I love in Runescape is examine dialogues. I like reading the examine texts on things, because there's frequently either a joke or a piece of worldbuilding. Miss Alaska blew my mind in January when she posted the examine text of the Stone of Jas aquarium plug (that's right, the one from your POH Aquarium) on Discord:

That's an extreme example, but it's not the only one. There are a lot of little details in the examine texts, and it helps make the game feel like it's bigger than my needs as a player. But Ashdale has none of that, apparently by design; Mod Stu, who worked on the Ashdale content, mentioned on a livestream recently that he was actually asked to remove all of those "extraneous" details by the project designer. My heart died a little when I heard that, because it creates an environment that's free of distraction but also free of anything to engage the player on a deeper level than "go here, then here, then here, then win."

Relatedly, and this is a shorter complaint, the quest was very linear. There's basically nothing to explore beyond the areas that are immediately conducive to the quest. This is sort of explained organically by the townspeople putting up barricades in a vain attempt to stop the Crassians, but it did grate a little bit. I understand keeping the quest in a contained area; you don't want any puzzle, especially not a novice puzzle, spanning too far or else the solutions become too diffuse, but restricting us to the critical path and nothing but the critical path is going too far the other direction: we're not really doing anything, we're just following the trail like good little sheep. This probably wouldn't have felt as egregious if it was the first quest I did, as was presumably the intention on release, but it grates now in contrast to other early-game quests like Cook's Assistant or the various Burthorpe quests.

On a somewhat related note, another design decision I hated was the quest's tendency to take control of the camera to focus on certain things. I think the first time it happened was when I went inside a house, and the camera focused on Lucy sitting inside. That didn't bother me too much, nor did the second time I noticed it, during the first Crassian Warrior puzzle, where the camera panned over the cave route to show me the lever. But when I noticed that it kept doing that, I just about lost my shit.

I'm not inherently opposed to using the camera to draw the player's attention to certain important elements. On some level it's both a sign of weak design ("rather than use visual or gameplay elements to naturally guide you to the solution, we're just going to show it to you") and a tad insulting to the player ("we know you're not smart enough to figure it out, so here's the answer"), but I don't immediately despise it because it can be a useful way of tutorializing, especially when introducing new concepts or gameplay styles to players who might not be familiar. But that breaks down when you show the solution to every puzzle. Show the first one, maybe the second as escalation kicks in, but then give us some credit to figure it out on our own. We're going to have to do it later in the game anyway, so might as well train that instinct now, in low-risk environments.

It was particularly annoying when the camera kept lingering on the barriers dissolving as I killed Crassians. Come on, Game, I think I can be trusted to figure out that "killing the weird things" = "door to progress opens" after at least the third go; I don't need you to keep showing me on room five or six.

And that's basically all there was to the quest: follow the linear path, solve some puzzles we've basically given you the solutions to, and then fight a boss. 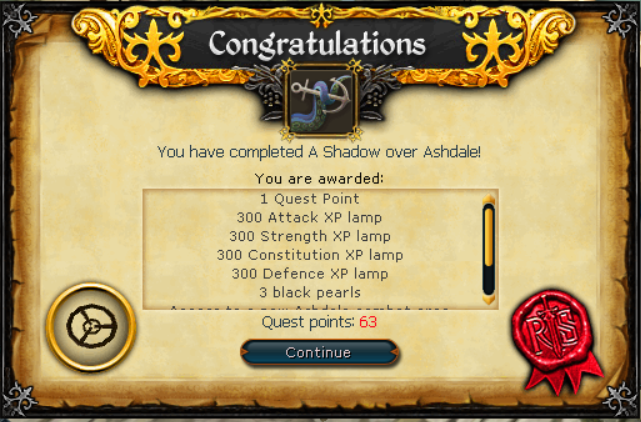 Actually, one other complaint. One of the quest rewards was a small stack of BXP-giving items, which is fine; makes sense to tutorialize that, and since this is a free-to-play quest there's some member's upsell opportunity. I'm fine with that. What annoyed me was what happened when I tried to use the second one:

What the shit, Game? You've given me these things, why won't you let me use them? I can't conceive of a good reason these should be time-gated: the only thing I'm coming up with is "well, maybe players will dump them on a skill they didn't intend, so we'll make them think about it before they can." But it's not like BXP-giving items are rare in this game (for non-Ironmemes, anyway); give people room to screw up, especially on things with low consequences, and they'll learn and engage better with the content.

Maybe there's some real reason for this decision that I'm not thinking of, and if there's a good one then I'll eat my words, but as it stands it just feels weird and kind of insulting.

And that's basically the impression this quest left me with: it was a game of connect-the-dots (where the dots are walk locations for the pathfinding algorithm) broken up by puzzles that were solved for me, and a little bit of combat.

Here's the thing that really bugs me, though: for all I've complained, none of these "issues" are inherently bad. They're perfectly fine, depending on what kind of game you want to make. My brain keeps going to a criticism I've heard about the later Call of Modern Warfare games (which I haven't played, so I make no judgements as to this statement's veracity; it's just a useful comparison to this situation), that they're just linear sequences of setpieces that will flat out play themselves if you let them, threaded onto a story with the integrity of wet toilet paper. That's fine, because I don't think people are going into those games with the same expectations as they would a good novel or a Dark Souls game: they're not looking for an engaging story, they're not looking for challenging gameplay, they just want to blow off some steam by mowing down thousands of meaningless pixel-enemies. There's nothing wrong with that, everybody needs to turn their brains off sometimes.

But that's not why I play Runescape, it's not what I want the game to be. If this is the direction the game is headed, then all love to Jagex (I don't blame them; they need to keep the lights on), but this is where I get off.

Luckily, I don't think this was a permanent change of direction for the game. Next up is Broken Home, which came out just a few months after this quest and went in a vastly different direction. So don't worry, this isn't me signing off forever; see you next time, folks.