Dennis is one big noob that can't even spell his own name and that has been around for more than 10 years now!

The start of an adventure

I started playing Runescape as early as 2005. Back when I was 8 years old my best friend and I used to check out the internet for fun minigames. One day he came across Miniclip and he informed me of a game where you could be a knight. This intrigued me and when we went back to my house after a schoolday he showed me the website and we made an account. Our adventure sadly stranded quite quickly on Tutorial Island. English is not my first language and at the age of 8 I had absolutely no idea what was meant by prospecting a rock. It wasn't until a couple months later I figured out that I could right click the rock and continue on my adventure.

Much of my memories from this period are hazy and vague. I have had a couple of accounts here and there before I created 'Denniz'. I do remember taking part in the christmas event of 2005 and I also remember the easter event granting us the chicken costume. But Perforo / Denniz was not created until september of 2007. I was still clueless back then as I was only 10 years old, but I had already developed a penchant for questing. I loved reading the funny little stories Jagex had written by then. I remember dying to Elvarg a bunch, meeting Zanik for the first time and getting my ass handed to me by the entire population of Ape Atoll.

It wasn't until late 2011 that I heard about Clan Quest for the first time. I was honing my mining skills in the Lava Flow Mine for Ritual of the Mahjarrat. It was one of my final few quests left for the quest cape. During my time there I enjoyed taking part in conversation with the people who were also mining there. One of those conversations was with captainmeta4. We spoke a lot about our shared passion for questing and he informed about this clan he was in. At the time I was not part of a clan and I told him I'd be more than happy to come and check them out. Only a few moments later Skills2quest invited me in the clan. Four years after the creation of my account I was finally at a place I could call home.

My time in Clan Quest

I have been part of Clan Quest for more than 10 years as of writing this. As this has been quite a chunk of my lifetime it is safe to say that I have forged friendships here for life and that I have come to see some of the people I've interacted with over the years as family. I have come across countless players and I have seen them come and go. I sure miss a whole heap of you retired Clan Questers. Even though the chances are extremely slim that I will ever speak to those of you again, I will always cherish the memories we've made along the way.

I sure have some memories of my time in Clan Quest. Inauguration ceremonies in white knight armour with our quest capes out. Weekly Tears of Guthix sessions hosted by Tohtli which always had an impressive attendance. Training Dungeoneering with Ytse, Santa and plunder unit. Ytse I will never forget that one time you yelled at someone leeching a dungeon, that was comedy gold. Having lore discussions with people like Wolfie, Infinity4, Dirty Rain, Mizu Katana and Miss Alaska. Even though I have a love for questing, they sure did pay a lot more attention to hidden details and conversations. Going up against Vorago with viperxk. Racing to max cape with Nicole Angel. Duelling with Karen Angel. There have just been so many unique experiences over the years, it's almost toomany to name, let alone to remember!

As is a common theme amongst most Runescape players. I too have known my fair share of breaks. Sometimes the game just doesn't grasp you that well, and then it is time to say goodbye for a little while. But even though I have been away for as long as years at a time, Clan Quest has always welcomed me back with open arms. That is something I deeply cherish about this clan. No matter where you are from or who you are, they'll always accept you. :)

In the more recent future I have been enjoying the game a lot more again. I think this mostly has to do with the clan discord. I absolutely love to hang in RS Voice and chat with my clanmates. Nothing gives me a good laugh like goofing around with Zodiac, Nordic, Shiro, Derp, Alaska, Irons, Dustea and Irons. Back in the day I was always a bit too shy for programs like Teamspeak or Ventrilo, but since I've grown older I embrace any opportunity I can take to hang with clannies. May it be with an hour of Croesus and making fun of Derp or just hanging out in general and staying awake till 4am with Zodiac. A wish of mine is to visit Runefest one day and meet some of you fine folk in real life. Surely 10 years is long enough of a wait to finally put a face to that name?

After 10 years of being in the clan I also have recently joined the guild council, which felt like quite an honor. I never really thought I was deserving of a position like this due to childish behaviour in the far past, but I felt very warm inside when I was considered to be nominated and even made the cut. I'm very grateful and I hope that in the coming years I can provide a lot of cheer in clan chat and fun events to partake in for the clan. May that be in the form of pvm'ng or just silliness in general.

A place noone can pronounce

I was born and raised in a place called Groningen in the Netherlands. As of writing my wiki page I'm 24 years old and I am currently studying Psychology. I've had a passion for video games and computers from a very young age. We got a Playstation 1 when I was 5 and our first computer when I was 6. It was love at first sight! Over the years I have been the owner of all Playstation consoles and even an XBOX 360. Amongst my all-time favorite titles are Ratchet & Clank, Jak & Daxter, The Warriors, Red Dead Redemption, The Last of Us, God of War, Payday 2, Days Gone, Witcher 3, World of Warcraft and ofcourse Runescape.

Whenever I crawl away from my computer or console I love hiking and exploring our nearby forest. It's refreshing to sometimes just go off the grid and sniff in nature at it's core. Besides that I also enjoy a good book here and there, I'm quite fond of a good movie or tv show and I absolutely love raving, going clubbing, drinking or going on holiday with my dear group of friends.

The never ending journey of studying

Over the years I found it quite difficult to figure out what I exactly wanted to get out of life and what I wanted to pursue. Back when I was 17 years old and I had finished my HAVO I had no idea what to do, so I decided that the best course of action was to follow in the footsteps of one of my best friends and go ahead and study Business Economics. Let's just say that this was not really my cup of tea.

After that poor judgement call I figured I could try IT, I mean, I had been gaming my entire life right? So why not? Well it turns out that I am exceptionally terrible at programming so that went south as well.

Since at this point my passion was still gaming I figured I could give Game Design a shot. So I did, and surprisingly, I was quite good at it. I made it until the third year with flawless grades and I was having quite a bit of fun. Except this study got interrupted quite unexpectedly. I started experiencing chest pains out of nowhere and this got me very hypochondric. I was concerned I was going to die of a heart attack and this made me get panic attacks during the daytime but also in my sleep. This made me miss a bunch of college work in my third year because I just wasn't able to get proper sleep or focus on my assignments. I decided to consult a psychologist and she was able to quickly discern what was going on. I had anxiety. I was subconsciously terrified of the ability of finding a job in the Game Design field. These thoughts kept repeating themselves over and over again and caused me to physically experience discomfort and pain. After a few sessions with my psychologist she recommended me to look inside and really consider what I actually want. I decided that it wasn't healthy to continue on like this. If finding a job was my main concern I had to change course and think about my health. I dropped out of Game Design and enrolled for something that had always fascinated me: Psychology.

I had always been reading psychologic books and had always been interested in behavioural change. The sessions with my psychologist offered me the insight of seeing how comforting it can be to finally figure out what is wrong / going on with you. I want to be able to help out people and give them the answers they are looking for so that hopefully they may experience this same comforting feeling. I'm by no means an expert or licensed in any way, at least not yet :P, but if you ever wish to vent or are struggling with something, feel free to reach out to me either in-game or via discord. I will always be up for listening to you.

But what about Runescape?

I have always been very completionist-centric in Runescape. Even going back to the days of when I began. I always wanted to do everything I could do and experience everything I coul experience. I think that is also partially responsible for my love of quests. I wanted to complete the quest list. I really can't quite explain what it is that makes me this way. It happens in almost any game I touch. If there are things to collect, achievements to complete or levels to beat I want to do it. I am well aware that Runescape is an MMORPG and due to the ever-evolving nature of the game it is almost impossible to 'complete' Runescape. Yet I still go on. Even though there are some absurd achievements or feats in this game, I push on.

I have been the owner of a completionist cape since 2014 and I managed to trim it in 2019 after a long hiatus to play World of Warcraft. The journey doesn't stop there though. One of my main goals is max runescore. As of writing this page I am at 28.700 runescore out of the possible 29.715. Stuff that remains includes 9 out of 10 of the Daredevil feats, reaching world 200 in Shattered Worlds ( Currently at 139 ), showing Lanthus a full set of Profound and killing Solak, Vorago, Zuk, AoD and both Raid Bosses a 100 times.

Besides going for achievements I also enjoy pursueing some of the more obscure things in Runescape. Like getting 1m of all ports resources, getting the 'Very Good Baiter' title from Big Game Hunter and getting virtual level 120 in all skills ( Currently 15/28 ). I usually tend to send hard to reach yearly goals for myself but for some odd reason I keep beating my expections and actually achieving what I set out to do. 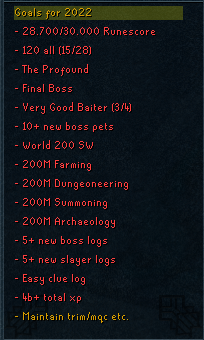